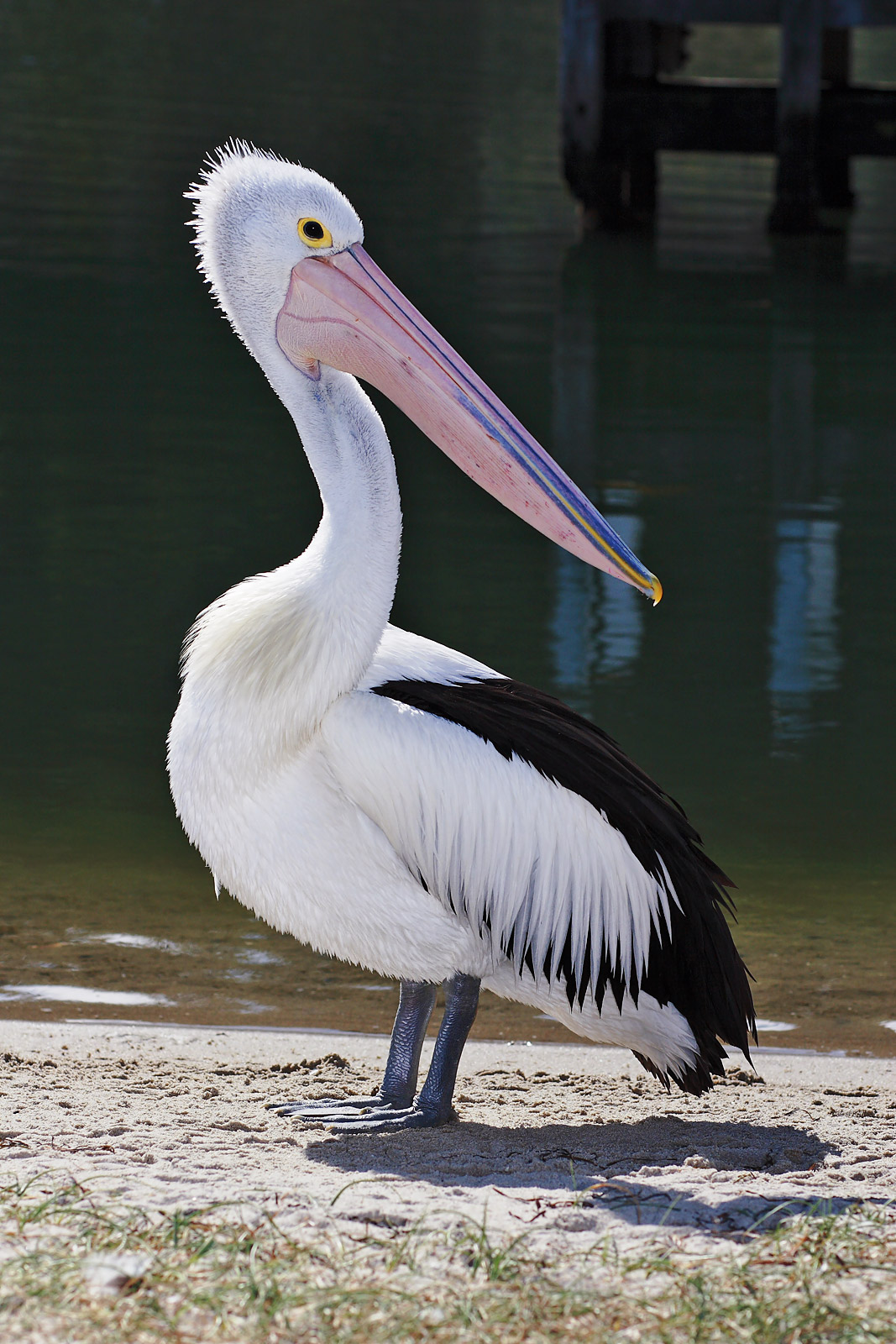 A pelican is a large water with a distinctive pouch under the beak, belonging to the family Pelecanidae.

Along with the s, s, s, boobies, s, and s, pelicans make up the order Pelecaniformes. Modern pelicans are found on all continents except . They occur mostly in warm regions, though breeding ranges reach 45° south (, "P. conspicillatus") and 60° North (s, "P. erythrorhynchos", in western ).

Pelicans swim well with their short, strong legs and their feet with all four toes webbed (as in all birds placed in the order Pelecaniformes). The tail is short and square, with 20 to 24 feathers. The wings are long and have the unusually large number of 30 to 35 secondary s. A layer of special fibers deep in the breast muscles can hold the wings rigidly horizontal for gliding and soaring. Thus they can exploit s to commute over 150 km (100 miles) to feeding areas.

Pelicans rub the backs of their heads on their s to pick up its oily secretion, which they transfer to their plumage to waterproof it.

The pelicans can be divided into two groups: those with mostly white adult plumage, which nest on the ground (Australian, Dalmatian, Great White, and American White Pelicans), and those with gray or brown plumage, which nest in trees (Pink-backed, Spot-billed, and Brown, plus the , which nests on sea rocks). The Peruvian Pelican is sometimes considered conspecific with the Brown Pelican.

The regular diet of a Pelican usually consists of , but they also eat amphibians, crustaceans and on some occasions, smaller birds. [cite news |title = Pelican swallows pigeon in park|url = http://news.bbc.co.uk/1/hi/england/london/6083468.stm|publisher = |date = |accessdate = 2006-10-25] [cite news|title = Pelican's pigeon meal not so rare|url =http://news.bbc.co.uk/1/hi/england/london/6098678.stm|publisher = |date = |accessdate = 2007-05-07] They often catch fish by expanding the throat pouch. Then they must drain the pouch above the surface before they can swallow. This operation takes up to a minute, during which time other seabirds are particularly likely to steal the fish. Pelicans in their turn sometimes pirate prey from other seabirds.

The white pelicans often fish in groups. They will form a line to chase schools of small fish into shallow water, and then simply scoop them up. Large fish are caught with the bill-tip, then tossed up in the air to be caught and slid into the gullet head first.

The Brown Pelican of North America usually plunge-dives for its prey. Rarely, other species such as the Peruvian Pelican and the Australian Pelican practice this method.

A Pelican in St. James' Park in London was once filmed eating a fully grown Pigeon alive.

Pelicans are gregarious and nest colonially. The ground-nesting (white) species have a complex communal courtship involving a group of males chasing a single female in the air, on land, or in the water while pointing, gaping, and thrusting their bills at each other. They can finish the process in a day. The tree-nesting species have a simpler process in which perched males advertise for females.

In all species copulation begins shortly after pairing and continues for 3 to 10 days before egg-laying. The male brings the nesting material, ground-nesters (which may not build a nest) sometimes in the pouch and tree-nesters crosswise in the bill. The female heaping the material up to form a simple structure.

Parents of ground-nesting species have another strange behavior: they sometimes drag older young around roughly by the head before feeding them. The young of these species gather in "pods" or "crèches" of up to 100 birds in which parents recognize and feed only their own offspring. By 6 to 8 weeks they wander around, occasionally swimming, and may practice communal feeding.

Young of all species fledge 10 to 12 weeks after hatching. They may remain with their parents afterwards, but are now seldom or never fed. Overall breeding success is highly inconsistent.

Pairs are monogamous for a single season, but the pair bond extends only to the nesting area; mates are independent away from the nest.

The Dalmatian Pelican and the Spot-billed Pelican are the rarest species, with the population of the former estimated at between 10,000 and 20,000 [IUCN2006|assessors=BirdLife International|year=2006|id=16487|title=Pelecanus crispus|downloaded=11 May 2006] and that of the latter at 13,000 to 18,000. [IUCN2006|assessors=aut|BirdLife International|year=2004|id=16491|title=Pelecanus philippensis|downloaded=10 May 2006] The most common is believed to be the Australian Pelican (though some estimates have placed the White Pelican at a higher population).

From the record, [ [http://wiki.cotch.net/index.php/Pelecaniformes EvoWiki: Pelecaniformes] .] it is known that pelicans have been around for over 40 million years, the earliest fossil "Pelecanus" being found in early deposits in France. Prehistoric genera have been named "Protopelicanus" and "Miopelecanus". The supposed pelican "" from Argentina is a "", being based on hitherto indeterminable fragments.

A number of species are also known from the extant genus "Pelecanus":

In medieval , the pelican was thought to be particularly attentive to her young, to the point of providing her own blood when no other food was available. As a result, the pelican became a symbol of the Passion of and of the . It also became a symbol in bestiaries for self-sacrifice, and was used in ("a pelican in her piety" or "a pelican vulning (wounding) herself"). Another version of this is that the pelican used to kill its young and then resurrect them with its blood, this being analogous to the sacrifice of Jesus. Thus the symbol of the (IBTS) is a pelican, and for most of its existence the headquarters of the service was located at Pelican House in Dublin, Ireland.

For example, the emblems of both and are pelicans, showing its use as a medieval Christian symbol ('Corpus Christi' means 'body of Christ').

Likewise a folktale from says that a pelican killed her young by rough treatment but was then so contrite that she resurrected them with her own blood.

These legends may have arisen because the pelican used to suffer from a disease that left a red mark on its chestFact|date=February 2007. Alternatively it may be that pelicans look as if they are stabbing themselves as they often press their bill into their chest to fully empty their pouch. Yet other possibilities are that they often rest their bills on their breasts, and that the Dalmatian Pelican has a blood-red pouch in the early breeding season.

* [http://www.catholicherald.com/saunders/03ws/ws031120.htm The Symbolism of the Pelican] article in the Arlington Catholic Herald.
* [http://ibc.hbw.com/ibc/phtml/familia.phtml?idFamilia=15 Pelican videos] on the Internet Bird Collection