Dolomite
This article is about the rock and mineral. For other uses, see Dolomite (disambiguation). 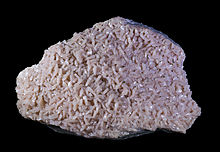 /ˈdɒləmaɪt/) is a carbonate mineral composed of calcium magnesium carbonate CaMg(CO3)2. The term is also used to describe the sedimentary carbonate rock dolostone.

Dolostone (dolomite rock) is composed predominantly of the mineral dolomite with a stoichiometric ratio of 50% or greater content of magnesium replacing calcium, often as a result of diagenesis. Limestone that is partially replaced by dolomite is referred to as dolomitic limestone, or in old U.S. geologic literature as magnesian limestone. Dolomite was first described in 1791 as a rock by the French naturalist and geologist, Déodat Gratet de Dolomieu (1750–1801) from exposures in what are now known as the Dolomite Alps of northern Italy.

The mineral dolomite crystallizes in the trigonal-rhombohedral system. It forms white, gray to pink, commonly curved (saddle shape) crystals, although it is usually massive. Unlike calcite, dolomite is a double carbonate, having a different structural arrangement, and it does not rapidly dissolve or effervesce (fizz) in dilute hydrochloric acid unless it is scratched or in powdered form. Crystal twinning is common. A solid solution series exists between dolomite and iron rich ankerite. Small amounts of iron in the structure give the crystals a yellow to brown tint. Manganese substitutes in the structure also up to about three percent MnO. A high manganese content gives the crystals a rosy pink color noted in the image above. A series with the manganese rich kutnohorite may exist. Lead and zinc also substitute in the structure for magnesium. 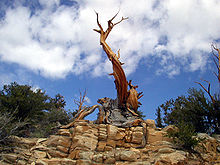 Vast deposits are present in the geological record, but the mineral is relatively rare in modern environments. Laboratory synthesis of stoichiometric dolomite has been carried out only at temperatures of greater than 100 °C (conditions typical of burial in sedimentary basins), even though much dolomite in the rock record appears to have formed in low-temperature conditions. The high temperature is likely to speed up the movement of calcium and magnesium ions so that they can find their places in the ordered structure within a reasonable amount of time. This suggests that the lack of dolomite that is being formed today is likely due to kinetic factors, i.e. due to the lack of kinetic energy or temperature.

Modern dolomite does occur as a precipitating mineral in specialized environments on the surface of the earth today. In the 1950s and 60s, dolomite was found to be forming in highly saline lakes in the Coorong region of South Australia. Dolomite crystals also occur in deep-sea sediments, where organic matter content is high. This dolomite is termed "organogenic" dolomite.

Recent research has found modern dolomite formation under anaerobic conditions in supersaturated saline lagoons along the Rio de Janeiro coast of Brazil, namely, Lagoa Vermelha and Brejo do Espinho. One interesting reported case was the formation of dolomite in the kidneys of a Dalmatian dog.[5] This was believed to be due to chemical processes triggered by bacteria. Dolomite has been speculated to develop under these conditions with the help of sulfate-reducing bacteria (e.g. Desulfovibrio brasiliensis).[6][7]

The actual role of bacteria in the low-temperature formation of dolomite remains to be demonstrated. The specific mechanism of dolomitization, involving sulfate-reducing bacteria, has not yet been demonstrated.[8]

Dolomite appears to form in many different types of environment and can have varying structural, textural and chemical characteristics. Some researchers have stated "there are dolomites and dolomites", meaning that there may not be one single mechanism by which dolomite can form. Much modern dolomite differs significantly from the bulk of the dolomite found in the rock record, leading researchers to speculate that environments where dolomite formed in the geologic past differ significantly from those where it forms today.

Reproducible laboratory syntheses of dolomite (and magnesite) leads first to the initial precipitation of a metastable "precursor" (such as magnesium calcite), to be changed gradually into more and more of the stable phase (such as dolomite or magnesite) during periodical intervals of dissolution and reprecipitation. The general principle governing the course of this irreversible geochemical reaction has been coined Ostwald's step rule.

For a very long time scientists had difficulties synthesizing dolomite. However, in a 1999 study, through a process of dissolution alternating with intervals of precipitation, measurable levels of dolomite were synthesized at low temperatures and pressures.[9]

Dolomitization of calcite also occurs at certain depths of coral atolls where water is undersaturated in calcium carbonate but saturated in dolomite. Convection created by tides and sea currents enhance this change. Hydrothermal currents created by volcanoes under the atoll may also play an important role. 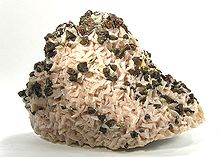 Dolomite is used as an ornamental stone, a concrete aggregate, a source of magnesium oxide and in the Pidgeon process for the production of magnesium. It is an important petroleum reservoir rock, and serves as the host rock for large strata-bound Mississippi Valley-Type (MVT) ore deposits of base metals such as lead, zinc, and copper. Where calcite limestone is uncommon or too costly, dolomite is sometimes used in its place as a flux for the smelting of iron and steel. Large quantities of processed dolomite are used in the production of float glass.

In horticulture, dolomite and dolomitic limestone are added to soils and soilless potting mixes to lower their acidity and as a magnesium source. Home and container gardening are common examples of this use.

Dolomite is also used as the substrate in marine (saltwater) aquariums to help buffer changes in pH of the water.