Zinc
This article is about the metallic element. For other uses, see Zinc (disambiguation). 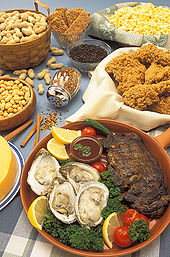 The concentration of zinc in plants varies based on levels of the element in soil. When there is adequate zinc in the soil, the food plants that contain the most zinc are wheat (germ and bran) and various seeds (sesame, poppy, alfalfa, celery, mustard).[171] Zinc is also found in beans, nuts, almonds, whole grains, pumpkin seeds, sunflower seeds and blackcurrant.[172]

Other sources include fortified food and dietary supplements, which come in various forms. A 1998 review concluded that zinc oxide, one of the most common supplements in the United States, and zinc carbonate are nearly insoluble and poorly absorbed in the body.[173] This review cited studies which found low plasma zinc concentrations after zinc oxide and zinc carbonate were consumed compared with those seen after consumption of zinc acetate and sulfate salts.[173] However, harmful excessive supplementation is a problem among the relatively affluent, and should probably not exceed 20 mg/day in healthy people,[174] although the U.S. National Research Council set a Tolerable Upper Intake of 40 mg/day.[175]

For fortification, however, a 2003 review recommended zinc oxide in cereals as cheap, stable, and as easily absorbed as more expensive forms.[176] A 2005 study found that various compounds of zinc, including oxide and sulfate, did not show statistically significant differences in absorption when added as fortificants to maize tortillas.[177] A 1987 study found that zinc picolinate was better absorbed than zinc gluconate or zinc citrate.[178] However, a study published in 2008 determined that zinc glycinate is the best absorbed of the four dietary supplement types available.[179]

Groups at risk for zinc deficiency include the elderly, and those with renal insufficiency. The zinc chelator phytate, found in seeds and cereal bran, can contribute to zinc malabsorption [2]

Despite some concerns,[181] western vegetarians and vegans have not been found to suffer from overt zinc deficiencies any more than meat-eaters.[182] Major plant sources of zinc include cooked dried beans, sea vegetables, fortified cereals, soyfoods, nuts, peas, and seeds.[181] However, phytates in many whole-grains and fiber in many foods may interfere with zinc absorption and marginal zinc intake has poorly understood effects. There is some evidence to suggest that more than the US RDA (15 mg) of zinc daily may be needed in those whose diet is high in phytates, such as some vegetarians.[181] These considerations must be balanced against the fact that there is a paucity of adequate zinc biomarkers, and the most widely used indicator, plasma zinc, has poor sensitivity and specificity.[183] Diagnosing zinc deficiency is a persistent challenge.[1]

Nearly two billion people in the developing world are deficient in zinc.[2] In children it causes an increase in infection and diarrhea, contributing to the death of about 800,000 children worldwide per year.[1] The World Health Organization advocates zinc supplementation for severe malnutrition and diarrhea.[184] Zinc supplements help prevent disease and reduce mortality, especially among children with low birth weight or stunted growth.[184] However, zinc supplements should not be administered alone, since many in the developing world have several deficiencies, and zinc interacts with other micronutrients.[185]

Zinc deficiency is crop plants' most common micronutrient deficiency; it is particularly common in high-pH soils. Zinc-deficient soil is cultivated in the cropland of about half of Turkey and India, a third of China, and most of Western Australia, and substantial responses to zinc fertilization have been reported in these areas.[84] Plants that grow in soils that are zinc-deficient are more susceptible to disease. Zinc is primarily added to the soil through the weathering of rocks, but humans have added zinc through fossil fuel combustion, mine waste, phosphate fertilizers, limestone, manure, sewage sludge, and particles from galvanized surfaces. Excess zinc is toxic to plants, although zinc toxicity is far less widespread.[84]

Although zinc is an essential requirement for good health, excess zinc can be harmful. Excessive absorption of zinc suppresses copper and iron absorption.[167] The free zinc ion in solution is highly toxic to plants, invertebrates, and even vertebrate fish.[186] The Free Ion Activity Model is well-established in the literature, and shows that just micromolar amounts of the free ion kills some organisms. A recent example showed 6 micromolar killing 93% of all Daphnia in water.[187]

The free zinc ion is a powerful Lewis acid up to the point of being corrosive. Stomach acid contains hydrochloric acid, in which metallic zinc dissolves readily to give corrosive zinc chloride. Swallowing a post-1982 American one cent piece (97.5% zinc) can cause damage to the stomach lining due to the high solubility of the zinc ion in the acidic stomach.[188]

There is evidence of induced copper deficiency at low intakes of 100–300 mg Zn/day; a recent trial had higher hospitalizations for urinary complications compared to placebo among elderly men taking 80 mg/day.[189] The USDA RDA is 11 and 8 mg Zn/day for men and women, respectively.[168] Even lower levels, closer to the RDA, may interfere with the utilization of copper and iron or adversely affect cholesterol.[167] Levels of zinc in excess of 500 ppm in soil interfere with the ability of plants to absorb other essential metals, such as iron and manganese.[85] There is also a condition called the zinc shakes or "zinc chills" that can be induced by the inhalation of freshly formed zinc oxide formed during the welding of galvanized materials.[115]

The U.S. Food and Drug Administration (FDA) has stated that zinc damages nerve receptors in the nose, which can cause anosmia. Reports of anosmia were also observed in the 1930s when zinc preparations were used in a failed attempt to prevent polio infections.[190] On June 16, 2009, the FDA said that consumers should stop using zinc-based intranasal cold products and ordered their removal from store shelves. The FDA said the loss of smell can be life-threatening because people with impaired smell cannot detect leaking gas or smoke and cannot tell if food has spoiled before they eat it.[191] Recent research suggests that the topical antimicrobial zinc pyrithione is a potent heat shock response inducer that may impair genomic integrity with induction of PARP-dependent energy crisis in cultured human keratinocytes and melanocytes.[192]

In 1982, the United States Mint began minting pennies coated in copper but made primarily of zinc. With the new zinc pennies, there is the potential for zinc toxicosis, which can be fatal. One reported case of chronic ingestion of 425 pennies (over 1 kg of zinc) resulted in death due to gastrointestinal bacterial and fungal sepsis, while another patient, who ingested 12 grams of zinc, only showed lethargy and ataxia (gross lack of coordination of muscle movements).[193] Several other cases have been reported of humans suffering zinc intoxication by the ingestion of zinc coins.[194][195]

Pennies and other small coins are sometimes ingested by dogs, resulting in the need for medical treatment to remove the foreign body. The zinc content of some coins can cause zinc toxicity, which is commonly fatal in dogs, where it causes a severe hemolytic anemia, and also liver or kidney damage; vomiting and diarrhea are possible symptoms.[196] Zinc is highly toxic in parrots and poisoning can often be fatal.[197] The consumption of fruit juices stored in galvanized cans has resulted in mass parrot poisonings with zinc.[51]