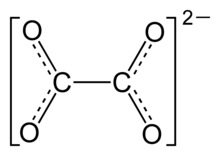 The structure of the oxalate anion 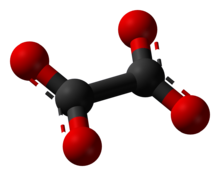 A ball-and stick model of oxalate

Oxalate (IUPAC: ethanedioate), is the dianion with formula C2O42− also written (COO)22−. Either name is often used for derivatives, such as disodium oxalate, (Na+)2C2O42−, or an ester of oxalic acid (such as dimethyl oxalate, (CH3)2C2O4. Oxalate also forms coordination compounds where it is sometimes abbreviated as ox.

Many metal ions form insoluble precipitates with oxalate, a prominent example being calcium oxalate, the primary constituent of the most common kind of kidney stones.

The dissociation of protons from oxalic acid proceeds in a stepwise manner as for other polyprotic acids. Loss of a single proton results in the monovalent hydrogenoxalate anion HC2O4−. A salt with this anion is sometimes called an acid oxalate, monobasic oxalate, or hydrogen oxalate. The equilibrium constant (Ka) for loss of the first proton is 5.37×10-2 (pKa = 1.27). The loss of the second proton, which yields the oxolate ion has a equilibrium constant of 5.25×10-5 (pKa = 4.28). These values imply that, in solutions with neutral pH, there is no oxalic acid, and only trace amounts of hydrogen oxalate.[1] The literature is often unclear on the distinction between H2C2O4, HC2O4-, and C2O42-, and the collection of species is referred to oxalic acid.

Oxalate occurs in many plants, where it is synthesized via the incomplete oxidation of carbohydrates.

The "gritty mouth" feeling one experiences when drinking milk with a rhubarb dessert is caused by precipitation of calcium, abstracted from the casein in dairy products, as calcium oxalate.[citation needed]

In the body, oxalic acid combines with divalent metallic cations such as calcium (Ca2+) and iron(II) (Fe2+) to form crystals of the corresponding oxalates which are then excreted in urine as minute crystals. These oxalates can form larger kidney stones that can obstruct the kidney tubules. An estimated 80% of kidney stones are formed from calcium oxalate.[4] Those with kidney disorders, gout, rheumatoid arthritis, or certain forms of chronic vulvar pain (vulvodynia) are typically advised to avoid foods high in oxalic acid. Methods to reduce the oxalate content in food are of current interest.[5]

Magnesium (Mg2+) oxalate is 567 times more soluble than calcium oxalate, so the latter is more likely to precipitate out when magnesium levels are low and calcium and oxalate levels are high.

Magnesium oxalate is a million times more soluble than mercury oxalate. Oxalate solubility for other metals decreases in the order Ca > Cd > Zn > {Mn,Ni,Fe,Cu} > {As,Sb,Pb} > Hg. The highly insoluble iron(II) oxalate appears to play a major role in gout, in the nucleation and growth of the otherwise extremely soluble sodium urate. This explains why gout usually appears after age 40, when ferritin levels in blood exceed 100 ng/dl. Beer is rich in oxalate and iron, and ethanol increases iron absorption and magnesium elimination, so beer intake greatly increases the risk of a gout attack.

Cadmium catalyzes the transformation of vitamin C into oxalic acid. This can be a problem for people exposed to high levels of cadmium in the diet, in the workplace, or through smoking.

In studies with rats, calcium supplements given along with foods high in oxalic acid can cause calcium oxalate to precipitate out in the gut and reduce the levels of oxalate absorbed by the body (by 97% in some cases.)[6][7]

Powdered oxalate is used as a pesticide in beekeeping to combat the bee mite.

Some fungi of the genus Aspergillus produce oxalic acid, which reacts with calcium from the blood or tissue to precipitate calcium oxalate.[9]

There is some preliminary evidence that the administration of probiotics can affect oxalic acid excretion rates[10] (and presumably oxalic acid levels as well.)

Oxalate, the conjugate base of oxalic acid, is an excellent ligand for metal ions. It usually binds as a bidentate ligand forming a 5-membered MO2C2 ring. An illustrative complex is potassium ferrioxalate, K3[Fe(C2O4)3]. The drug Oxaliplatin exhibits improved water solubility relative to older platinum-based drugs, avoiding the dose-limiting side-effect of nephrotoxicity. Oxalic acid and oxalates can be oxidized by permanganate in an autocatalytic reaction. One of the main applications of oxalic acid is a rust-removal, which arises because oxalate forms water soluble derivatives with the ferric ion.

Although unusual, consumption of oxalates (for example, the grazing of animals on oxalate-containing plants such as greasewood or human consumption of Sorrel) may result in kidney disease or even death due to oxalate poisoning. The presence of Oxalobacter formigenes in the gut flora can prevent this. Cadmium catalyzes the transformation of vitamin C into oxalic acid and can result from smoking heavily, ingesting produce tainted with Cd or from industrial exposure to Cd.