Figure 1. The location of the four potential glycosylation sites within the tertiary structure of an antithrombin monomer are shown, as taken from the protein data bank file 2ANT. In this structure only Asn 155 is glycosylated by the addition of a single N-acetylglucosamine residue.

Antithrombin has a half-life in blood plasma of around 3 days.[4] The normal antithrombin concentration in human blood plasma is high at approximately 0.12 mg/ml, which is equivalent to a molar concentration of 2.3 μM.[5] Antithrombin has been isolated from the plasma of a large number of species additional to humans.[6] As deduced from protein and cDNA sequencing, cow, sheep, rabbit and mouse antithrombins are all 433 amino acids in length, which is one amino acid longer than human antithrombin. The extra amino acid is thought to occur at amino acid position 6. Cow, sheep, rabbit, mouse, and human antithrombins share between 84 and 89% amino acid sequence identity.[7] Six of the amino acids form three intramolecular disulfide bonds, Cys8-Cys128, Cys21-Cys95, and Cys248-Cys430. They all have four potential N-glycosylation sites. These occur at asparagine (Asn) amino acid numbers 96, 135, 155, and 192 in humans and at similar amino acid numbers in other species. All these sites are occupied by covalently attached oligosaccharide side-chains in the predominant form of human antithrombin, α-antithrombin, resulting in a molecular weight for this form of antithrombin of 58,200.[1] The potential glycosylation site at asparagine 135 is not occupied in a minor form (around 10%) of antithrombin, β-antithrombin (see Figure 1).[8]

Antithrombin begins in its native state, which has a higher free energy compared to the latent state, which it decays to on average after 3 days. The latent state has the same form as the activated state - that is, when it is inhibiting thrombin. As such it is a classic example of the utility of kinetic vs thermodynamic control of protein folding. 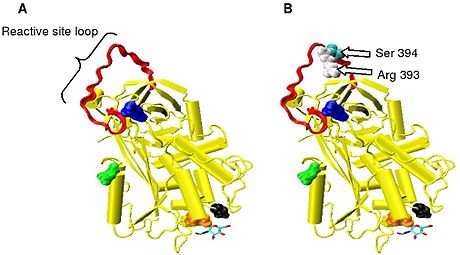 Figure 2. The reactive arg 393 - ser 394 bond is located on an exposed loop at the surface of the molecule. This loop is termed the reactive site loop (RSL) or reactive centre loop (RCL).

The physiological target proteases of antithrombin are those of the contact activation pathway (formerly known as the intrinsic pathway), namely the activated forms of Factor X (Xa), Factor IX (IXa), Factor XI (XIa), Factor XII (XIIa) and, to a greater extent, Factor II (thrombin) (IIa), and also the activated form of Factor VII (VIIa) from the tissue factor pathway (formerly known as the extrinsic pathway).[15] The inhibitor also inactivates kallikrein and plasmin, also involved in blood coagulation. However it inactivates certain other serine proteases that are not involved in coagulation such as trypsin and the C1s subunit of the enzyme C1 involved in the classical complement pathway.[7][16]

Protease inactivation results as a consequence of trapping the protease in an equimolar complex with antithrombin in which the active site of the protease enzyme is inaccessible to its usual substrate.[7] The formation of an antithrombin-protease complex involves an interaction between the protease and a specific reactive peptide bond within antithrombin. In human antithrombin this bond is between arginine (arg) 393 and serine (ser) 394 (see Figure 2 and Figure 3).[7]

The rate of antithrombin's inhibition of protease activity is greatly enhanced by its additional binding to heparin as is its inactivation by neutrophil elastase.[18]

Upon binding to this pentasaccharide sequence, inhibition of protease activity is increased by heparin as a result of two distinct mechanisms.[24] In one mechanism heparin stimulation of Factor IXa and Xa inhibition depends on a conformational change within antithrombin involving the reactive site loop and is thus allosteric.[25] In another mechanism stimulation of thrombin inhibition depends on the formation of a ternary complex between AT-III, thrombin, and heparin.[25] 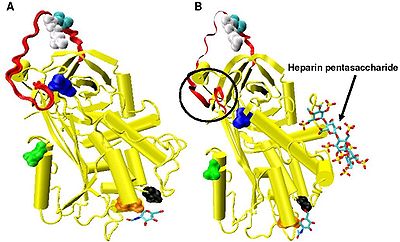 Figure 4. Two crystal structures for antithrombin. Model A is taken from the pdb file 2ANT and model B from pdb file 1AZX. Model B is complexed with a pentasaccharide while model A is uncomplexed.

In the absence of heparin, amino acids P14 and P15 (see Figure 3) from the reactive site loop are embedded within the main body of the protein (specifically the top of beta sheet A). This feature is in common with other serpins such as heparin cofactor II, alpha 1-antichymotrypsin and MENT. Figure 5. The structure of an antithrombin-thrombin-heparin ternary complex taken from pdb 1TB6.

Increased thrombin inhibition requires the minimal heparin pentasaccharide plus at least an additional 13 monomeric units.[28] This is thought to be due to a requirement that antithrombin and thrombin must bind to the same heparin chain adjacent to each other. This can be seen in the series of models shown in Figure 5.

In the structures shown in Figure 5 the C-terminal portion (P' side) of the reactive site loop is in an extended conformation when compared with other un-activated or heparin activated antithrombin structures.[29] The P' region of antithrombin is unusually long relative to the P' region of other serpins and in un-activated or heparin activated antithrombin structures forms a tightly hydrogen bonded β-turn. P' elongation occurs through the breaking of all hydrogen bonds involved in the β-turn.[29]

The hinge region of antithrombin in the Figure 5 complex could not be modelled due to its conformational flexibility, and amino acids P9-P14 are not seen in this structure. This conformational flexibility indicates an equilibrium may exist within the complex between a P14 P15 reactive site loop inserted antithrombin conformation and a P14 P15 reactive site loop expelled conformation. In support of this, analysis of the positioning of P15 Gly in the Figure 5 complex (labelled in model B) shows it to be inserted into beta sheet A (see model C).[29]

Effect of glycosylation on activity

α-Antithrombin and β-antithrombin differ in their affinity for heparin.[30] The difference in dissociation constant between the two is threefold for the pentasaccharide shown in Figure 3 and greater than tenfold for full length heparin, with β-antithrombin having a higher affinity.[31] The higher affinity of β-antithrombin is thought to be due to the increased rate at which subsequent conformational changes occur within the protein upon initial heparin binding. For α-antithrombin, the additional glycosylation at Asn-135 is not thought to interfere with initial heparin binding, but rather to inhibit any resulting conformational changes.[30]

Even though it is present at only 5–10% the levels of α-antithrombin, due to its increased heparin affinity, it is thought that β-antithrombin is more important than α-antithrombin in controlling thrombogenic events resulting from tissue injury. Indeed, thrombin inhibition after injury to the aorta has been attributed solely to β-antithrombin.[32]

For more details on this topic, see Antithrombin III deficiency.

Evidence for the important role antithrombin plays in regulating normal blood coagulation is demonstrated by the correlation between inherited or acquired antithrombin deficiencies and an increased risk of any affected individual developing thrombotic disease.[33] Antithrombin deficiency generally comes to light when a patient suffers recurrent venous thrombosis and pulmonary embolism.

Acquired antithrombin deficiency may result from a range of disorders such as liver dysfunction (coagulopathy), sepsis, premature birth, kidney disease with protein loss in the urine in patients with nephrotic syndrome, or as a result of interventions such as major surgery or cardiopulmonary bypass.[34]

Type I antithrombin deficiency is characterised by a decrease in both antithrombin activity and antithrombin concentration in the blood of affected individuals. Type I deficiency was originally further divided into two subgroups, Ia and Ib, based upon heparin affinity. The antithrombin of subgroup Ia individuals showed a normal affinity for heparin while the antithrombin of subgroup Ib individuals showed a reduced affinity for heparin.[40] Subsequent functional analysis of a group of 1b cases found them not only to have reduced heparin affinity but multiple or 'pleiotrophic' abnormalities affecting the reactive site, the heparin binding site and antithrombin blood concentration. In a revised system of classification adopted by the Scientific and Standardization Committee of the International Society on Thrombosis and Haemostasis, type Ib cases are now designated as type II PE, Pleiotrophic effect.[41]

Type II antithrombin deficiency is characterised by normal antithrombin levels but reduced antithrombin activity in the blood of affected individuals. Originally it was proposed that type II deficiency be further divided into three subgroups IIa, IIb and IIc depending upon which antithrombin functional activity is reduced or retained.[40]

Presently it is relatively easy to characterise a specific antithrombin genetic mutation. However prior to the use of modern characterisation techniques investigators named mutations for the town or city were the individual suffering from the deficiency resided i.e. the antithrombin mutation was designated a toponym.[45] Modern mutational characterisation has since shown that many individual antithrombin toponyms are actually the result of the same genetic mutation, for example Antithrombin-Toyama, is equivalent to Antihrombin-Kumamoto, -Amien, -Tours, -Paris-1, -Paris-2, -Alger, -Padua-2 and -Barcelona.[44]

Antithrombin may be given exogenously as a medication for thrombotic disorders.

It can made from the milk of goats that have been genetically modified to produce it, such as the recently FDA-approved ATryn. 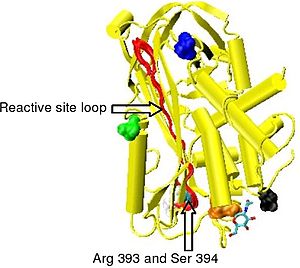 Angiogenesis is a physiological process involving the growth of new blood vessels from pre-existing vessels. Under normal physiological conditions angiogenesis is tightly regulated and is controlled by a balance of angiogenic stimulators and angiogenic inhibitors. Tumor growth is dependent upon angiogenesis and during tumor development a sustained production of angiogenic stimulatory factors is required along with a reduction in the quantity of angiogenic inhibitory factors tumor cells produce.[52] The cleaved and latent form of antithrombin potently inhibit angiogenesis and tumor growth in animal models.[53] The prelatent form of antithrombin has been shown to inhibit angiogenesis in-vitro but to date has not been tested in experimental animal models.