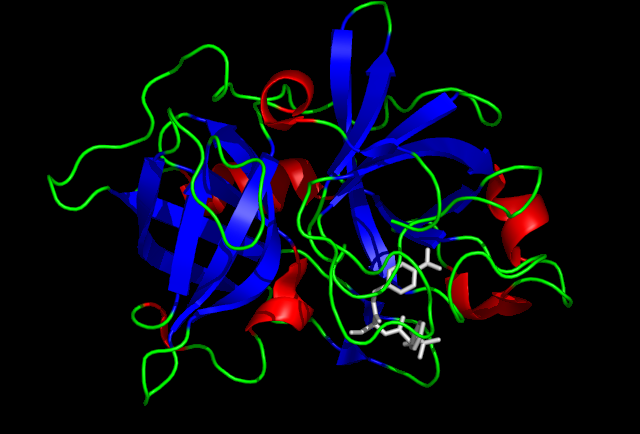 Urokinase (Abbokinase), also called urokinase-type Plasminogen Activator (uPA), is a (EC number|3.4.21.73). Urokinase was originally isolated from human , but is present in several physiological locations, such as blood stream and the . The primary physiological substrate is , which is an inactive form of the serine protease . Activation of plasmin triggers a proteolysis cascade which, depending on the physiological environment participate in or degradation. This links urokinase to vascular diseases and cancer.

Urokinase is a 411 residue , consisting of three domains: the serine protease domain, the and the . Urokinase is synthesized as a zymogen form (prourokinase or single chain urokinase), and is activated by proteolytic cleavage between L158 and I159. The two resulting chains are kept together by a bond.

The most important inhibitors of urokinase are the s (PAI-1) and (PAI-2), which inhibits the protease activity irreversibly. In the extracellular matrix urokinase is tethered to the by its interaction to the .

Elevated expression levels of urokinase and several other components of the are found to be correlated with . It is believed that the tissue degradation following plasminogen activation, facilitates tissue invasion and thus contributes to . This makes urokinase an attractive and inhibitors have been sought to be used as anticancer agents. However incompatibilities between the human and system hampers clinical evaluation of these agents. Through its interaction with the , urokinase affects several other aspects of cancer biology such as cells adhesion, migration and cellular pathways.

Urokinase is used clinically as a thrombolytic agent in the treatment of severe or massive , , , and occluded or cannulas. It is also administered intrapleurally to improve the drainage of complicated pleural effusions and empyemas. Recently, Alteplase has replaced urokinase as a thrombolytic drug in infarctation.