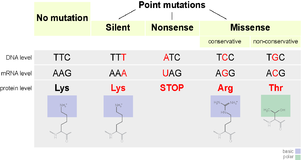 Transition mutations are about an order of magnitude more common than transversions. Point mutations can also be categorized functionally:

For example, sickle-cell disease is caused by a single point mutation (a missense mutation) in the beta-hemoglobin gene that converts a GAG codon into GUG, which encodes the amino acid valine rather than glutamic acid. This is an example of a non-conservative (missense) mutation.

Point mutations that occur in non-coding sequences are most often without consequences, although there are exceptions. If the mutated base pair is in the promoter sequence of a gene, then the expression of the gene may change. Also, if the mutation occurs in the splicing site of an intron, then this may interfere with correct splicing of the transcribed pre-mRNA.

Sometimes the term point mutation is also used to describe insertions or deletions of a single base pair (which has more of an adverse effect on the synthesized protein due to the nucleotides' still being read in triplets, but in different frames: a mutation called a frameshift mutation).

A "point mutant" is an individual which is affected by a point mutation.

Point mutations may arise from spontaneous mutations that occur during DNA replication. The rate of mutation may be increased by mutagens. Mutagens can be physical, such as radiation from UV rays, X-rays or extreme heat, or chemical (molecules that misplace base pairs or disrupt the helical shape of DNA). Mutagens associated with cancers are often studied to learn about cancer and its prevention. 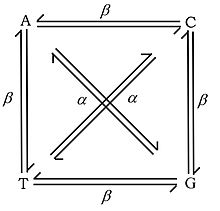 There is a systematic difference in rates for transitions (Alpha) and transversions (Beta).