Nucleotides are molecules that, when joined together, make up the structural units of RNA and DNA. In addition, nucleotides participate in cellular signaling (cGMP and cAMP), and are incorporated into important cofactors of enzymatic reactions (coenzyme A, FAD, FMN, and NADP+). Nucleotide derivatives such as the nucleoside triphosphates play central roles in metabolism, in which capacity they serve as sources of chemical energy (ATP and GTP).[1]

Structural elements of the most common nucleotides 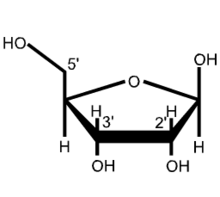 Nucleic acids are polymeric macromolecules made from nucleotide monomers. In DNA, the purine bases are adenine and guanine, while the pyrimidines are thymine and cytosine. RNA uses uracil in place of thymine. Adenine always pairs with thymine by 2 hydrogen bonds, while guanine pairs with cytosine through 3 hydrogen bonds, each due to their unique structures.

Nucleotides can be synthesized by a variety of means both in vitro and in vivo.

In vivo, nucleotides can be synthesized de novo or recycled through salvage pathways.[3] The components used in de novo nucleotide synthesis are derived from biosynthetic precursors of carbohydrate and amino acid metabolism, and from ammonia and carbon dioxide. The liver is the major organ of de novo synthesis of all four nucleotides. De novo synthesis of pyrimidines and purines follows two different pathways. Pyrimidines are synthesized first from aspartate and carbamoyl-phosphate in the cytoplasm to the common precursor ring structure orotic acid, onto which a phosphorylated ribosyl unit is covalently linked. Purines, however, are first synthesized from the sugar template onto which the ring synthesis occurs. For reference, the syntheses of the purine and pyrimidine nucleotides are carried out by several enzymes in the cytoplasm of the cell, not within a specific organelle. Nucleotides undergo breakdown such that useful parts can be reused in synthesis reactions to create new nucleotides.

In vitro, protecting groups may be used during laboratory production of nucleotides. A purified nucleoside is protected to create a phosphoramidite, which can then be used to obtain analogues not found in nature and/or to synthesize an oligonucleotide. 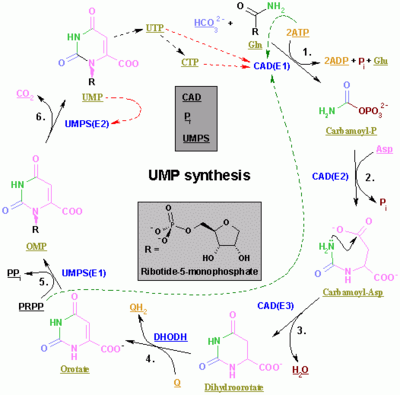 The synthesis of the pyrimidines CTP and UTP occurs in the cytoplasm and starts with the formation of carbamoyl phosphate from glutamine and CO2. Next, aspartate undergoes a condensation reaction with carbamoyl-phosphate to form orotic acid. In a subsequent cyclization reaction, the enzyme Aspartate carbamoyltransferase forms N-carbamoyl-aspartate which is converted into dihydroorotic acid by Dihydroorotase. The latter is converted to orotate by Dihydroorotate oxidase. The net reaction is:

Orotate is covalently linked with a phosphorylated ribosyl unit. The covalent linkage between the ribose and pyrimidine occurs at position C1 of the ribose unit, which contains a pyrophosphate, and N1 of the pyrimidine ring. Orotate phosphoribosyltransferase (aka "PRPP transferase") catalyzes the net reaction yielding orotidine monophosphate (OMP):

Orotidine-5-phosphate is decarboxylated by Orotidine-5'-phosphate decarboxylase to form uridine monophosphate (UMP). PRPP transferase catalyzes both the ribosylation and decarboxylation reactions, forming UMP from orotic acid in the presence of PRPP. It is from UMP that other pyrimidine nucleotides are derived. UMP is phosphorylated by two kinases to uridine triphosphate (UTP) via two sequential reactions with ATP. First the diphosphate form UDP is produced, which in turn is phosphorylated to UTP. Both steps are fueled by ATP hydrolysis:

CTP is subsequently formed by amination of UTP by the catalytic activity of CTP synthetase. Glutamine is the NH3 donor and the reaction is fueled by ATP hydrolysis, too:

The atoms which are used to build the purine nucleotides come from a variety of sources: 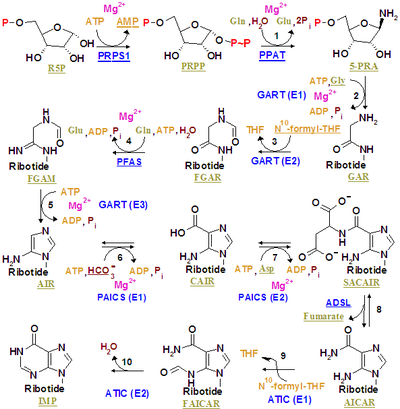 The de novo synthesis of purine nucleotides by which these precursors are incorporated into the purine ring proceeds by a 10-step pathway to the branch-point intermediate IMP, the nucleotide of the base hypoxanthine. AMP and GMP are subsequently synthesized from this intermediate via separate, two-step pathways. Thus, purine moieties are initially formed as part of the ribonucleotides rather than as free bases.

Six enzymes take part in IMP synthesis. Three of them are multifunctional:

The pathway starts with the formation of PRPP. PRPS1 is the enzyme that activates R5P, which is formed primarily by the pentose phosphate pathway, to PRPP by reacting it with ATP. The reaction is unusual in that a pyrophosphoryl group is directly transferred from ATP to C1 of R5P and that the product has the α configuration about C1. This reaction is also shared with the pathways for the synthesis of Trp, His, and the pyrimidine nucleotides. Being on a major metabolic crossroad and requiring much energy, this reaction is highly regulated.

In the first reaction unique to purine nucleotide biosynthesis, PPAT catalyzes the displacement of PRPP's pyrophosphate group (PPi) by an amide nitrogen donated from either glutamine (N), glycine (N&C), aspartate (N), folic acid (C1), or CO2. This is the committed step in purine synthesis. The reaction occurs with the inversion of configuration about 5-phosphorybosylamine (5-PRA) and establishing the anomeric form of the future nucleotide.

Next, a glycine is incorporated fueled by ATP hydrolysis and the carboxyl group forms an amine bond to the NH2 previously introduced. A one-carbon unit from folic acid coenzyme N10-formyl-THF is then added to the amino group of the substituted glycine followed by the closure of the imidazole ring. Next, a second NH2 group is transferred from a glutamine to the first carbon of the glycine unit. A carboxylation of the second carbon of the glycin unit is concomittantly added. This new carbon is modified by the additional of a third NH2 unit, this time transferred from an aspartate residue. Finally, a second one-carbon unit from formyl-THF is added to the nitrogen group and the ring covalently closed to form the common purine precursor inosine monophosphate (IMP).

In humans, pyrimidine rings (C, T, U) can be degraded completely to CO2 and NH3 (urea excretion). That having been said, purine rings (G, A) cannot. Instead they are degraded to the metabolically inert uric acid which is then excreted from the body. Uric acid is formed when GMP is split into the base guanine and ribose. Guanine is deaminated to xanthine which in turn is oxidized to uric acid. This last reaction is irreversible. Similarly, uric acid can be formed when AMP is deaminated to IMP from which the ribose unit is removed to form hypoxanthine. Hypoxanthine is oxidized to xanthine and finally to uric acid. Instead of uric acid secretion, guanine and IMP can be used for recycling purposes and nucleic acid synthesis in the presence of PRPP and aspartate (NH3 donor).

The IUPAC has designated the symbols for nucleotides.[6] Apart from the five (A, G, C, T/U) bases, often degenerate bases are used especially for designing PCR primers. These nucleotide codes are listed here.