A protecting group or protective group is introduced into a molecule by chemical modification of a functional group in order to obtain chemoselectivity in a subsequent chemical reaction. It plays an important role in multistep organic synthesis. 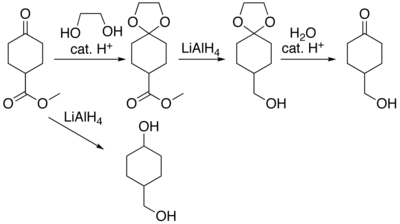 Acetal protection of a ketone during reduction of an ester, vs. reduction to a dialcohol when unprotected.

In many preparations of delicate organic compounds, some specific parts of their molecules cannot survive the required reagents or chemical environments. Then, these parts, or groups, must be protected. For example, lithium aluminium hydride is a highly reactive but useful reagent capable of reducing esters to alcohols. It will always react with carbonyl groups, and this cannot be discouraged by any means. When a reduction of an ester is required in the presence of a carbonyl, the attack of the hydride on the carbonyl has to be prevented. For example, the carbonyl is converted into an acetal, which does not react with hydrides. The acetal is then called a protecting group for the carbonyl. After the step involving the hydride is complete, the acetal is removed (by reacting it with an aqueous acid), giving back the original carbonyl. This step is called deprotection.

Protecting groups are more commonly used in small-scale laboratory work and initial development than in industrial production processes because their use adds additional steps and material costs to the process. However, the availability of a cheap chiral building block can overcome these additional costs (e.g. shikimic acid for oseltamivir).

Orthogonal protection is a strategy allowing the deprotection of multiple protective groups one at a time each with a dedicated set of reaction conditions without affecting the other. It was introduced in the field of peptide synthesis by Robert Bruce Merrifield in 1977.[4] As a proof of concept orthogonal deprotection is demonstrated in a photochemical transesterification by trimethylsilyldiazomethane utilizing the kinetic isotope effect [5]: 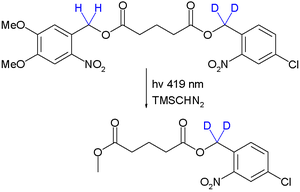 Due to this effect the quantum yield for deprotection of the right-side ester group is reduced and it stays intact. Significantly by placing the deuterium atoms next to the left-side ester group or by changing the wavelength to 254 nm the other monoarene is obtained.

In a 2007 paper [6] Phil Baran notes that even though the textbooks state that the use of protective groups is unavoidable and that they are ideally easily added and removed, in practical terms in organic synthesis their use adds two synthetic steps (protection-deprotection sequence) to a chemical sequence and sometimes dramatically lowers chemical yield. Crucially, added complexity impedes the use of synthetic total synthesis in drug discovery. In contrast biomimetic synthesis does not employ protective groups. As an alternative, Baran presented a novel protective-group free synthesis of the compound hapalindole U. The previously published synthesis [7][8][9] according to Baran, contained 20 steps with multiple protective group manipulations (two confirmed):