Acetylene (systematic name: ethyne) is the chemical compound with the formula C2H2. It is a hydrocarbon and the simplest alkyne. This colorless gas is widely used as a fuel and a chemical building block. It is unstable in pure form and thus is usually handled as a solution.

As an alkyne, acetylene is unsaturated because its two carbon atoms are bonded together in a triple bond. The carbon-carbon triple bond places all four atoms in the same straight line, with CCH bond angles of 180°. Since acetylene is a linear symmetrical molecule, it possesses the D∞h point group.[2]

Acetylene was discovered in 1836 by Edmund Davy who identified it as a "new carburet of hydrogen". It was rediscovered in 1860 by French chemist Marcellin Berthelot, who coined the name "acetylene". Berthelot was able to prepare this gas by passing vapours of organic compounds (methanol, ethanol, etc.) through a red-hot tube and collecting the effluent. He also found acetylene was formed by sparking electricity through mixed cyanogen and hydrogen gases. Berthelot later obtained acetylene directly by passing hydrogen between the poles of a carbon arc.[3]

Today acetylene is mainly manufactured by the partial combustion of methane or appears as a side product in the ethylene stream from cracking of hydrocarbons. Approximately 400,000 tonnes are produced this way annually.[4] Its presence in ethylene is usually undesirable because of its explosive character and its ability to poison Ziegler-Natta catalysts. It is selectively hydrogenated into ethylene, usually using Pd-Ag catalysts.[5]

Until the 1950s, when oil supplanted coal as the chief source of carbon, acetylene (and the aromatic fraction from coal tar) was the main source of organic chemicals in the chemical industry. It was prepared by the hydrolysis of calcium carbide, a reaction discovered by Friedrich Wöhler in 1862 and still familiar to students:

Calcium carbide production requires extremely high temperatures, ~2000 °C, necessitating the use of an electric arc furnace. In the US, this process was an important part of the late-19th century revolution in chemistry enabled by the massive hydroelectric power project at Niagara Falls.

In terms of valence bond theory, in each carbon atom the 2s orbital hybridizes with one 2p orbital thus forming an sp hybrid. The other two 2p orbitals remain unhybridized. The two ends of the two sp hybrid orbital overlap to form a strong σ valence bond between the carbons, while on each of the other two ends hydrogen atoms attach also by σ bonds. The two unchanged 2p orbitals form a pair of weaker π valence bonds.[6]

Compared to most hydrocarbons, acetylene is relatively acidic, though it is still much less acidic than water or ethanol. Thus it reacts with strong bases to form acetylide salts. For example, acetylene reacts with sodium amide in liquid ammonia to form sodium acetylide, and with butyllithium in cold THF to give lithium acetylide.[7]

Walter Reppe discovered that in the presence of metal catalysts, acetylene can react to give a wide range of industrially significant chemicals. 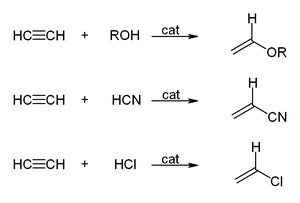 1,4-Butynediol is produced industrially in this way from formaldehyde and acetylene.

Approximately 20 percent of acetylene is consumed for oxyacetylene gas welding and cutting due to the high temperature of the flame; combustion of acetylene with oxygen produces a flame of over 3600 K (3300 °C, 6000 °F), releasing 11.8 kJ/g. Oxyacetylene is the hottest burning common fuel gas.[8] Acetylene is the third hottest natural chemical flame after cyanogen at 4798 K (4525 °C, 8180 °F) and dicyanoacetylene's 5260 K (4990 °C, 9010 °F). Oxy-acetylene welding was a very popular welding process in previous decades; however, the development and advantages of arc-based welding processes have made oxy-fuel welding nearly extinct for many applications. Acetylene usage for welding has dropped significantly. On the other hand, oxy-acetylene welding equipment is quite versatile – not only because the torch is preferred for some sorts of iron or steel welding (as in certain artistic applications), but also because it lends itself easily to brazing, braze-welding, metal heating (for annealing or tempering, bending or forming), the loosening of corroded nuts and bolts, and other applications. Bell Canada cable repair technicians still use portable acetylene fueled torch kits as a soldering tool for sealing lead sleeve splices in manholes and in some aerial locations. Oxyacetylene welding may also be used in areas where electricity is not readily accessible. As well, oxy-fuel cutting is still very popular and oxy-acetylene cutting is utilized in nearly every metal fabrication shop. For use in welding and cutting, the working pressures must be controlled by a regulator, since above 15 psi[9] acetylene will decompose explosively. 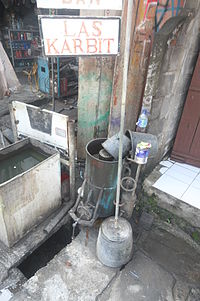 Acetylene fuel container/burner as used in the island of Bali

In 1881, the Russian chemist Mikhail Kucherov[10] described the hydration of acetylene to acetaldehyde using catalysts such as mercury(II) bromide. Before the advent of the Wacker process, this reaction was conducted on an industrial scale.[11]

The polymerization of acetylene with Ziegler-Natta catalysts produces polyacetylene films. Polyacetylene, a chain of CH centres with alternating single and double bonds, was the one of first discovered organic semiconductors. Its reaction with iodine produces a highly electrically conducting material. Although such materials are not useful, these discoveries led to the developments of organic semiconductors, as recognized by the Nobel Prize in Chemistry in 2000 to Alan J. Heeger, Alan G MacDiarmid, and Hideki Shirakawa.

In the early 20th Century acetylene was widely used for illumination, including street lighting in some towns.[12] Most early automobiles used carbide lamps before the adoption of electric headlights.

Acetylene is sometimes used for carburization (that is, hardening) of steel when the object is too large to fit into a furnace.[8]

Acetylene is used to volatilize carbon in radiocarbon dating. The carbonaceous material in an archeological sample is reacted with lithium metal in a small specialized research furnace to form lithium carbide (also known as lithium acetylide). The carbide can then be reacted with water, as usual, to form acetylene gas to be fed into mass spectrometer to sort out the isotopic ratio of carbon 14 to carbon 12.

Acetylene is a moderately common chemical in the universe, often associated with the atmospheres of gas giants.[13] One curious discovery of acetylene is on Enceladus, a moon of Saturn. Natural acetylene is believed to form from either catalytic decomposition of long chain hydrocarbons at temperatures of 1,770 K and above. Since such temperatures are highly unlikely on such a small distant body, this discovery is potentially suggestive of catalytic reactions within that moon, making it a promising site to search for prebiotic chemistry.[14][15]

Acetylene is not especially toxic but when generated from calcium carbide it can contain toxic impurities such as traces of phosphine and arsine. It is also highly flammable (hence its use in welding). Its singular hazard is associated with its intrinsic instability, especially when it is pressurized. Samples of concentrated or pure acetylene can easily react in an addition-type reaction to form a number of products, typically benzene and/or vinylacetylene. This reaction is exothermic. Consequently, acetylene can explode with extreme violence if the pressure of the gas exceeds about 200 kPa (29 psi) as a gas[16] or when in liquid or solid form. It is therefore shipped and stored dissolved in acetone or dimethylformamide (DMF), contained in a metal cylinder with a porous filling (Agamassan), which renders it safe to transport and use, given proper handling.