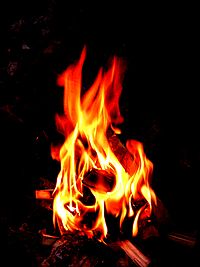 Combustion (English pronunciation: /kəmˈbʌs.tʃən /) or burning is the sequence of exothermic chemical reactions between a fuel and an oxidant accompanied by the production of heat and conversion of chemical species. The release of heat can result in the production of light in the form of either glowing or a flame. Fuels of interest often include organic compounds (especially hydrocarbons) in the gas, liquid or solid phase.

In a complete combustion reaction, a compound reacts with an oxidizing element, such as oxygen or fluorine, and the products are compounds of each element in the fuel with the oxidizing element. For example:

A simple example can be seen in the combustion of hydrogen and oxygen, which is a commonly used reaction in rocket engines:

The result is water vapor.

Complete combustion is almost impossible to achieve. In reality, as actual combustion reactions come to equilibrium, a wide variety of major and minor species will be present such as carbon monoxide and pure carbon (soot or ash). Additionally, any combustion in atmospheric air, which is 78% nitrogen, will also create several forms of nitrogen oxides.

Combustion is not necessarily favorable to the maximum degree of oxidation and it can be temperature-dependent. For example, sulfur trioxide is not produced quantitatively in combustion of sulfur. Nitrogen oxides start to form above 2,800 °F (1,540 °C) and more nitrogen oxides are produced at higher temperatures. Below this temperature, molecular nitrogen (N2) is favored. It is also a function of oxygen excess.[1]

In most industrial applications and in fires, air is the source of oxygen (O2). In air, each mole of oxygen is mixed with approximately 3.76 mole of nitrogen. Nitrogen does not take part in combustion, but at high temperatures, some nitrogen will be converted to NOx, usually between 1% and 0.002% (2 ppm).[2] Furthermore, when there is any incomplete combustion, some of carbon is converted to carbon monoxide. A more complete set of equations for combustion of methane in air is therefore:

Incomplete combustion will only occur when there is not enough oxygen to allow the fuel to react completely to produce carbon dioxide and water. It also happens when the combustion is quenched by a heat sink such as a solid surface or flame trap.

For most fuels, such as diesel oil, coal or wood, pyrolysis occurs before combustion. In incomplete combustion, products of pyrolysis remain unburnt and contaminate the smoke with noxious particulate matter and gases. Partially oxidized compounds are also a concern; partial oxidation of ethanol can produce harmful acetaldehyde, and carbon can produce toxic carbon monoxide.

Smoldering is the slow, low-temperature, flameless form of combustion, sustained by the heat evolved when oxygen directly attacks the surface of a condensed-phase fuel. It is a typically incomplete combustion reaction. Solid materials that can sustain a smoldering reaction include coal, cellulose, wood, cotton, tobacco, peat, duff, humus, synthetic foams, charring polymers including polyurethane foam, and dust. Common examples of smoldering phenomena are the initiation of residential fires on upholstered furniture by weak heat sources (e.g., a cigarette, a short-circuited wire), and the persistent combustion of biomass behind the flaming front of wildfires 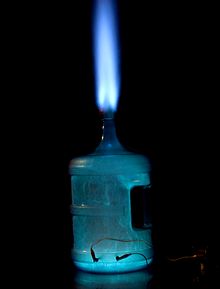 Combustion resulting in a turbulent flame is the most used for industrial application (e.g. gas turbines, gasoline engines, etc.) because the turbulence helps the mixing process between the fuel and oxidizer. 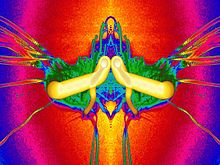 Colourized gray-scale composite image of the individual frames from a video of a backlit fuel droplet burning in microgravity.

Combustion processes behave differently in a microgravity environment than in Earth-gravity conditions due to the lack of buoyancy. For example, a candle's flame takes the shape of a sphere.[3] Microgravity combustion research contributes to understanding of spacecraft fire safety and diverse aspects of combustion physics.

Combustion processes which happen in very small volume are considered as micro combustion. Quenching distance plays a vital role in stabilizing the flame in such combustion chambers.

Generally, the chemical equation for stoichiometric burning of hydrocarbon in oxygen is

For example, the burning of propane is

Generally, the chemical equation for stoichiometric incomplete combustion of hydrocarbon in oxygen is as follows:

For example, the incomplete combustion of propane is:

The simple word equation for the combustion of a hydrocarbon in oxygen is:

If the combustion takes place using air as the oxygen source, the nitrogen can be added to the equation,as and although it does not react, to show the composition of the flue gas:

For example, the burning of propane is:

The simple word equation for this type of combustion is hydrocarbon in air:

Nitrogen may also oxidize when there is an excess of oxygen. The reaction is thermodynamically favored only at high temperatures. Diesel engines are run with an excess of oxygen to combust small particles that tend to form with only a stoichiometric amount of oxygen, necessarily producing nitrogen oxide emissions. Both the United States and European Union are planning to impose limits to nitrogen oxide emissions, which necessitate the use of a special catalytic converter or treatment of the exhaust with urea.

The act of combustion consists of three relatively distinct but overlapping phases: 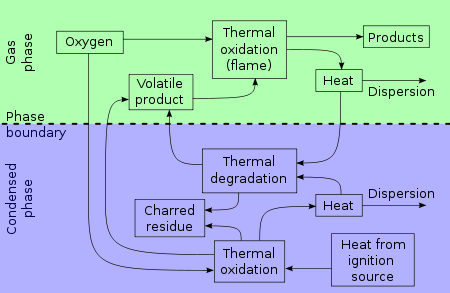 A general scheme of polymer combustion

Combustion in oxygen is a radical chain reaction where many distinct radical intermediates participate.

The high energy required for initiation is explained by the unusual structure of the dioxygen molecule. The lowest-energy configuration of the dioxygen molecule is a stable, relatively unreactive diradical in a triplet spin state. Bonding can be described with three bonding electron pairs and two antibonding electrons, whose spins are aligned, such that the molecule has nonzero total angular momentum. Most fuels, on the other hand, are in a singlet state, with paired spins and zero total angular momentum. Interaction between the two is quantum mechanically a "forbidden transition", i.e. possible with a very low probability. To initiate combustion, energy is required to force dioxygen into a spin-paired state, or singlet oxygen. This intermediate is extremely reactive. The energy is supplied as heat. The reaction produces heat, which keeps it going.

Combustion of hydrocarbons is thought to be initiated by hydrogen atom abstraction (not proton abstraction) from the fuel to oxygen, to give a hydroperoxide radical (HOO). This reacts further to give hydroperoxides, which break up to give hydroxyl radicals. There are a great variety of these processes that produce fuel radicals and oxidizing radicals. Oxidizing species include singlet oxygen, hydroxyl, monatomic oxygen, and hydroperoxyl. Such intermediates are short-lived and cannot be isolated. However, non-radical intermediates are stable and are produced in incomplete combustion. An example is acetaldehyde produced in the combustion of ethanol. An intermediate in the combustion of carbon and hydrocarbons, carbon monoxide, is of special importance because it is a poisonous gas, but also economically useful for the production of syngas.

Solid fuels also undergo a great number of pyrolysis reactions that give more easily oxidized, gaseous fuels. These reactions are endothermic and require constant energy input from the combustion reactions. A lack of oxygen or other poorly designed conditions result in these noxious and carcinogenic pyrolysis products being emitted as thick, black smoke.

In the case of fossil fuels burnt in air, the combustion temperature depends on all of the following:

The adiabatic combustion temperature (also known as the adiabatic flame temperature) increases for higher heating values and inlet air and fuel temperatures and for stoichiometric air ratios approaching one.

The Rayleigh Criterion is the basis for analysis of thermoacoustic combustion instabilities and is evaluated using the Rayleigh Index over one cycle of instability:[citation needed]

Rate of combustion is the amount of mass of a material that goes through combustion over an amount of time. It can be expressed in g/s or kg/s.