Nitrogen dioxide is the chemical compound with the formula NO2 it is one of several nitrogen oxides. NO2 is an intermediate in the industrial synthesis of nitric acid, millions of tons of which are produced each year. This reddish-brown toxic gas has a characteristic sharp, biting odor and is a prominent air pollutant. Nitrogen dioxide is a paramagnetic bent molecule with C2v point group symmetry.

Nitrogen dioxide has a molar mass of 46.0055, which makes it heavier than air, whose average molar mass is 28.8. According to the ideal gas law, NO2 is therefore more dense than air.

The bond length between the nitrogen atom and the oxygen atom is 119.7 pm. This bond length is consistent with a bond order of one and a quarter, as in ozone (O3).

The ground electronic state of nitrogen dioxide is a doublet state, since there is one unpaired bonding electron delocalised over both bonds, hence the bond order of one and a quarter.

NO2 exists in equilibrium with dinitrogen tetroxide (N2O4):

The equilibrium is characterized by ΔH = −57.23 kJ/mol, which is exothermic. Resulting from an endergonic reaction at higher temperatures, the paramagnetic monomer is favored. Colourless diamagnetic N2O4 can be obtained as a solid melting at m.p. −11.2 °C.[2]

Nitrogen dioxide typically arises via the oxidation of nitric oxide by oxygen in air:[2]

In the laboratory, NO2 can be prepared in a two step procedure by thermal decomposition of dinitrogen pentoxide, which is obtained by dehydration of nitric acid:

The thermal decomposition of some metal nitrates also affords NO2:

Alternatively, reduction of concentrated nitric acid by metal (such as copper).

The chemistry of nitrogen dioxide has been investigated extensively. At 150 °C, NO2 decomposes with release of oxygen via an endothermic process (ΔH = 114 kJ/mol):

As suggested by the weakness of the N–O bond, NO2 is a good oxidizer. Consequently, it will combust, sometimes explosively, with many compounds, such as hydrocarbons.

It hydrolyzes with disproportionation to give nitric acid:

This reaction is one step in the Ostwald process for the industrial production of nitric acid from ammonia.[3] Nitric acid decomposes slowly to nitrogen dioxide, which confers the characteristic yellow color of most samples of this acid:

NO2 is used to generate anhydrous metal nitrates from the oxides:[2]

Alkyl and metal iodides give the corresponding nitrites:

The pure gas is produced by adding concentrated nitric acid over tin. Stannic acid is produced as byproduct.

Nitrogen dioxide is toxic by inhalation. However, as the compound is acrid and easily detectable by smell at low concentrations, inhalation exposure can generally be avoided. One potential source of exposure is fuming nitric acid, which spontaneously produces NO2 above 0 °C. Symptoms of poisoning (lung edema) tend to appear several hours after inhalation of a low but potentially fatal dose. Also, low concentrations (4 ppm) will anesthetize the nose, thus creating a potential for overexposure.

The is some evidence that long-term exposure to NO2 at concentrations above 40–100 µg/m3 may decrease lung function and increase the risk of respiratory symptoms.[4]

Nitrogen dioxide is formed in most combustion processes using air as the oxidant. At elevated temperatures nitrogen combines with oxygen to form nitric oxide:

Nitric oxide can be oxidized in air to form nitrogen dioxide. At normal atmospheric concentrations this is a very slow process.

The most important sources of NO2 are internal combustion engines,[5] thermal power stations and, to a lesser extent, pulp mills. Butane gas heaters and stoves are also sources. The excess air required for complete combustion of fuels in these processes introduces nitrogen into the combustion reactions at high temperatures and produces nitrogen oxides (NOx). Limiting NOx production demands the precise control of the amount of air used in combustion. In households, kerosene heaters and gas heaters are sources of nitrogen dioxide.

Nitrogen dioxide is also produced by atmospheric nuclear tests, and is responsible for the reddish colour of mushroom clouds.[citation needed]

Nitrogen dioxide is a large scale pollutant, with rural background ground level concentrations in some areas around 30 µg/m3, not far below unhealthy levels. Nitrogen dioxide plays a role in atmospheric chemistry, including the formation of tropospheric ozone. A 2005 study by researchers at the University of California, San Diego, suggests a link between NO2 levels and Sudden Infant Death Syndrome.[6]

Nitrogen dioxide is also produced naturally during electrical storms. The term for this process is "atmospheric fixation of nitrogen". The rain produced during such storms is especially good for the garden as it contains trace amounts of fertilizer. (Henry Cavendish 1784, Birkland -Eyde Process 1903, et-al) 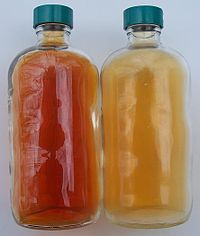 Nitrogen dioxide (NO2) gas converts to the colorless gas dinitrogen tetroxide (N2O4) at low temperatures, and converts back to NO2 at higher temperatures. The bottles in this photograph contain equal amounts of gas at different temperatures.