Nitric acid (HNO3), also known as aqua fortis and spirit of nitre, is a highly corrosive and toxic strong acid. 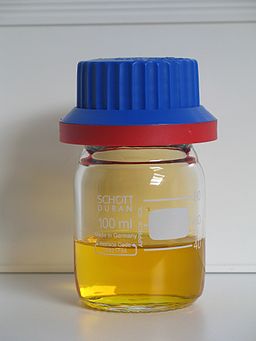 Pure anhydrous nitric acid (100%) is a colorless mobile liquid with a density of 1.512 g/cm3 which solidifies at −42 °C to form white crystals and boils at 83 °C. When boiling in light, and slowly even at room temperature, there is a partial decomposition with the formation of nitrogen dioxide following the reaction:

Nitric acid is miscible with water and distillation gives a maximum-boiling azeotrope with a concentration of 68% HNO3 and a boiling temperature of 120.5 °C at 1 atm, which is the ordinary concentrated nitric acid of commerce. Two solid hydrates are known; the monohydrate (HNO3·H2O) and the trihydrate (HNO3·3H2O).

Nitrogen oxides (NOx) are soluble in nitric acid and this property influences more or less all the physical characteristics depending on the concentration of the oxides. These mainly include the vapor pressure above the liquid and the boiling temperature, as well as the color mentioned above.

Nitric acid is subject to thermal or light decomposition with increasing concentration and this may give rise to some non-negligible variations in the vapor pressure above the liquid because the nitrogen oxides produced dissolve partly or completely in the acid.

Nitric acid is normally considered to be a strong acid at ambient temperatures. There is some disagreement over the value of the acid dissociation constant, though the pKa value is usually reported as less than –1. This means that the nitric acid in solution is fully dissociated except in extremely acidic solutions. The pKa value rises to 1 at a temperature of 250 °C.[1]

Nitric acid can act as a base with respect to an acid such as sulfuric acid.

The nitronium ion, NO2+, is the active reagent in aromatic nitration reactions. Since nitric acid has both acidic and basic properties it can undergo an autoprotolysis reaction, similar to the self-ionization of water

Nitric acid is a strong oxidizing agent as shown by its large positive reduction potential (E0r).

Being a powerful oxidizing agent, nitric acid reacts violently with many non-metallic compounds and the reactions may be explosive. Depending on the acid concentration, temperature and the reducing agent involved, the end products can be variable. Reaction takes place with all metals except the noble metals series and certain alloys. As a general rule, oxidizing reactions occur primarily with the concentrated acid, favoring the formation of nitrogen dioxide (NO2).

Nitric acid reacts with most metals. This characteristic has made it a common agent to be used in acid tests. Some precious metals, such as pure gold do not react with nitric acid, though pure gold does react with aqua regia, a mixture of concentrated nitric acid and hydrochloric acid. However, some less noble metals (Ag, Cu, ...) present in some gold alloys relatively poor in gold such as colored gold can be easily oxidized and dissolved by nitric acid, leading to colour changes of the gold-alloy surface. Nitric acid is used as a cheap means in jewelry shops to quickly spot low-gold alloys (< 14 carats) and to rapidly assess the gold purity.

Strongly electropositive metals, such as magnesium react with nitric acid as with other acids, reducing the hydrogen ion.

With less electropositive metals the products depend on temperature and the acid concentration. For example, copper reacts with dilute nitric acid at ambient temperatures with a 3:8 stoichiometry.

The nitric oxide produced may react with atmospheric oxygen to give nitrogen dioxide. With more concentrated nitric acid, nitrogen dioxide is produced directly in a reaction with 1:4 stoichiometry.

Although chromium (Cr), iron (Fe) and aluminium (Al) readily dissolve in dilute nitric acid, the concentrated acid forms a metal oxide layer that protects the metal from further oxidation, which is called passivation. Typical passivation concentrations range from 18% to 22% by weight.

Being a powerful oxidizing acid, nitric acid reacts violently with many organic materials and the reactions may be explosive.

Reaction with non-metallic elements, with the exceptions of nitrogen, oxygen, noble gases, silicon and halogens, usually oxidizes them to their highest oxidation states as acids with the formation of nitrogen dioxide for concentrated acid and nitric oxide for dilute acid.

Nitric acid reacts with proteins to form yellow nitrated products. This reaction is known as the xanthoproteic reaction. This test is carried out by adding concentrated nitric acid to the substance being tested, and then heating the mixture. If proteins are present that contains amino acids with aromatic rings, the mixture turns yellow. Upon adding a strong base such as liquid ammonia, the color turns orange. These color changes are caused by nitrated aromatic rings in the protein.[2][3] Xanthoproteic acid is formed when the acid contacts epithelial cells and is indicative of inadequate safety precautions when handling nitric acid. 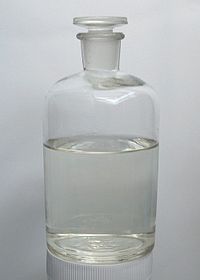 A commercial grade of fuming nitric acid, referred to in the trade as "strong nitric acid" contains 90% HNO3 and has a density of 1.50 g/mL. This grade is much used in the explosives industry. It is not as volatile nor as corrosive as the anhydrous acid and has the approximate concentration of 21.4 molar.

An inhibited fuming nitric acid (either IWFNA, or IRFNA) can be made by the addition of 0.6 to 0.7% hydrogen fluoride (HF). This fluoride is added for corrosion resistance in metal tanks. The fluoride creates a metal fluoride layer that protects the metal.

Nitric acid is made by reaction of nitrogen dioxide (NO2) with water.

Normally, the nitric oxide produced by the reaction is reoxidized by the oxygen in air to produce additional nitrogen dioxide.

Almost pure nitric acid can be made by adding sulfuric acid to a nitrate salt, and heating the mixture with an oil bath. A condenser is used to condense the nitric acid fumes that bubble out of the solution.

Dilute nitric acid may be concentrated by distillation up to 68% acid, which is a maximum boiling azeotrope containing 32% water. In the laboratory, further concentration involves distillation with either sulfuric acid or magnesium nitrate which act as dehydrating agents. Such distillations must be done with all-glass apparatus at reduced pressure, to prevent decomposition of the acid. Industrially, strong nitric acid is produced by dissolving additional nitrogen dioxide in 68% nitric acid in an absorption tower.[5] Dissolved nitrogen oxides are either stripped in the case of white fuming nitric acid, or remain in solution to form red fuming nitric acid. More recently, electrochemical means have been developed to produce anhydrous acid from concentrated nitric acid feedstock.[6]

Commercial grade nitric acid solutions are usually between 52% and 68% nitric acid. Production of nitric acid is via the Ostwald process, named after German chemist Wilhelm Ostwald. In this process, anhydrous ammonia is oxidized to nitric oxide, in the presence of platinum or rhodium gauge catalyst at a high temperature of about 500K and a pressure of 9 bar.

Nitric oxide is then reacted with oxygen in air to form nitrogen dioxide.

This is subsequently absorbed in water to form nitric acid and nitric oxide.

The nitric oxide is cycled back for reoxidation. Alternatively, if the last step is carried out in air:

The aqueous HNO3 obtained can be concentrated by distillation up to about 68% by mass. Further concentration to 98% can be achieved by dehydration with concentrated H2SO4. By using ammonia derived from the Haber process, the final product can be produced from nitrogen, hydrogen, and oxygen which are derived from air and natural gas as the sole feedstocks.[7]

Prior to the introduction of the Haber process for the production of ammonia in 1913, nitric acid was produced using the Birkeland–Eyde process, also known as the arc process. This process is based upon the oxidation of atmospheric nitrogen by atmospheric oxygen to nitric oxide at very high temperatures. An electric arc was used to provide the high temperatures, and yields of up to 4% nitric oxide were obtained. The nitric oxide was cooled and oxidized by the remaining atmospheric oxygen to nitrogen dioxide, and this was subsequently absorbed in dilute nitric acid. The process was very energy intensive and was rapidly displaced by the Ostwald process once cheap ammonia became available.

In laboratory, nitric acid can be made from copper(II) nitrate or by reaction of approximately equal masses of a nitrate salt with 96% sulfuric acid (H2SO4), and distilling this mixture at nitric acid's boiling point of 83 °C until only a white crystalline mass, a metal sulfate, remains in the reaction vessel. The red fuming nitric acid obtained may be converted to the white nitric acid.

The dissolved NOx are readily removed using reduced pressure at room temperature (10-30 min at 200 mmHg or 27 kPa) to give white fuming nitric acid. This procedure can also be performed under reduced pressure and temperature in one step in order to produce less nitrogen dioxide gas.[citation needed] 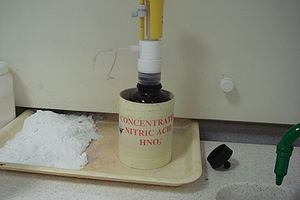 Nitric acid in a laboratory.

The main use of nitric acid is for the production of fertilizers; other important uses include the production of explosives, etching and dissolution of metals, especially as a component of aqua regia for the purification and extraction of gold, and in chemical synthesis.

In elemental analysis by ICP-MS, ICP-AES, GFAA, and Flame AA, dilute nitric acid (0.5 to 5.0 %) is used as a matrix compound for determining metal traces in solutions.[10] Ultrapure trace metal grade acid is required for such determination, because small amounts of metal ions could affect the result of the analysis.

It is also typically used in the digestion process of turbid water samples, sludge samples, solid samples as well as other types of unique samples which require elemental analysis via ICP-MS, ICP-OES, ICP-AES, GFAA and FAA. Typically these digestions use a 50% solution of the purchased HNO3 mixed with Type 1 DI Water.[11]

In organic synthesis, nitric acid may be used to introduce the nitro group. When used with sulfuric acid, it generates the nitronium ion, which electrophilically reacts with aromatic compounds such as benzene.

In electrochemistry, nitric acid is used as a chemical doping agent for organic semiconductors, and in purification processes for raw carbon nanotubes.

In a low concentration (approximately 10%), nitric acid is often used to artificially age pine and maple. The color produced is a grey-gold very much like very old wax or oil finished wood (wood finishing).[12]

A solution of nitric acid and alcohol, Nital, is used for etching of metals to reveal the microstructure. ISO 14104 is one of the standards detailing this well known procedure.

Commercially available aqueous blends of 5-30% nitric acid and 15-40% phosphoric acid are commonly used for cleaning food and dairy equipment primarily to remove precipitated calcium and magnesium compounds (either deposited from the process stream or resulting from the use of hard water during production and cleaning). The phosphoric acid content helps to passivate ferrous alloys against corrosion by the dilute nitric acid.[citation needed]

The first mention of nitric acid is in Pseudo-Geber´s De Inventione Veritatis, wherein it is obtained by calcining a mixture of niter, alum and blue vitriol. It was again described by Albert the Great in the 13th century and by Ramon Lull, who prepared it by heating niter and clay and called it "eau forte" (aqua fortis).[14]

Glauber devised the process still used today to obtain it, namely by heating niter with strong sulfuric acid. In 1776 Lavoisier showed that it contained oxygen, and in 1785 Henry Cavendish determined its precise composition and showed that it could be synthesized by passing a stream of electric sparks through moist air.[14]