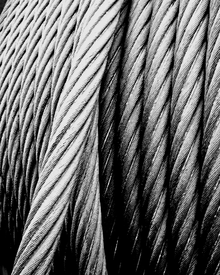 Steel is a metal alloy whose major component is iron, with carbon content between 0.02% and 2.14% by mass.

An alloy is a mixture or metallic solid solution composed of two or more elements.[1] Complete solid solution alloys give single solid phase microstructure, while partial solutions give two or more phases that may or may not be homogeneous in distribution, depending on thermal (heat treatment) history. Alloys usually have different properties from those of the component elements.

Alloy constituents are usually measured by mass. Alloys are usually classified as substitutional or interstitial alloys, depending on the atomic arrangement that forms the alloy. They can be further classified as homogeneous, consisting of a single phase, heterogeneous, consisting of two or more phases, or intermetallic, where there is no distinct boundary between phases.

Alloying a metal is done by combining it with one or more other metals or non-metals that often enhance its properties. For example, steel is stronger than iron, its primary element. The physical properties, such as density, reactivity, Young's modulus, and electrical and thermal conductivity, of an alloy may not differ greatly from those of its elements, but engineering properties such as tensile strength[2] and shear strength may be substantially different from those of the constituent materials. This is sometimes a result of the sizes of the atoms in the alloy, because larger atoms exert a compressive force on neighboring atoms, and smaller atoms exert a tensile force on their neighbors, helping the alloy resist deformation. Sometimes alloys may exhibit marked differences in behavior even when small amounts of one element occur. For example, impurities in semi-conducting ferromagnetic alloys lead to different properties, as first predicted by White, Hogan, Suhl, Tian Abrie and Nakamura.[3][4] Some alloys are made by melting and mixing two or more metals. Bronze, an alloy of copper and tin, was the first alloy discovered, during the prehistoric period now known as the bronze age; it was harder than pure copper and originally used to make tools and weapons, but was later superseded by metals and alloys with better properties. In later times bronze has been used for ornaments, bells, statues, and bearings. Brass is an alloy made from copper and zinc.

Unlike pure metals, most alloys do not have a single melting point, but a melting range in which the material is a mixture of solid and liquid phases. The temperature at which melting begins is called the solidus, and the temperature when melting is just complete is called the liquidus. However, for most alloys there is a particular proportion of constituents (in rare cases two)—the eutectic mixture—which gives the alloy a unique melting point.

The term alloy is used to describe a mixture of atoms in which the primary constituent is a metal. The primary metal is called the base, the matrix, or the solvent. The secondary constituents are often called solutes. If there is a mixture of only two types of atoms, not counting impurities, such as a copper-nickel alloy, then it is called a binary alloy. If there are three types of atoms forming the mixture, such as iron, nickel and chromium, then it is called a ternary alloy. An alloy with four constituents is a quaternary alloy, while a five-part alloy is termed a quinary alloy. Because the percentage of each constituent can be varied, with any mixture the entire range of possible variations is called a system. In this respect, all of the various forms of an alloy containing only two constituents, like iron and carbon, is called a binary system, while all of the alloy combinations possible with a ternary alloy, such as alloys of iron, carbon and chromium, is called a ternary system.[5]

When a molten metal is mixed with another substance, there are two mechanisms that can cause an alloy to form, called atom exchange and the interstitial mechanism. The relative size of each atom in the mix plays a primary role in determining which mechanism will occur. When the atoms are relatively similar in size, the atom exchange method usually happens, where some of the atoms composing the metallic crystals are substituted with atoms of the other constituent. This is called a substitutional alloy. Examples of substitutional alloys include bronze and brass, in which some of the copper atoms are substituted with either tin or zinc atoms. With the interstitial mechanism, one atom is usually much smaller than the other, and so cannot successfully replace an atom in the crystals of the base metal. The smaller atoms become trapped in the spaces between the atoms in the crystal matrix, called the interstices. This is referred to as an interstitial alloy. Steel is an example of an interstitial alloy, because the very small carbon atoms fit into interstices of the iron matrix. Stainless steel is an example of a combination of interstitial and substitutional alloys, because the carbon atoms fit into the interstices, but some of the iron atoms are replaced with nickel and chromium atoms.[6]

Alloys are often made to alter the mechanical properties of the base metal, to induce hardness, toughness, ductility, or other desired properties. While most metals and alloys can be work hardened by inducing defects in their crystal structure, caused by plastic deformation, some alloys can also have their properties altered by heat treatment. Nearly all metals can be softened by annealing, which repairs the crystal defects, but not as many can be hardened by controlled heating and cooling. Many alloys of aluminum, copper, magnesium, titanium, and nickel can be strengthened to some degree by some method of heat treatment, but few respond to this to the same degree that steel does.[6]

In practice, some alloys are used so predominantly with respect to their base metals that the name of the primary constituent is also used as the name of the alloy. For example, 14 karat gold is an alloy of gold with other elements. Similarly, the silver used in jewelry and the aluminium used as a structural building material are also alloys.

The term "alloy" is sometimes used in everyday speech as a synonym for a particular alloy. For example, automobile wheels made of an aluminium alloy are commonly referred to as simply "alloy wheels", although in point of fact steels and most other metals in practical use are also alloys. 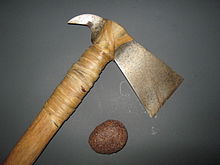 A meteorite is shown below a hatchet that was forged from meteoric iron.

The use of alloys by humans started with the use of meteoric iron, a naturally occurring alloy of nickel and iron. As no metallurgic processes were used to separate iron from nickel, the alloy was used as it was.[7] Meteoric iron could be forged from a red heat to make objects such as tools, weapons, and nails. In many cultures it was shaped by cold hammering into knives and arrowheads. They were often used as anvils. Meteoric iron was very rare and valuable, and difficult for ancient people to work.[8]

Iron is usually found as iron ore on Earth, except for one deposit of native iron in Greenland, which was used by the Inuit people.[9] Native copper, however, was found worldwide, along with silver, gold and platinum, which were also used to make tools, jewelry, and other objects since Neolithic times. Copper was the hardest of these metals, and the most widely distributed. It became one of the most important metals to the ancients. Eventually, humans learned to smelt metals such as copper and tin from ore, and, around 2500 BC, began alloying the two metals to form bronze, which is much harder than its ingredients. Tin was rare, however, being found mostly in Great Britain. In the Middle East, people began alloying copper with zinc to form brass.[10] Ancient civilizations took into account the mixture and the various properties it produced, such as hardness, toughness and melting point, under various conditions of temperature and work hardening, developing much of the information contained in modern alloy constitution diagrams.[11]

The first known smelting of iron began in Anatolia, around 1800 BC. Called the bloomery process, it produced very soft but ductile wrought iron and, by 800 BC, the technology had spread to Europe. Pig iron, a very hard but brittle alloy of iron and carbon, was being produced in China as early as 1200 BC, but did not arrive in Europe until the Middle Ages. These metals found little practical use until the introduction of crucible steel around 300 BC. These steels were of poor quality, and the introduction of pattern welding, around the 1st century AD, sought to balance the extreme properties of the alloys by laminating them, to create a tougher metal.[11]

Mercury had been smelted from cinnabar for thousands of years. Mercury dissolves many metals, such as gold, silver, and tin, to form amalgams (an alloy in a soft paste, or liquid form at ambient temperature). Amalgams have been used since 200 BC in China for plating objects with precious metals, called gilding, such as armor and mirrors. The ancient Romans often used mercury-tin amalgams for gilding their armor. The amalgam was applied as a paste and then heated until the mercury vaporized, leaving the gold, silver, or tin behind.[12] Mercury was often used in mining, to extract precious metals like gold and silver from their ores.[13]

Many ancient civilizations alloyed metals for purely aesthetic purposes. In ancient Egypt and Mycenae, gold was often alloyed with copper to produce red-gold, or iron to produce a bright burgundy-gold. Silver was often found alloyed with gold. These metals were also used to strengthen each other, for more practical purposes. Quite often, precious metals were alloyed with less valuable substances as a means to deceive buyers.[14] Around 250 BC, Archimedes was commissioned by the king to find a way to check the purity of the gold in a crown, leading to the famous bath-house shouting of "Eureka!" upon the discovery of Archimedes' principle.[15]

While the use of iron started to become more widespread around 1200 BC, mainly because of interruptions in the trade routes for tin, the metal is much softer than bronze. However, very small amounts of steel, (an alloy of iron and around 1% carbon), was always a byproduct of the bloomery process. The ability to modify the hardness of steel by heat treatment had been known since 1100 BC, and the rare material was valued for use in tool and weapon making. Because the ancients could not produce temperatures high enough to melt iron fully, the production of steel in decent quantities did not occur until the introduction of blister steel during the Middle Ages. This method introduced carbon by heating wrought iron in charcoal for long periods of time, but the penetration of carbon was not very deep, so the alloy was not homogeneous. In 1740, Benjamin Huntsman began melting blister steel in a crucible to even out the carbon content, creating the first process for the mass production of tool steel. Huntsman's process was used for manufacturing tool steel until the early 1900s.[16]

With the introduction of the blast furnace to Europe in the Middle Ages, pig iron was able to be produced in much higher volumes than wrought iron. Because pig iron could be melted, people began to develop processes of reducing the carbon in the liquid pig iron to create steel. Puddling was introduced during the 1700s, where molten pig iron was stirred while exposed to the air, to remove the carbon by oxidation. In 1858, Sir Henry Bessemer developed a process of steel making by blowing hot air through liquid pig iron to reduce the carbon content. The Bessemer process was able to produce the first large scale manufacture of steel.[16] Once the Bessemer process began to gain widespread use, other alloys of steel began to follow, such as mangalloy, an alloy of steel and manganese, which exhibits extreme hardness and toughness.[17]