A bearing is a device to allow constrained relative motion between two or more parts, typically rotation or linear movement. Bearings may be classified broadly according to the motions they allow and according to their principle of operation as well as by the directions of applied loads they can handle. 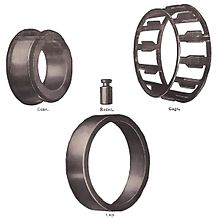 Though it is often claimed that the Egyptians used roller bearings in the form of tree trunks under sleds[1] this is modern speculation.[2] They are depicted in their own drawings in the tomb of Djehutihotep [3] as moving massive stone blocks on sledges with the runners lubricated with a liquid which would constitute a plain bearing.

There are also Egyptian drawings of bearings used with hand drills.[4]

The earliest recovered example of a rolling element bearing is a wooden ball bearing supporting a rotating table from the remains of the Roman Nemi ships in Lake Nemi, Italy. The wrecks were dated to 40 AD.[5][6]

Leonardo da Vinci incorporated drawings of ball bearings in his design for a helicopter around the year 1500. This is the first recorded use of bearings in an aerospace design. However, Agostino Ramelli is the first to have published sketches of roller and thrust bearings.[1] An issue with ball and roller bearings is that the balls or rollers rub against each other causing additional friction which can be prevented by enclosing the balls or rollers in a cage. The captured, or caged, ball bearing was originally described by Galileo in the 17th century.[citation needed] The mounting of bearings into a set was not accomplished for many years after that. The first patent for a ball race was by Philip Vaughan of Carmarthen in 1794.

Bearings saw use for holding wheel and axles. The bearings used there were plain bearings that were used to greatly reduce friction over that of dragging an object by making the friction act over a shorter distance as the wheel turned.

The first plain and rolling-element bearings were wood closely followed by bronze. Over their history bearings have been made of many materials including ceramic, sapphire, glass, steel, bronze, other metals and plastic (e.g., nylon, polyoxymethylene, polytetrafluoroethylene, and UHMWPE) which are all used today.

Even basic materials can have good durability. As examples, wooden bearings can still be seen today in old clocks or in water mills where the water provides cooling and lubrication.

The first practical caged-roller bearing was invented in the mid-1740s by horologist John Harrison for his H3 marine timekeeper. This uses the bearing for a very limited oscillating motion but Harrison also used a similar bearing in a truly rotary application in a contemporaneous regulator clock.

A patent on ball bearings, reportedly the first, was awarded to Jules Suriray, a Parisian bicycle mechanic, on 3 August 1869. The bearings were then fitted to the winning bicycle ridden by James Moore in the world's first bicycle road race, Paris-Rouen, in November 1869.[7]

The idea of Friedrich Fischer, founder of FAG, from the year 1883 for milling and grinding balls of equal size and exact roundness by means of a suitable production machine formed the foundation for creation of an independent bearing industry.

The modern, self-aligning design of ball bearing is attributed to Sven Wingquist of the SKF ball-bearing manufacturer in 1907, when he was awarded Swedish patent No. 25406 on its design.

Henry Timken, a 19th century visionary and innovator in carriage manufacturing, patented the tapered roller bearing, in 1898. The following year, he formed a company to produce his innovation. Through a century, the company grew to make bearings of all types, specialty steel and an array of related products and services.

Erich Franke invented and patented the wire race bearing in 1934. His focus was on a bearing design with a cross section as small as possible and which could be integrated into the enclosing design. After World War II he founded together with Gerhard Heydrich the company Franke & Heydrich KG (today Franke GmbH) to push the development and production of wire race bearings.

Richard Stribeck’s extensive research [8][9] on ball bearing steels identified the metallurgy of the commonly used 100Cr6 (AISI 52100) [10] showing coefficient of friction as a function of pressure.

In the early 1980s, Pacific Bearing's founder, Robert Schroeder, invented the first bi-material plain bearing which was size interchangeable with linear ball bearings. This bearing had a metal shell (aluminum, steel or stainless steel) and a layer of Teflon-based material connected by a thin adhesive layer.[12]

Today ball and roller bearings are used in many applications which include a rotating component. Examples include ultra high speed bearings in dental drills, aerospace bearings in the Mars Rover, gearbox and wheel bearings on automobiles, flexure bearings in optical alignment systems and bicycle wheel hubs.

By far, the most common bearing is the plain bearing, a bearing which uses surfaces in rubbing contact, often with a lubricant such as oil or graphite. A plain bearing may or may not be a discrete device. It may be nothing more than the bearing surface of a hole with a shaft passing through it, or of a planar surface that bears another (in these cases, not a discrete device); or it may be a layer of bearing metal either fused to the substrate (semi-discrete) or in the form of a separable sleeve (discrete). With suitable lubrication, plain bearings often give entirely acceptable accuracy, life, and friction at minimal cost. Therefore, they are very widely used.

However, there are many applications where a more suitable bearing can improve efficiency, accuracy, service intervals, reliability, speed of operation, size, weight, and costs of purchasing and operating machinery.

Thus, there are many types of bearings, with varying shape, material, lubrication, principle of operation, and so on.

There are at least six common principles of operation:

Common motions permitted by bearings are:

Reducing friction in bearings is often important for efficiency, to reduce wear and to facilitate extended use at high speeds and to avoid overheating and premature failure of the bearing. Essentially, a bearing can reduce friction by virtue of its shape, by its material, or by introducing and containing a fluid between surfaces or by separating the surfaces with an electromagnetic field.

Combinations of these can even be employed within the same bearing. An example of this is where the cage is made of plastic, and it separates the rollers/balls, which reduce friction by their shape and finish.

Bearings vary greatly over the size and directions of forces that they can support.

Forces can be predominately radial, axial (thrust bearings) or bending moments perpendicular to the main axis.

Different bearing types have different operating speed limits. Speed is typically specified as maximum relative surface speeds, often specified ft/s or m/s. Rotational bearings typically describe performance in terms of the product DN where D is the diameter (often in mm) of the bearing and N is the rotation rate in revolutions per minute.

Some applications apply bearing loads from varying directions and accept only limited play or "slop" as the applied load changes. One source of motion is gaps or "play" in the bearing. For example, a 10 mm shaft in a 12 mm hole has 2 mm play.

Allowable play varies greatly depending on the use. As example, a wheelbarrow wheel supports radial and axial loads. Axial loads may be hundreds of newtons force left or right, and it is typically acceptable for the wheel to wobble by as much as 10 mm under the varying load. In contrast, a lathe may position a cutting tool to ±0.02 mm using a ball lead screw held by rotating bearings. The bearings support axial loads of thousands of newtons in either direction, and must hold the ball lead screw to ±0.002 mm across that range of loads.

A second source of motion is elasticity in the bearing itself. For example, the balls in a ball bearing are like stiff rubber, and under load deform from round to a slightly flattened shape. The race is also elastic and develops a slight dent where the ball presses on it.

The stiffness of a bearing is how the distance between the parts which are separated by the bearing varies with applied load. With rolling element bearings this is due to the strain of the ball and race. With fluid bearings it is due to how the pressure of the fluid varies with the gap (when correctly loaded, fluid bearings are typically stiffer than rolling element bearings).

Fluid and magnetic bearings can have practically indefinite service lives. In practice, there are fluid bearings supporting high loads in hydroelectric plants that have been in nearly continuous service since about 1900 and which show no signs of wear.

Rolling element bearing life is determined by load, temperature, maintenance, lubrication, material defects, contamination, handling, installation and other factors. These factors can all have a significant effect on bearing life. For example, the service life of bearings in one application was extended dramatically by changing how the bearings were stored before installation and use, as vibrations during storage caused lubricant failure even when the only load on the bearing was its own weight;[13] the resulting damage is often false brinelling. Bearing life is statistical: several samples of a given bearing will often exhibit a bell curve of service life, with a few samples showing significantly better or worse life. Bearing life varies because microscopic structure and contamination vary greatly even where macroscopically they seem identical.

For plain bearings some materials give much longer life than others. Some of the John Harrison clocks still operate after hundreds of years because of the lignum vitae wood employed in their construction, whereas his metal clocks are seldom run due to potential wear.

Although long bearing life is often desirable, it is sometimes not necessary. Harris describes a bearing for a rocket motor oxygen pump that gave several hours life, far in excess of the several tens of minutes life needed.[13]

Bearings are often specified to give an "L10" life (outside the USA, it may be referred to as "B10" life.) This is the life at which ten percent of the bearings in that application can be expected to have failed due to classical fatigue failure (and not any other mode of failure like lubrication starvation, wrong mounting etc.), or, alternatively, the life at which ninety percent will still be operating.The L10 life of the bearing is theoretical life and may not represent service life of the bearing. Bearings are also rated using C0 (static loading) value. This is the basic load rating as a reference, and not an actual load value.

The service life of the bearing is affected by many parameters that are not controlled by the bearing manufactures. For example, bearing mounting, temperature, exposure to external environment, lubricant cleanliness and electrical currents through bearings etc.

Many bearings require periodic maintenance to prevent premature failure, although some such as fluid or magnetic bearings may require little maintenance.

Most bearings in high cycle operations need periodic lubrication and cleaning, and may require adjustment to minimise the effects of wear.

Bearing life is often much better when the bearing is kept clean and well-lubricated. However, many applications make good maintenance difficult. For example bearings in the conveyor of a rock crusher are exposed continually to hard abrasive particles. Cleaning is of little use because cleaning is expensive, yet the bearing is contaminated again as soon as the conveyor resumes operation. Thus, a good maintenance program might lubricate the bearings frequently but never clean them.

There are many different types of bearings.