Bearing (navigation)
This article is about the navigational term. For other uses, see Bearing. 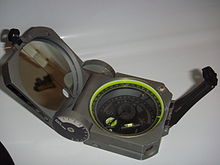 A standard Brunton Geo compass, used commonly by geologists and surveyors to obtain a bearing in the field.

US Army Definition Of Bearing

A bearing can be taken on another vessel to aid piloting. If the two vessels are traveling toward each other and the relative bearing remains the same over time, there is likelihood of collision and action needs to be taken by one or both vessels to prevent this.

A bearing can be taken to a fixed or moving object in order to target it with gunfire or missiles. This is mainly used by ground troops when using an air-strike on the target.

Types of bearings include:

A true bearing is measured in relation to the fixed horizontal reference plane of true north, that is, using the direction toward the geographic north pole as a reference point.

A magnetic bearing is measured in relation to magnetic north, that is, using the direction toward the magnetic north pole (in northeastern Canada) as a reference.

A grid bearing is measured in relation to the fixed horizontal reference plane of grid north, that is, using the direction northwards along the grid lines of the map projection as a reference point.

A compass bearing, as in vehicle or marine navigation, is measured in relation to the magnetic compass of the navigator's vehicle or vessel (if aboard ship). It should be very close to the magnetic bearing. The difference between a magnetic bearing and a compass bearing is the deviation caused to the compass by ferrous metals and local magnetic fields generated by any variety of vehicle or shipboard sources (steel vehicle bodies/frames or vessel hulls, ignition systems, etc.)

A relative bearing is one in which the reference direction is straight ahead, where the bearing is measured relative to the direction the navigator is facing (on land) or in relation to the vessel's bow (aboard ship).

There are several methods used to measure navigation bearings:

1. In land navigation, a bearing is ordinarily calculated in a clockwise direction starting from a reference direction of 0° and increasing to 359.9 degrees.[5] Measured in this way, a bearing is referred to as an azimuth by the US Army but not by armies in other English speaking nations, which use the term bearing.[6] If the reference direction is north (either true north, magnetic north, or grid north), the bearing is termed an absolute bearing. In a contemporary land navigation context, true, magnetic, and grid bearings are always measured in this way, with true north, magnetic north, or grid north being 0° in a 360-degree system.[5]

2. In aircraft navigation, an angle is normally measured from the aircraft's track or heading, in a clockwise direction. If the aircraft encounters a target that is not ahead of the aircraft and not on an identical track, then the angular bearing to that target is called a relative bearing. (needs clarification: track and heading are not usually the same number due to wind)

4. An informal method of measuring a relative bearing is by using the 'clock method'. In this method, the direction a vessel, aircraft or object is measured as if a clock face is laid over the vessel or aircraft, with the number twelve pointing forward. Something straight ahead is at 'twelve o'clock', while something directly off to the right is at 'three o'clock'. This method is only used for a relative bearing.

5. In land surveying, a bearing is the clockwise or counterclockwise angle between north or south and a direction. For example, bearings are recorded as N57°E, S51°E, S21°W, N87°W, or N15°W. In surveying, bearings can be referenced to true north, magnetic north, grid north (the Y axis of a map projection), or a previous map, which is often a historical magnetic north.

Generalizing this to two angular dimensions, a bearing is the combination of antenna azimuth and elevation required to point (aim) an antenna in a given direction. The bearing for geostationary satellites is constant. The bearing for polar-orbiting satellites varies continuously.