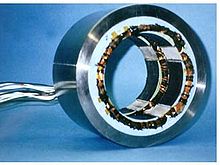 A magnetic bearing is a bearing which supports a load using magnetic levitation. Magnetic bearings support moving machinery without physical contact, for example, they can levitate a rotating shaft and permit relative motion with very low friction and no mechanical wear. They are in service in such industrial applications as electric power generation, petroleum refining, machine tool operation and natural gas pipelines. They are also used in the Zippe-type centrifuge[1] used for uranium enrichment. Magnetic bearings are used in turbomolecular pumps where oil-lubricated bearings are a source of contamination. Magnetic bearings support the highest speeds of any kind of bearing; they have no known maximum relative speed.

It is difficult to build a magnetic bearing using permanent magnets due to the limitations described by Earnshaw's theorem, and techniques using diamagnetic materials are relatively undeveloped. As a result, most magnetic bearings require continuous power input and an active control system to hold the load stable. Many bearings can use permanent magnets to carry the static load, and then only use power when the levitated object deviates from its optimum position. Magnetic bearings also typically require some kind of back-up bearing in case of power or control system failure and during initial start-up conditions.

Two sorts of instabilities are very typically present with magnetic bearings. Firstly, attractive magnets give an unstable static force that decreases with greater distance and increases at close distances. Secondly since magnetism is a conservative force, in and of itself it gives little if any damping, and oscillations may cause loss of successful suspension if any driving forces are present, which they very typically are.

With the use of an induction-based levitation system present in maglev technologies such as the Inductrack system, magnetic bearings could do away with complex control systems by using Halbach Arrays and simple closed loop coils. These systems gain in simplicity, but are less advantageous when it comes to eddy current losses. For rotating systems it is possible to use homopolar magnet designs instead of multipole halbach structures, which reduces losses considerably. An example of this - that has solved the Earnshaws theorem - is the homopolar electrodynamic bearings invented by Dr Torbjörn Lembke.[2][3][4] 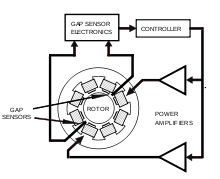 Basic operation for a single axis

An active magnetic bearing (AMB) works on the principle of electromagnetic suspension and consists of an electromagnet assembly, a set of power amplifiers which supply current to the electromagnets, a controller, and gap sensors with associated electronics to provide the feedback required to control the position of the rotor within the gap. These elements are shown in the diagram. The power amplifiers supply equal bias current to two pairs of electromagnets on opposite sides of a rotor. This constant tug-of-war is mediated by the controller which offsets the bias current by equal but opposite perturbations of current as the rotor deviates by a small amount from its center position.

The gap sensors are usually inductive in nature and sense in a differential mode. The power amplifiers in a modern commercial application are solid state devices which operate in a pulse width modulation (PWM) configuration. The controller is usually a microprocessor or DSP.

Active bearings have several advantages, they do not suffer from wear, they have low friction, and they can often accommodate irregularities in the mass distribution automatically, allowing it to spin around its centre of mass with very low vibration.

Early active magnetic bearing patents were assigned to Jesse Beams[5][6] at the University of Virginia during World War II and are concerned with ultracentrifuges for purification of the isotopes of various elements for the manufacture of the first nuclear bombs, but the technology did not mature until the advances of solid-state electronics and modern computer-based control technology with the work of Habermann[7] and Schweitzer.[8] Extensive modern work in magnetic bearings has continued at the University of Virginia in the Rotating Machinery and Controls Industrial Research Program. The first international symposium for active magnetic bearing technology was held in 1988 with the founding of the International Society of Magnetic Bearings by Prof. Schweitzer (ETHZ), Prof. Allaire (University of Virginia), and Prof. Okada (Ibaraki University).

In 1987 further improved AMB designs were created in Australia by E.Croot [9] (see reference below as well) but these designs were not manufactured due to expensive costs of production. However, some of those designs have since been used by Japanese electronics companies, they remain a specialty item: where extremely high RPM is required.

Since then there have been nine succeeding symposia. Kasarda[10] reviews the history of AMB in depth. She notes that the first commercial application of AMB’s was with turbomachinery. The AMB allowed the elimination of oil reservoirs on compressors for the NOVA Gas Transmission Ltd. (NGTL) gas pipelines in Alberta, Canada. This reduced the fire hazard allowing a substantial reduction in insurance costs. The success of these magnetic bearing installations led NGTL to pioneer the research and development of a digital magnetic bearing control system as a replacement for the analog control systems supplied by the American company Magnetic Bearings Inc. (MBI). In 1992, NGTL's magnetic bearing research group formed the company Revolve Technologies Inc [1]. to commercialize the digital magnetic bearing technology. This firm was later purchased by SKF of Sweden. The French company S2M, founded in 1976, was the first to commercially market AMB’s. Extensive research on magnetic bearings continues at the University of Virginia in the Rotating Machinery and Controls Industrial Research Program [2].

Starting from 1996 the Dutch oil and gas company NAM installed over a period of 10 years 20 large E-motor driven (with variable speed drive) gas compressors of 23 MW fully equipped with AMB's on both the E-motor and the compressor. These compressors are used in the Groningen gas field to deplete the remaining gas from this large gas field and to increase the field capacity. The motor - compressor design is done by Siemens and the AMB are delivered by Waukesha (owned by Dover). (Originally these bearings were designed by Glacier, this company is later on taken over by Federal Mogul and now part of Waukesha) By using AMB's and a direct drive between motor and compressor (so no the gearbox in between) and applying dry gas seals a full so called dry-dry system (=fully oil free) has been installed. A few of the main advantages by applying AMB's in the driver as well as in the compressor (compared to the traditional configuration with a gearbox, plain bearings and a gasturbine-driver) is a relative simple system with a very wide operating envelope, high efficiencies (particularly at partial load) and also, as done in the Groningen field, to install the full installation outdoors (no large compressor building needed). 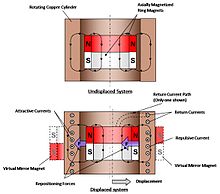 Electrodynamic bearings (EDB) are a novel type of bearing that is a passive magnetic technology. EDBs do not require any control electronics to operate. They work by the electrical currents generated by motion causing a restoring force.

A new application of magnetic bearings is their use in artificial hearts. The use of magnetic suspension in ventricular assist devices was pioneered by Prof. Paul Allaire and Prof. Houston Wood at the University of Virginia culminating in the first magnetically suspended ventricular assist centrifugal pump (VAD) in 1999.[citation needed]