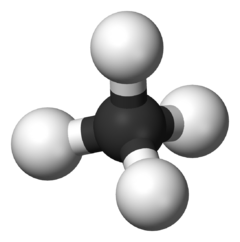 Ball-and-stick model of the methane molecule, CH4. Methane is part of a homologous series known as the alkanes, which contain single bonds only.

In organic chemistry, a hydrocarbon is an organic compound consisting entirely of hydrogen and carbon.[1] Hydrocarbons from which one hydrogen atom has been removed are functional groups, called hydrocarbyls.[2] Aromatic hydrocarbons (arenes), alkanes, alkenes, cycloalkanes and alkyne-based compounds are different types of hydrocarbons.

The majority of hydrocarbons found naturally occur in crude oil, where decomposed organic matter provides an abundance of carbon and hydrogen which, when bonded, can catenate to form seemingly limitless chains.[3][4]

The classifications for hydrocarbons defined by IUPAC nomenclature of organic chemistry are as follows:

Because of differences in molecular structure, the empirical formula remains different between hydrocarbons; in linear, or "straight-run" alkanes, alkenes and alkynes, the amount of bonded hydrogen lessens in alkenes and alkynes due to the "self-bonding" or catenation of carbon preventing entire saturation of the hydrocarbon by the formation of double or triple bonds.

This inherent ability of hydrocarbons to bond to themselves is referred to as catenation, and allows hydrocarbon to form more complex molecules, such as cyclohexane,and in rarer cases, arenes such as benzene. This ability comes from the fact that bond character between carbon atoms is entirely non-polar,in that the distribution of electrons between the two elements is somewhat even due to the same electronegativity values of the elements (~0.30), and does not result in the formation of an electrophile.

Generally, with catenation comes the loss of the total amount of bonded hydrocarbons and an increase in the amount of energy required for bond cleavage due to strain exerted upon the molecule;in molecules such as cyclohexane, this is referred to as ring strain, and occurs due to the "destabilized" spatial electron configuration of the atom.

In simple chemistry, as per valence bond theory, the carbon atom must follow the "4-hydrogen rule",which states that the maximum number of atoms available to bond with carbon is equal to the number of electrons that are attracted into the outer shell of carbon.In terms of shells, carbon consists of an incomplete outer shell, which comprises 4 electrons,and thus has 4 electrons available for covalent or dative bonding.

Hydrocarbons are hydrophobic and are lipids.

Some hydrocarbons also are abundant in the solar system. Lakes of liquid methane and ethane have been found on Titan, Saturn's largest moon, confirmed by the Cassini-Huygens Mission.[11] Hydrocarbons are also abundant in nebulae forming polycyclic aromatic hydrocarbons - PAH compounds.

Simple hydrocarbons and their variations

Hydrocarbons are one of the Earth's most important energy resources. The predominant use of hydrocarbons is as a combustible fuel source. In their solid form, hydrocarbons take the form of asphalt.[12]

Methane [1C] and ethane [2C] are gaseous at ambient temperatures and cannot be readily liquefied by pressure alone. Propane [3C] is however easily liquefied, and exists in 'propane bottles' mostly as a liquid. Butane [4C] is so easily liquefied that it provides a safe, volatile fuel for small pocket lighters. Pentane [5C] is a clear liquid at room temperature, commonly used in chemistry and industry as a powerful nearly odorless solvent of waxes and high molecular weight organic compounds, including greases. Hexane [6C] is also a widely used non-polar, non-aromatic solvent, as well as a significant fraction of common gasoline.

The [6C] through [10C] alkanes, alkenes and isomeric cycloalkanes are the top components of gasoline, naptha, jet fuel and specialized industrial solvent mixtures. With the progressive addition of carbon units, the simple non-ring structured hydrocarbons have higher viscosities, lubricating indices, boiling points, solidification temperatures, and deeper color. At the opposite extreme from [1C] methane lie the heavy tars that remain as the lowest fraction in a crude oil refining retort. They are collected and widely utilized as roofing compounds, pavement composition, wood preservatives (the creosote series) and as extremely high viscosity sheer-resisting liquids.

Hydrocarbons are currently the main source of the world’s electric energy and heat sources (such as home heating) because of the energy produced when burnt. Often this energy is used directly as heat such as in home heaters, which use either oil or natural gas. The hydrocarbon is burnt and the heat is used to heat water, which is then circulated. A similar principle is used to create electric energy in power plants.

Common properties of hydrocarbons are the facts that they produce steam, carbon dioxide and heat during combustion and that oxygen is required for combustion to take place. The simplest hydrocarbon, methane, burns as follows:

Another example of this property is propane:

Burning of hydrocarbons is an example of exothermic chemical reaction. Oil refineries are one way hydrocarbons are processed for use. Crude oil is processed in several stages to form desired hydrocarbons, used as fuel and in other products.

Extracted hydrocarbons in a liquid form are referred to as petroleum (literally "rock oil") or mineral oil, whereas hydrocarbons in a gaseous form are referred to as natural gas. Petroleum and natural gas are found in the Earth's subsurface with the tools of petroleum geology and are a significant source of fuel and raw materials for the production of organic chemicals.

The extraction of liquid hydrocarbon fuel from sedimentary basins is integral to modern energy development. Hydrocarbons are mined from tar sands and oil shale, and potentially extracted from sedimentary methane hydrates. These reserves require distillation and upgrading to produce synthetic crude and petroleum.

Oil reserves in sedimentary rocks are the source of hydrocarbons for the energy, transport and petrochemical industry.

Hydrocarbons are economically important because major fossil fuels such as coal, petroleum and natural gas, and its derivatives such as plastics, paraffin, waxes, solvents and oils are hydrocarbons. Hydrocarbons – along with NOx and sunlight – contribute to the formation of tropospheric ozone and greenhouse gases.