For ordinary communication, to spare a tedious description, the official IUPAC naming recommendations are not always followed in practice except when it is necessary to give a concise definition to a compound, or when the IUPAC name is simpler (e.g. ethanol against ethyl alcohol). Otherwise the common or trivial name may be used, often derived from the source of the compound (See Sec 6. below)

In chemistry, a number of prefixes, suffixes and infixes are used to describe the type and position of functional groups in the compound.

The steps to naming an organic compound are:

Example:
Here is a sample molecule with the parent carbons numbered:

For simplicity, here is an image of the same molecule, where the hydrogens in the parent chain are removed and the carbons are shown by their numbers:

Now, we go by the steps:

Straight-chain alkanes take the suffix "-ane" and are prefixed depending on the number of carbon atoms in the chain, following standard rules. The first few are:

For example, the simplest alkane is CH4 methane, and the nine-carbon alkane CH3(CH2)7CH3 is named nonane. The names of the first four alkanes were derived from methanol, ether, propionic acid and butyric acid, respectively. The rest are named with a Greek numeric prefix, with the exceptions of nonane which has a Latin prefix, and undecane and tridecane which have mixed-language prefixes.

Cyclic alkanes are simply prefixed with "cyclo-", for example C4H8 is cyclobutane and C6H12 is cyclohexane.

Branched alkanes are named as a straight-chain alkane with attached alkyl groups. They are prefixed with a number indicating the carbon the group is attached to, counting from the end of the alkane chain. For example, (CH3)2CHCH3, commonly known as isobutane, is treated as a propane chain with a methyl group bonded to the middle (2) carbon, and given the systematic name 2-methylpropane. However, although the name 2-methylpropane COULD be used, it is easier and more logical to call it simply methylpropane - the methyl group could not possibly occur on any of the other carbon atoms (that would lengthen the chain and result in butane, not propane) and therefore the use of the number "2" is not necessary.

If there is ambiguity in the position of the substituent, depending on which end of the alkane chain is counted as "1", then numbering is chosen so that the smallest number is used. For example, (CH3)2CHCH2CH3 (isopentane) is named 2-methylbutane, not 3-methylbutane.

If there are multiple side-branches of the same size alkyl group, their positions are separated by commas and the group prefixed with di-, tri-, tetra-, etc., depending on the number of branches (e.g. C(CH3)4 2,2-dimethylpropane). If there are different groups, they are added in alphabetical order, separated by commas or hyphens: 3-ethyl-4-methylhexane. The longest possible main alkane chain is used; therefore 3-ethyl-4-methylhexane instead of 2,3-diethylpentane, even though these describe equivalent structures. The di-, tri- etc. prefixes are ignored for the purpose of alphabetical ordering of side chains (e.g. 3-ethyl-2,4-dimethylpentane, not 2,4-dimethyl-3-ethylpentane). 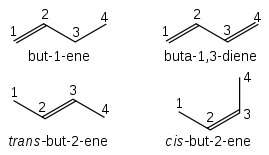 Alkenes are named for their parent alkane chain with the suffix "-ene" and an infixed number indicating the position of the double-bonded carbon in the chain: CH2=CHCH2CH3 is but-1-ene. Multiple double bonds take the form -diene, -triene, etc., with the size prefix of the chain taking an extra "a": CH2=CHCH=CH2 is buta-1,3-diene. Simple cis and trans isomers are indicated with a prefixed cis- or trans-: cis-but-2-ene, trans-but-2-ene. More complex geometric isomerisations are described using the Cahn Ingold Prelog priority rules.

Alk is the prefix of the group (Meth, Eth, Prop, etc.)

If higher precedence functional groups are present (see order of precedence, below), the prefix "hydroxy" is used with the bonding position: CH3CHOHCOOH is 2-hydroxypropanoic acid.

Halogen functional groups are prefixed with the bonding position and take the form fluoro-, chloro-, bromo-, iodo-, etc., depending on the halogen. Multiple groups are dichloro-, trichloro-, etc., and dissimilar groups are ordered alphabetically as before. For example, CHCl3 (chloroform) is trichloromethane. The anesthetic Halothane (CF3CHBrCl) is 2-bromo-2-chloro-1,1,1-trifluoroethane.

In general ketones (R-CO-R) take the suffix "-one" (pronounced own, not won) with an infix position number: CH3CH2CH2COCH3 is pentan-2-one. If a higher precedence suffix is in use, the prefix "oxo-" is used: CH3CH2CH2COCH2CHO is 3-oxohexanal. 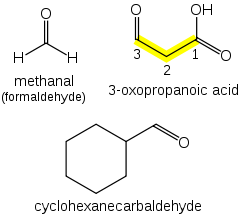 If a prefix form is required, "oxo-" is used (as for ketones), with the position number indicating the end of a chain: CHOCH2COOH is 3-oxopropanoic acid. If the carbon in the carbonyl group cannot be included in the attached chain (for instance in the case of cyclic aldehydes), the prefix "formyl-" or the suffix "-carbaldehyde" is used: C6H11CHO is cyclohexanecarbaldehyde. If an aldehyde is attached to a benzene and is the main functional group, the suffix becomes benzaldehyde.

In general carboxylic acids are named with the suffix -oic acid (etymologically a back-formation from benzoic acid). As for aldehydes, they take the "1" position on the parent chain, but do not have their position number indicated. For example, CH3CH2CH2CH2COOH (valeric acid) is named pentanoic acid. For common carboxylic acids some traditional names such as acetic acid are in such widespread use they are considered retained IUPAC names, although "systematic" names such as ethanoic acid are also acceptable. For carboxylic acids attached to a benzene ring such as Ph-COOH, these are named as benzoic acid or its derivatives.

Ethers (R-O-R) consist of an oxygen atom between the two attached carbon chains. The shorter of the two chains becomes the first part of the name with the -ane suffix changed to -oxy, and the longer alkane chain become the suffix of the name of the ether. Thus CH3OCH3 is methoxymethane, and CH3OCH2CH3 is methoxyethane (not ethoxymethane). If the oxygen is not attached to the end of the main alkane chain, then the whole shorter alkyl-plus-ether group is treated as a side-chain and prefixed with its bonding position on the main chain. Thus CH3OCH(CH3)2 is 2-methoxypropane.

Esters (R-CO-O-R') are named as alkyl derivatives of carboxylic acids. The alkyl (R') group is named first. The R-CO-O part is then named as a separate word based on the carboxylic acid name, with the ending changed from -oic acid to -oate. For example, CH3CH2CH2CH2COOCH3 is methyl pentanoate, and (CH3)2CHCH2CH2COOCH2CH3 is ethyl 4-methylpentanoate. For esters such as ethyl acetate (CH3COOCH2CH3), ethyl formate (HCOOCH2CH3) or dimethyl phthalate that are based on common acids, IUPAC recommends use of these established names, called retained names. The -oate changes to -ate. Some simple examples, named both ways, are shown in the figure above.

If the alkyl group is not attached at the end of the chain, the bond position to the ester group is infixed before "-yl": CH3CH2CH(CH3)OOCCH2CH3 may be called but-2-yl propanoate or but-2-yl propionate. 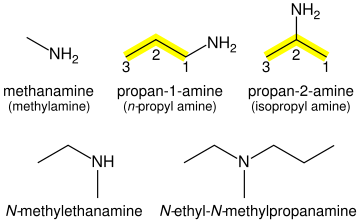 Amines (R-NH2) are named for the attached alkane chain with the suffix "-amine" (e.g. CH3NH2 Methyl Amine). If necessary, the bonding position is infixed: CH3CH2CH2NH2 propan-1-amine, CH3CHNH2CH3 propan-2-amine. The prefix form is "amino-".

For secondary amines (of the form R-NH-R), the longest carbon chain attached to the nitrogen atom becomes the primary name of the amine; the other chain is prefixed as an alkyl group with location prefix given as an italic N: CH3NHCH2CH3 is N-methylethanamine. Tertiary amines (R-NR-R) are treated similarly: CH3CH2N(CH3)CH2CH2CH3 is N-ethyl-N-methylpropanamine. Again, the substituent groups are ordered alphabetically.

Amides (R-CO-NH2) take the suffix "-amide", or "-carboxamide" if the carbon in the amide group cannot be included in the main chain . The prefix form is both "carbamoyl-" and "amido-".

Secondary and tertiary amides are treated similarly to the case of amines: alkane chains bonded to the nitrogen atom are treated as substituents with the location prefix N: HCON(CH3)2 is N,N-dimethylmethanamide.

Cycloalkanes and aromatic compounds can be treated as the main parent chain of the compound, in which case the position of substituents are numbered around the ring structure. For example, the three isomers of xylene CH3C6H4CH3, commonly the ortho-, meta-, and para- forms, are 1,2-dimethylbenzene, 1,3-dimethylbenzene, and 1,4-dimethylbenzene. The cyclic structures can also be treated as functional groups themselves, in which case they take the prefix "cycloalkyl-" (e.g. "cyclohexyl-") or for benzene, "phenyl-".

The IUPAC nomenclature scheme becomes rapidly more elaborate for more complex cyclic structures, with notation for compounds containing conjoined rings, and many common names such as phenol, furan, indole, etc. being accepted as base names for compounds derived from them.

Order of precedence of groups

When compounds contain more than one functional group, the order of precedence determines which groups are named with prefix or suffix forms. The highest precedence group takes the suffix, with all others taking the prefix form. However, double and triple bonds only take suffix form (-en and -yn) and are used with other suffixes.

Prefixed substituents are ordered alphabetically (excluding any modifiers such as di-, tri-, etc.), e.g. chlorofluoromethane, not fluorochloromethane. If there are multiple functional groups of the same type, either prefixed or suffixed, the position numbers are ordered numerically (thus ethane-1,2-diol, not ethane-2,1-diol.) The N position indicator for amines and amides comes before "1", e.g. CH3CH(CH3)CH2NH(CH3) is N,2-dimethylpropanamine.

*Note: These suffixes, in which the carbon atom is counted as part of the preceding chain, are the most commonly used. See individual functional group articles for more details.

Common nomenclature is an older system of naming organic compounds. Instead of using the prefixes for the carbon skeleton above, another system is used. The pattern can be seen below.

Common names for ketones can be derived by naming the two alkyl or aryl groups bonded to the carbonyl group as separate words followed by the word ketone.

The first three of the names shown above are still considered to be acceptable IUPAC names.

The common name for an aldehyde is derived from the common name of the corresponding carboxylic acid by dropping the word acid and changing the suffix from -ic or -oic to -aldehyde.

Hydron is a generic term for hydrogen cation; protons, deuterons and tritons are all hydrons.

Simple cations formed by adding a hydron to a hydride of a halogen, chalcogen or nitrogen-family element are named by adding the suffix "-onium" to the element's root: H4N+ is ammonium, H3O+ is oxonium, and H2F+ is fluoronium. Ammonium was adopted instead of nitronium, which commonly refers to NO2+.

If the cationic center of the hydride is not a halogen, chalcogen or nitrogen-family element then the suffix "-ium" is added to the name of the neutral hydride after dropping any final 'e'. H5C+ is methanium, HO-(O+)-H2 is dioxidanium (HO-OH is dioxidane), and H2N-(N+)-H3 is diazanium (H2N-NH2 is diazane).

The above cations except for methanium are not, strictly speaking, organic, since they do not contain carbon. However, many organic cations are obtained by substituting another element or some functional group for a hydrogen.

The name of each substitution is prefixed to the hydride cation name. If many substitutions by the same functional group occur, then the number is indicated by prefixing with "di-", "tri-" as with halogenation. (CH3)3O+ is trimethyloxonium. CH3F3N+ is trifluoromethylammonium.