Diethyl ether, also known as ethyl ether, simply ether, or ethoxyethane, is an organic compound in the ether class with the formula (C2H5)2O. It is a colorless, highly volatile flammable liquid with a characteristic odor. It is commonly used as a solvent and was once used as a general anesthetic.

The compound may have been created by either Jābir ibn Hayyān in the 8th century[2] or Raymundus Lullus in 1275,[2][3] although there is no contemporary evidence of this. It was first synthesized in 1540 by Valerius Cordus and, who called it "sweet oil of vitriol" (oleum dulce vitrioli)—the name reflects the fact that it is obtained by distilling a mixture of ethanol and sulfuric acid (then known as oil of vitriol)—and noted some of its medicinal properties.[2] At about the same time, Theophrastus Bombastus von Hohenheim, better known as Paracelsus, discovered ether's analgesic properties in chickens.[2] The name ether was given to the substance in 1730 by August Sigmund Frobenius.

It is particularly important as a solvent in the production of cellulose plastics such as cellulose acetate.[4]

Diethyl ether has a high cetane number of 85-96 and is used as a starting fluid for diesel and gasoline engines[5] because of its high volatility and low autoignition temperature. For the same reason it is also used as a component of the fuel mixture for carbureted compression ignition model engines.

Diethyl ether is a common laboratory solvent. It has limited solubility in water (6.9 g/100 mL)[citation needed] and dissolves 1.5 g/100 mL water at 25 °C.[6] Therefore, it is commonly used for liquid-liquid extraction. When used with an aqueous solution, the organic layer is on top as the diethyl ether has a lower density than the water. It is also a common solvent for the Grignard reaction in addition to other reactions involving organometallic reagents. Due to its application in the manufacturing of illicit substances, it is listed in the Table II precursor under the United Nations Convention Against Illicit Traffic in Narcotic Drugs and Psychotropic Substances.[7] 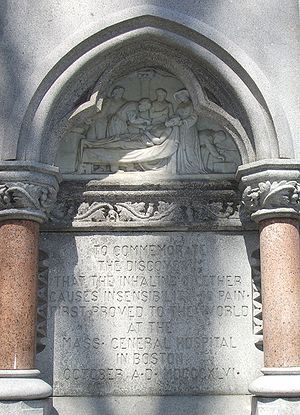 Panel from monument in Boston commemorating Morton's demonstration of ether's anesthetic use.

William T.G. Morton participated in a public demonstration of ether anesthesia on October 16, 1846 at the Ether Dome in Boston, Massachusetts. However, Crawford Williamson Long, M.D., is now known to have demonstrated its use privately as a general anesthetic in surgery to officials in Georgia, as early as March 30, 1842, and Long publicly demonstrated ether's use as a surgical anesthetic on numerous occasions before 1846.[8] British doctors were aware of the anesthetic properties of ether as early as 1840 where it was widely prescribed in conjunction with opium.[9]

Diethyl ether was formerly sometimes used in place of chloroform because it had a higher therapeutic index, a larger difference between the recommended dosage and a toxic overdose.[10] Because of its associations with Boston, the use of ether became known as the "Yankee Dodge."

Diethyl ether could also be mixed with other anesthetic agents such as chloroform to make C.E. mixture, or chloroform and alcohol to make A.C.E. mixture.

Today, ether is rarely used. The use of flammable ether was displaced by nonflammable anesthetics such as halothane. Diethyl ether was found to have many undesirable side effects, such as post-anesthetic nausea and vomiting. Modern anesthetic agents, such as methyl propyl ether (Neothyl) and methoxyflurane (Penthrane) reduce these side effects.[8]

It was once used in pharmaceuticals. A formulation of alcohol and mixture was known as "Spirit of ether" or Hoffman's drop. In the United States, it was removed from Pharmacopoeia prior to June 1917.[12]

The anesthetic effects of ether have made it a recreational drug, although not a popular one.[according to whom?]

Ether, mixed with ethanol, was marketed in the 19th century as a cure-all and recreational drug[citation needed], during one of Western society's temperance movements. At the time, it was considered improper for women to consume alcoholic beverages at social functions, and sometimes ether-containing drugs would be consumed instead.[citation needed]

In the 19th century and early 20th century ether drinking was popular among Polish peasants.[13] It is a traditional and still relatively popular recreational drug among Lemkos.[14] It is usually consumed in a small quantity (kropka, or "dot") poured over milk, water with sugar or orange juice in a shot glass.

A cytochrome P450 enzyme is proposed to metabolize diethyl ether.[15]

Diethyl ether can be prepared both in laboratories and on an industrial scale by the acid ether synthesis. Ethanol is mixed with a strong acid, typically sulfuric acid, H2SO4. The acid dissociates in the aqueous environment producing hydronium ions, H3O+. A hydrogen ion protonates the electronegative oxygen atom of the ethanol, giving the ethanol molecule a positive charge:

This reaction must be carried out at temperatures lower than 150 °C in order to ensure that an elimination product (ethylene) is not a product of the reaction. At higher temperatures, ethanol will dehydrate to form ethylene. The reaction to make diethyl ether is reversible, so eventually an equilibrium between reactants and products is achieved. Getting a good yield of ether requires that ether be distilled out of the reaction mixture before it reverts to ethanol, taking advantage of Le Chatelier's principle.

Another reaction that can be used for the preparation of ethers is the Williamson ether synthesis, in which an alkoxide (produced by dissolving an alkali metal in the alcohol to be used) performs a nucleophilic substitution upon an alkyl halide.

Diethyl ether is susceptible to peroxide formation, and can form explosive diethyl ether peroxide. Ether peroxides are higher boiling and are contact explosives when dry. Diethyl ether is typically supplied with trace amounts of the antioxidant butylated hydroxytoluene (BHT), which reduces the formation of peroxides. Storage over sodium hydroxide precipitates the intermediate ether hydroperoxides. Water and peroxides can be removed by either distillation from sodium and benzophenone, or by passing through a column of activated alumina.[19]

Diethyl ether is extremely flammable. The autoignition temperature of diethyl ether is 160 °C (320 °F), therefore it can be ignited by a hot surface without a flame or spark. A common practice in chemical labs is to use steam (thus limiting the temperature to 100 °C (212 °F) when ether must be heated or distilled). The diffusion of diethyl ether in air is 0.918·10−5 m2/s (298K, 101.325 kPa)[citation needed].