The cerebral cortex' is a sheet of neural tissue that is outermost to the cerebrum of the mammalian brain. It plays a key role in memory, attention, perceptual awareness, thought, language, and consciousness. It is constituted of up to six horizontal layers, each of which has a different composition in terms of neurons and connectivity. The human cerebral cortex is 2–4 mm (0.08–0.16 inches) thick.[1]

In preserved brains, it has a gray color, hence the name "gray matter". In contrast to gray matter that is formed from neurons and their unmyelinated fibers, the white matter below them is formed predominantly by myelinated axons interconnecting neurons in different regions of the cerebral cortex with each other and neurons in other parts of the central nervous system.

The surface of the cerebral cortex is folded in large mammals, such that more than two-thirds of it in the human brain is buried in the grooves, called "sulci". The phylogenetically most recent part of the cerebral cortex, the neocortex (also called isocortex), is differentiated into six horizontal layers; the more ancient part of the cerebral cortex, the hippocampus (also called archicortex), has at most three cellular layers, and is divided into subfields. Neurons in various layers connect vertically to form small microcircuits, called columns. Different neocortical architectonic fields are distinguished upon variations in the thickness of these layers, their predominant cell type and other factors such as neurochemical markers.

The layered structure of the mature cerebral cortex is formed during development. The first pyramidal neurons generated migrate out of the ventricular zone and subventricular zone, together with Cajal-Retzius cells from the preplate. Next, a cohort of neurons migrating into the middle of the preplate divides this transient layer into the superficial marginal zone, which will become layer one of the mature neocortex, and the subplate, forming a middle layer called the cortical plate. These cells will form the deep layers of the mature cortex, layers five and six. Later born neurons migrate radially into the cortical plate past the deep layer neurons, and become the upper layers (two to four). Thus, the layers of the cortex are created in an inside-out order. The only exception to this inside-out sequence of neurogenesis occurs in the layer I of primates, in which, contrary to rodents, neurogenesis continues throughout the entire period of corticogenesis.[4]

The cerebral cortex is derived from the pallium, a layered structure found in the forebrains of all vertebrates. The basic form of the pallium is a cylindrical layer enclosing fluid-filled ventricles. Around the circumference of the cylinder are four zones, the dorsal pallium, medial pallium, ventral pallium, and lateral pallium, which are thought respectively to give rise to the neocortex, hippocampus, amygdala, and olfactory cortex.

Until recently, no counterpart to the cerebral cortex had been recognized in invertebrates. However, a study published in the journal Cell in 2010, based on gene expression profiles, reported strong affinities between the cerebral cortex and the mushroom bodies of ragworms.[5] Mushroom bodies are structures in the brains of many types of worms and arthropods that are known to play important roles in learning and memory; the genetic evidence indicates a common evolutionary origin, and therefore indicates that the origins of the earliest precursors of the cerebral cortex date back to the early Precambrian era.

Three drawings of cortical lamination by Santiago Ramon y Cajal, each showing a vertical cross-section, with the surface of the cortex at the top. Left: Nissl-stained visual cortex of a human adult. Middle: Nissl-stained motor cortex of a human adult. Right: Golgi-stained cortex of a 1½ month old infant. The Nissl stain shows the cell bodies of neurons; the Golgi stain shows the dendrites and axons of a random subset of neurons. 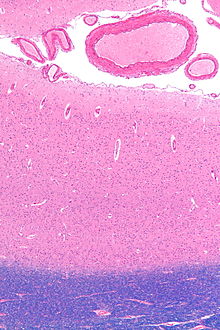 The different cortical layers each contain a characteristic distribution of neuronal cell types and connections with other cortical and subcortical regions. One of the clearest examples of cortical layering is the Stria of Gennari in the primary visual cortex. This is a band of whiter tissue that can be observed with the naked eye in the fundus of the calcarine sulcus of the occipital lobe. The Stria of Gennari is composed of axons bringing visual information from the thalamus into layer four of visual cortex.

Staining cross-sections of the cortex to reveal the position of neuronal cell bodies and the intracortical axon tracts allowed neuroanatomists in the early 20th century to produce a detailed description of the laminar structure of the cortex in different species. After the work of Korbinian Brodmann (1909), the neurons of the cerebral cortex are grouped into six main layers, from outside (pial surface) to inside (white matter):

It is important to note that the cortical layers are not simply stacked one over the other; there exist characteristic connections between different layers and neuronal types, which span all the thickness of the cortex. These cortical microcircuits are grouped into cortical columns and minicolumns, the latter of which have been proposed to be the basic functional units of cortex.[13] In 1957, Vernon Mountcastle showed that the functional properties of the cortex change abruptly between laterally adjacent points; however, they are continuous in the direction perpendicular to the surface. Later works have provided evidence of the presence of functionally distinct cortical columns in the visual cortex (Hubel and Wiesel, 1959),[14] auditory cortex and associative cortex.

The cerebral cortex is connected to various subcortical structures such as the thalamus and the basal ganglia, sending information to them along efferent connections and receiving information from them via afferent connections. Most sensory information is routed to the cerebral cortex via the thalamus. Olfactory information, however, passes through the olfactory bulb to the olfactory cortex (piriform cortex). The vast majority of connections are from one area of the cortex to another rather than to subcortical areas; Braitenberg and Schüz (1991) put the figure as high as 99%.[17]

The sensory areas are the areas that receive and process information from the senses. Parts of the cortex that receive sensory inputs from the thalamus are called primary sensory areas. The senses of vision, audition, and touch are served by the primary visual cortex, primary auditory cortex and primary somatosensory cortex. In general, the two hemispheres receive information from the opposite (contralateral) side of the body. For example the right primary somatosensory cortex receives information from the left limbs, and the right visual cortex receives information from the left visual field. The organization of sensory maps in the cortex reflects that of the corresponding sensing organ, in what is known as a topographic map. Neighboring points in the primary visual cortex, for example, correspond to neighboring points in the retina. This topographic map is called a retinotopic map. In the same way, there exists a tonotopic map in the primary auditory cortex and a somatotopic map in the primary sensory cortex. This last topographic map of the body onto the posterior central gyrus has been illustrated as a deformed human representation, the somatosensory homunculus, where the size of different body parts reflects the relative density of their innervation. Areas with lots of sensory innervation, such as the fingertips and the lips, require more cortical area to process finer sensation.

The motor areas are located in both hemispheres of the cortex. They are shaped like a pair of headphones stretching from ear to ear. The motor areas are very closely related to the control of voluntary movements, especially fine fragmented movements performed by the hand. The right half of the motor area controls the left side of the body, and vice versa.

Two areas of the cortex are commonly referred to as motor:

In addition, motor functions have been described for:

Buried deep in the white matter of the cerebral cortex are interconnected subcortical masses of cerebral gray matter called basal nuclei. The basal nuclei receive input from the substantia nigra of the midbrain and motor areas of the cerebral cortex, and send signals back to both of these locations. They are involved in motor control. They are found lateral to the thalamus. They are often called basal ganglia, but the word ganglion is best restricted to clusters of neurons outside the Central Nervous System (CNS). Most neuroanatomists disagree on how many brain centers to classify basal nuclei, but agree on at least three: the caudate nucleus, putamen, and globus pallidus. The putamen and globus pallidus are also collectively known as the lentiform nucleus, because together they form a lens-shaped body. The putamen and caudate nucleus are also collectively called the corpus striatum after their striped appearance.[18][19]

Association areas function to produce a meaningful perceptual experience of the world, enable us to interact effectively, and support abstract thinking and language. The parietal, temporal, and occipital lobes - all located in the posterior part of the cortex - organize sensory information into a coherent perceptual model of our environment centered on our body image. The frontal lobe or prefrontal association complex is involved in planning actions and movement, as well as abstract thought. In the past it was theorized that language abilities are localized in the left hemisphere in areas 44/45, the Broca's area, for language expression and area 22, the Wernicke's area, for language reception. However, language is no longer limited to easily identifiable areas. More recent research suggests that the processes of language expression and reception occur in areas other than just the perisylvian structures, such as the prefrontal lobe, basal ganglia, cerebellum, pons, caudate nucleus, and others. [20]

Based on the differences in lamination the cerebral cortex can be classified into two major groups:

Based on supposed developmental differences the following classification also appears:

In addition, cortex may be classified on the basis of gross topographical conventions into four lobes: the Temporal lobe, Occipital lobe, Parietal lobe and Frontal lobe: 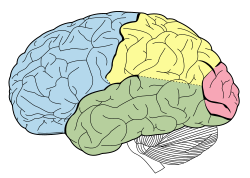 For mammals, species with larger brains (in absolute terms, not just in relation to body size) tend to have thicker cortices.[21] The range, however, is not very great — only a factor of 7 between the thickest and thinnest cortices. The smallest mammals, such as shrews, have a neocortical thickness of about 0.5 mm; the ones with the largest brains, such as humans and fin whales, have thicknesses of 2.3—2.8 mm. There is an approximately logarithmic relationship between brain weight and cortical thickness; dolphins, however, have considerably thinner cortices than the overall relationship would predict.[21]