The Hypothalamus (from Greek ὑπό = under and θάλαμος = room, chamber) is a portion of the brain that contains a number of small nuclei with a variety of functions. One of the most important functions of the hypothalamus is to link the nervous system to the endocrine system via the pituitary gland (hypophysis).

The hypothalamus is located below the thalamus, just above the brain stem. In the terminology of neuroanatomy, it forms the ventral part of the diencephalon. All vertebrate brains contain a hypothalamus. In humans, it is roughly the size of an almond.

The hypothalamus is responsible for certain metabolic processes and other activities of the autonomic nervous system. It synthesizes and secretes certain neurohormones, often called hypothalamic-releasing hormones, and these in turn stimulate or inhibit the secretion of pituitary hormones. The hypothalamus controls body temperature, hunger, thirst,[1] fatigue, sleep, and circadian cycles.

The hypothalamus is a brain structure composed of distinct nuclei and less anatomically distinct areas. It is found in all vertebrate nervous systems. In mammals, the axons of magnocellular neurosecretory cells of the paraventricular nucleus and the supraoptic nucleus, which contain oxytocin and vasopressin (also called antidiuretic hormone), comprise the posterior pituitary. Parvocellular neurons of the paraventricular nucleus contain neurons that release corticotropin-releasing hormone and other hormones into the hypophyseal portal system where these hormones diffuse to the anterior pituitary.

The hypothalamus coordinates many hormonal and behavioural circadian rhythms, complex patterns of neuroendocrine outputs, complex homeostatic mechanisms,[2] and important behaviours. The hypothalamus must therefore respond to many different signals, some of which are generated externally and some internally. The hypothalamus is thus richly connected with many parts of the central nervous system, including the brainstem reticular formation and autonomic zones, the limbic forebrain (particularly the amygdala, septum, diagonal band of Broca, and the olfactory bulbs, and the cerebral cortex).Several nuclei have been identified in the hypothalamus. Some have become associated with specific physiological activities, while the functions of others are less clear and in some cases unknown. Their relative locations are illustrated in midsagittal section in Fig-1 and 2. Therefore it is important to recognize that you are seeing the nuclei on the right side of the third ventricle only. In other words, each of the nuclei is paired. The nuclei are often grouped in four general areas. The preoptic area includes the medial and lateral preoptic nuclei, which extend through the lamina terminalis. The supraoptic area includes the supraoptic, anterior hypothalamic, and paraventricular nuclei. The tuberal area include the lateral hypothalamic, posterior hypothalamic, dorsomedial, and ventromedial nuclei. Finally, the mammillary area is composed of the medial and lateral mammillary nuclei. [1]

The hypothalamus is responsive to:

Olfactory stimuli are important for sex and neuroendocrine function in many species. For instance if a pregnant mouse is exposed to the urine of a 'strange' male during a critical period after coitus then the pregnancy fails (the Bruce effect). Thus during coitus, a female mouse forms a precise 'olfactory memory' of her partner which persists for several days. Pheromonal cues aid synchronisation of oestrus in many species; in women, synchronised menstruation may also arise from pheromonal cues, although the role of pheromones in humans is doubted by many[who?].

Peptide hormones have important influences upon the hypothalamus, and to do so they must evade the blood-brain barrier. The hypothalamus is bounded in part by specialized brain regions that lack an effective blood-brain barrier; the capillary endothelium at these sites is fenestrated to allow free passage of even large proteins and other molecules. Some of these sites are the sites of neurosecretion - the neurohypophysis and the median eminence. However others are sites at which the brain samples the composition of the blood. Two of these sites, the SFO (subfornical organ) and the OVLT (organum vasculosum of the lamina terminalis) are so-called circumventricular organs, where neurons are in intimate contact with both blood and CSF. These structures are densely vascularized, and contain osmoreceptive and sodium-receptive neurons which control drinking, vasopressin release, sodium excretion, and sodium appetite. They also contain neurons with receptors for angiotensin, atrial natriuretic factor, endothelin and relaxin, each of which is important in the regulation of fluid and electrolyte balance. Neurons in the OVLT and SFO project to the supraoptic nucleus and paraventricular nucleus, and also to preoptic hypothalamic areas. The circumventricular organs may also be the site of action of interleukins to elicit both fever and ACTH secretion, via effects on paraventricular neurons.

It is not clear how all peptides that influence hypothalamic activity gain the necessary access. In the case of prolactin and leptin, there is evidence of active uptake at the choroid plexus from blood into CSF. Some pituitary hormones have a negative feedback influence upon hypothalamic secretion; for example, growth hormone feeds back on the hypothalamus, but how it enters the brain is not clear. There is also evidence for central actions of prolactin.

The hypothalamus receives many inputs from the brainstem; notably from the nucleus of the solitary tract, the locus coeruleus, and the ventrolateral medulla. Oxytocin secretion in response to suckling or vagino-cervical stimulation is mediated by some of these pathways; vasopressin secretion in response to cardiovascular stimuli arising from chemoreceptors in the carotid body and aortic arch, and from low-pressure atrial volume receptors, is mediated by others. In the rat, stimulation of the vagina also causes prolactin secretion, and this results in pseudo-pregnancy following an infertile mating. In the rabbit, coitus elicits reflex ovulation. In the sheep, cervical stimulation in the presence of high levels of estrogen can induce maternal behavior in a virgin ewe. These effects are all mediated by the hypothalamus, and the information is carried mainly by spinal pathways that relay in the brainstem. Stimulation of the nipples stimulates release of oxytocin and prolactin and suppresses the release of LH and FSH.

Cardiovascular stimuli are carried by the vagus nerve, but the vagus also conveys a variety of visceral information, including for instance signals arising from gastric distension to suppress feeding. Again this information reaches the hypothalamus via relays in the brainstem.

In addition hypothalamic function is responsive to --and regulated by-- levels of all three classical monoamine neurotransmitters, i.e. noradrenaline, dopamine and 5-hydroxytryptamine (serotonin), in those tracts from which it receives enervation. For example noradrenergic inputs arising from the locus coeruleus have important regulatory effects upon CRH levels. 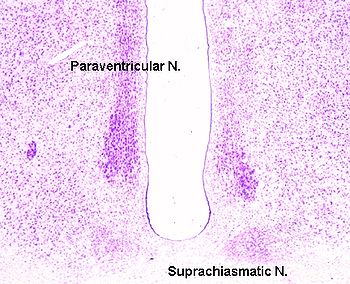 The hypothalamic nuclei include the following:[5][6][7] 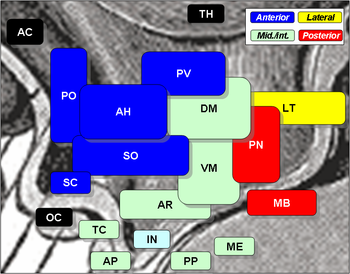 Hypothalamic nuclei on one side of the hypothalamus, shown in a 3-D computer reconstruction: [?? - citation not only needed, but desired]. 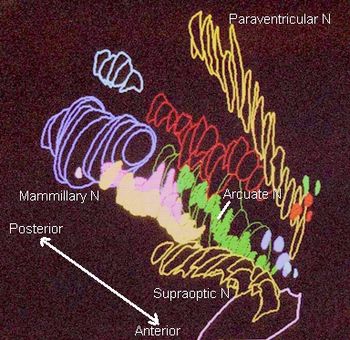 Hypothalamic nuclei on one side of the hypothalamus, shown in a 3-D computer reconstruction

The outputs of the hypothalamus can be divided into two categories: neural projections, and endocrine hormones.[10]

Most fiber systems of the hypothalamus run in two ways (bidirectional).

The hypothalamus affects the endocrine system and governs emotional behavior, such as anger and sexual activity. Most of the hypothalamic hormones generated are distributed to the pituitary via the hypophyseal portal system.[11] The hypothalamus maintains homeostasis; this includes a regulation of blood pressure, heart rate, and temperature.

There are different hypotheses related to this regulation:[12]

Several hypothalamic nuclei are sexually dimorphic, i.e. there are clear differences in both structure and function between males and females.

Some differences are apparent even in gross neuroanatomy: most notable is the sexually dimorphic nucleus within the preoptic area, which is present only in males. However most of the differences are subtle changes in the connectivity and chemical sensitivity of particular sets of neurons.

The importance of these changes can be recognised by functional differences between males and females. For instance, males of most species prefer the odor and appearance of females over males, which is instrumental in stimulating male sexual behavior. If the sexually dimorphic nucleus is lesioned, this preference for females by males diminishes. Also, the pattern of secretion of growth hormone is sexually dimorphic, and this is one reason why in many species, adult males are much larger than females.

Other striking functional dimorphisms are in the behavioral responses to ovarian steroids of the adult. Males and females respond differently to ovarian steroids, partly because the expression of estrogen-sensitive neurons in the hypothalamus is sexually dimorphic, i.e. estrogen receptors are expressed in different sets of neurons.

Estrogen and progesterone can influence gene expression in particular neurons or induce changes in cell membrane potential and kinase activation, leading to diverse non-genomic cellular functions. Estrogen and progesterone bind to their cognate nuclear hormone receptors, which translocate to the cell nucleus and interact with regions of DNA known as hormone response elements (HREs) or get tethered to another transcription factor's binding site. Estrogen receptor (ER) has been shown to transactivate other transcription factors in this manner, despite the absence of an estrogen response element (ERE) in the proximal promoter region of the gene. ERs and progesterone receptors (PRs) are generally gene activators, with increased mRNA and subsequent protein synthesis following hormone exposure.

Male and female brains differ in the distribution of estrogen receptors, and this difference is an irreversible consequence of neonatal steroid exposure. Estrogen receptors (and progesterone receptors) are found mainly in neurons in the anterior and mediobasal hypothalamus, notably:

In neonatal life, gonadal steroids influence the development of the neuroendocrine hypothalamus. For instance, they determine the ability of females to exhibit a normal reproductive cycle, and of males and females to display appropriate reproductive behaviors in adult life.

In primates, the developmental influence of androgens is less clear, and the consequences are less understood. Within the brain, testosterone is aromatized to (estradiol), which is the principal active hormone for developmental influences. The human testis secretes high levels of testosterone from about week 8 of fetal life until 5–6 months after birth (a similar perinatal surge in testosterone is observed in many species), a process that appears to underlie the male phenotype. Estrogen from the maternal circulation is relatively ineffective, partly because of the high circulating levels of steroid-binding proteins in pregnancy.

Human sexual orientation and the hypothalamus

Swaab first reported on the relationship between sexual orientation in males and the hypothalamus's "clock", the suprachiasmatic nucleus (SCN). In 1990, Swaab and Hofman[14] reported that the SCN of heterosexual men was significantly larger than in women, and the SCN of homosexual men was significantly less than in heterosexual men. Then in 1995, Swaab et al.[15] linked brain development to sexual orientation by treating male rats both pre- and postnatally with ATD, an aromatase blocker in the brain. This produced an enlarged SCN and bisexual behavior in the adult male rats. In 1991, LeVay showed that part of the sexually dimorphic nucleus (SDN), the interstitial nuclei of the anterior hypothalamus (INAH) 3, is twice as large in heterosexual men as and homosexual women, in terms of volume but not number of neurons.

Other influences upon hypothalamic development

Sex steroids are not the only important influences upon hypothalamic development; in particular, pre-pubertal stress in early life (of rats) determines the capacity of the adult hypothalamus to respond to an acute stressor.[18] Unlike gonadal steroid receptors, glucocorticoid receptors are very widespread throughout the brain; in the paraventricular nucleus, they mediate negative feedback control of CRF synthesis and secretion, but elsewhere their role is not well understood.

de Vries, GJ, and Sodersten P (2009) Sex differences in the brain: the relation between structure and function. Hormones and Behavior 55:589-596.