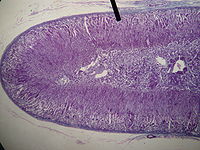 Cortical part of the adrenal gland (on the pointer).

Situated along the perimeter of the adrenal gland, the adrenal cortex mediates the stress response through the production of mineralocorticoids and glucocorticoids, including aldosterone and cortisol respectively. It is also a secondary site of androgen synthesis.

Notably, the reticularis in all animals is not always easily distinguishable and dedicated to androgen synthesis. In rodents, for instance, the reticularis also generates corticosteroids (specifically corticosterone, not cortisol). The two layers are collectively referred to as the fasciculo-reticularis. Female rodents also exhibit another cortical layer called the "X zone" whose function is not yet clear.

All adrenocortical hormones are synthesized from cholesterol. Cholesterol is transported into the adrenal gland. The steps up to this point occur in many steroid-producing tissues. Subsequent steps to generate aldosterone and cortisol, however, primarily occur in the adrenal cortex:

The adrenal cortex produces a number of different corticosteroid hormones.

They are produced in the zona fasciculata. The primary glucocorticoid released by the adrenal gland in the human is cortisol and corticosterone in many other animals. Its secretion is regulated by the hormone ACTH from the anterior pituitary. Upon binding to its target, cortisol enhances metabolism in several ways:

They are produced in the zona reticularis. The most important androgens include: