Androgen, also called androgenic hormone or testoid, is the generic term for any natural or synthetic compound, usually a steroid hormone, that stimulates or controls the development and maintenance of male characteristics in vertebrates by binding to androgen receptors. This includes the activity of the accessory male sex organs and development of male secondary sex characteristics. Androgens were first discovered in 1936. Androgens are also the original anabolic steroids and the precursor of all estrogens, the female sex hormones. The primary and most well-known androgen is testosterone, other less important androgens are dihydrotestosterone and androstenedione. 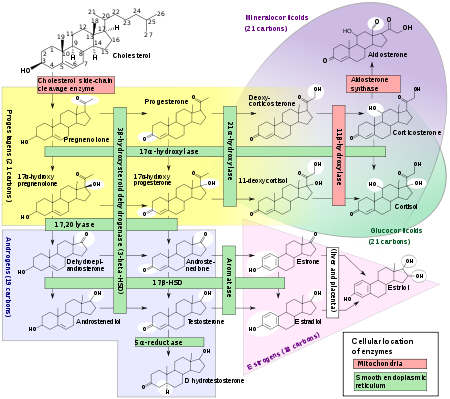 Steroidogenesis, showing the relation between several androgens at bottom left. Estrone and estradiol, in contrast, are estrogens.

Besides testosterone, other androgens include:

Development of the male

During mammalian development, the gonads are at first capable of becoming either ovaries or testes.[1] In humans, starting at about week 4 the gonadal rudiments are present within the intermediate mesoderm adjacent to the developing kidneys. At about week 6, epithelial sex cords develop within the forming testes and incorporate the germ cells as they migrate into the gonads. In males, certain Y chromosome genes, particularly SRY, control development of the male phenotype, including conversion of the early bipotential gonad into testes. In males, the sex cords fully invade the developing gonads.

The mesoderm-derived epithelial cells of the sex cords in developing testes become the Sertoli cells which will function to support sperm cell formation. A minor population of non-epithelial cells appear between the tubules by week 8 of human fetal development. These are Leydig cells. Soon after they differentiate, Leydig cells begin to produce androgens.

The androgens function as paracrine hormones required by the Sertoli cells in order to support sperm production. They are also required for masculinization of the developing male fetus (including penis and scrotum formation). Under the influence of androgens, remnants of the mesonephron, the Wolffian ducts, develop into the epididymis, vas deferens and seminal vesicles. This action of androgens is supported by a hormone from Sertoli cells, MIH (Müllerian inhibitory hormone), which prevents the embryonic Müllerian ducts from developing into fallopian tubes and other female reproductive tract tissues in male embryos. MIH and androgens cooperate to allow for the normal movement of testes into the scrotum.

Before the production of the pituitary hormone luteinizing hormone (LH) by the embryo starting at about weeks 11–12, human chorionic gonadotrophin (hCG) promotes the differentiation of Leydig cells and their production of androgens at week 8. Androgen action in target tissues often involves conversion of testosterone to 5α-dihydrotestosterone (DHT).

During puberty, androgen, LH and FSH production increase and the sex cords hollow out, forming the seminiferous tubules, and the germ cells start to differentiate into sperm. Throughout adulthood, androgens and FSH cooperatively act on Sertoli cells in the testes to support sperm production.[2] Exogenous androgen supplements can be used as a male contraceptive. Elevated androgen levels caused by use of androgen supplements can inhibit production of LH and block production of endogenous androgens by Leydig cells. Without the locally high levels of androgens in testes due to androgen production by Leydig cells, the seminiferous tubules can degenerate resulting in infertility. For this reason, many transdermal androgen patches are applied to the scrotum.

Males typically have less body fat than females. Recent results indicate that androgens inhibit the ability of some fat cells to store lipids by blocking a signal transduction pathway that normally supports adipocyte function.[3] Also, androgens, but not estrogens, increase beta adrenergic receptors while decreasing alpha adrenergic receptors- which results in increased levels of epinephrine/ norepinephrine due to lack of alpha-2 receptor negative feedback and decreased fat accumulation due to epinephrine/ norepinephrine then acting on lipolysis-inducing beta receptors.

Males typically have more skeletal muscle mass than females. Androgens promote the enlargement of skeletal muscle cells and probably act in a coordinated manner to function by acting on several cell types in skeletal muscle tissue.[4] One type of cell that conveys hormone signals to generating muscle is the myoblast. Higher androgen levels lead to increased expression of androgen receptor. Fusion of myoblasts generates myotubes, in a process that is linked to androgen receptor levels.[5]

Insensitivity to androgen in humans

Reduced ability of a XY karyotype fetus to respond to androgens can result in one of several conditions, including infertility and several forms of intersex conditions.