Gluconeogenesis
Not to be confused with Glycogenesis or Glyceroneogenesis.

Gluconeogenesis pathway with key molecules and enzymes. Many steps are the opposite of those found in the glycolysis.

Gluconeogenesis (abbreviated GNG) is a metabolic pathway that results in the generation of glucose from non-carbohydrate carbon substrates such as lactate, glycerol, and glucogenic amino acids.

Gluconeogenesis is a ubiquitous process, present in plants, animals, fungi, bacteria, and other microorganisms.[2] In animals, gluconeogenesis takes place mainly in the liver and, to a lesser extent, in the cortex of kidneys. This process occurs during periods of fasting, starvation, low-carbohydrate diets, or intense exercise and is highly endergonic. For example, the pathway leading from pyruvate to glucose-6-phosphate requires 4 molecules of ATP and 2 molecules of GTP. Gluconeogenesis is often associated with ketosis. Gluconeogenesis is also a target of therapy for type II diabetes, such as metformin, which inhibits glucose formation and stimulates glucose uptake by cells.[3]

Lactate is transported back to the liver where it is converted into pyruvate by the Cori cycle using the enzyme lactate dehydrogenase. Pyruvate, the first designated substrate of the gluconeogenic pathway, can then be used to generate glucose.[4] 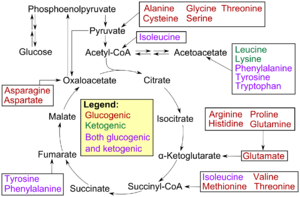 Catabolism of proteinogenic amino acids. Amino acids are classified according the abilities of their products to enter gluconeogenesis:[5]

All citric acid cycle intermediates, through conversion to oxaloacetate, amino acids other than lysine or leucine, and glycerol can also function as substrates for gluconeogenesis.[4] Transamination or deamination of amino acids facilitates entering of their carbon skeleton into the cycle directly (as pyruvate or oxaloacetate), or indirectly via the citric acid cycle.

Whether fatty acids can be converted into glucose in animals has been a longstanding question in biochemistry.[6] It is known that odd-chain fatty acids can be oxidized to yield propionyl CoA, a precursor for succinyl CoA, which can be converted to pyruvate and enter into gluconeogenesis. In plants, specifically seedlings, the glyoxylate cycle can be used to convert fatty acids (acetate) into the primary carbon source of the organism. The glyoxylate cycle produces four-carbon dicarboxylic acids that can enter gluconeogenesis.[4]

In 1995, researchers identified the glyoxylate cycle in nematodes.[7] In addition, the glyoxylate enzymes malate synthase and isocitrate lyase have been found in animal tissues.[8] Genes coding for malate synthase gene have been identified in other [metazoans] including arthropods, echinoderms, and even some vertebrates. Mammals found to possess these genes include monotremes (platypus) and marsupials (opossum) but not placental mammals. Genes for isocitrate lyase are found only in nematodes, in which, it is apparent, they originated in horizontal gene transfer from bacteria.

The existence of glyoxylate cycles in humans has not been established, and it is widely held that fatty acids cannot be converted to glucose in humans directly. However, carbon-14 has been shown to end up in glucose when it is supplied in fatty acids.[9] Despite these findings, it is considered unlikely that the 2-carbon acetyl-CoA derived from the oxidation of fatty acids would produce a net yield of glucose via the citric acid cycle.[6]

Glycerol, which is a part of the triacylglycerol molecule, can be used in gluconeogenesis.

In humans, gluconeogenesis is restricted to the liver and to a lesser extent the kidney.[10]

In all species, the formation of oxaloacetate from pyruvate and TCA cycle intermediates is restricted to the mitochondrion, and the enzymes that convert PEP to glucose are found in the cytosol.[11] The location of the enzyme that links these two parts of gluconeogenesis by converting oxaloacetate to PEP, PEP carboxykinase, is variable by species: it can be found entirely within the mitochondria, entirely within the cytosol, or dispersed evenly between the two, as it is in humans.[11] Transport of PEP across the mitochondrial membrane is accomplished by dedicated transport proteins; however no such proteins exist for oxaloacetate.[11] Therefore species that lack intra-mitochondrial PEP, oxaloacetate must be converted into malate or asparate, exported from the mitochondrion, and converted back into oxaloacetate in order to allow gluconeogenesis to continue.[11]

Gluconeogenesis is a pathway consisting of eleven enzyme-catalyzed reactions. The pathway can begin in the mitochondria or cytoplasm, depending on the substrate being used. Many of the reactions are the reversible steps found in glycolysis.

While most steps in gluconeogenesis are the reverse of those found in glycolysis, three regulated and strongly exergonic reactions are replaced with more kinetically favorable reactions. Hexokinase/glucokinase, phosphofructokinase, and pyruvate kinase enzymes of glycolysis are replaced with glucose-6-phosphatase, fructose-1,6-bisphosphatase, and PEP carboxykinase. This system of reciprocal control allow glycolysis and gluconeogenesis to inhibit each other and prevent the formation of a futile cycle.

The majority of the enzymes responsible for gluconeogenesis are found in the cytoplasm; the exceptions are mitochondrial pyruvate carboxylase and, in animals, phosphoenolpyruvate carboxykinase. The latter exists as an isozyme located in both the mitochondrion and the cytosol.[12] The rate of gluconeogenesis is ultimately controlled by the action of a key enzyme, fructose-1,6-bisphosphatase, which is also regulated through signal transduction by cAMP and its phosphorylation.