The urea cycle (also known as the ornithine cycle) is a cycle of biochemical reactions occurring in many animals that produces urea ((NH2)2CO) from ammonia (NH3). This cycle was the first metabolic cycle discovered (Hans Krebs and Kurt Henseleit, 1932), five years before the discovery of the TCA cycle. In mammals, the urea cycle takes place primarily in the liver, and to a lesser extent in the kidney.

Organisms that cannot easily and quickly remove ammonia usually have to convert it to some other substance, like urea or uric acid, which are much less toxic. Insufficiency of the urea cycle occurs in some genetic disorders (inborn errors of metabolism), and in liver failure. The result of liver failure is accumulation of nitrogenous waste, mainly ammonia, which leads to hepatic encephalopathy.

The urea cycle consists of five reactions: two mitochondrial and three cytosolic. The cycle converts two amino groups, one from NH4+ and one from Asp, and a carbon atom from HCO3−, to the relatively nontoxic excretion product urea at the cost of four "high-energy" phosphate bonds (3 ATP hydrolyzed to 2 ADP and one AMP). Ornithine is the carrier of these carbon and nitrogen atoms.

The reactions of the urea cycle 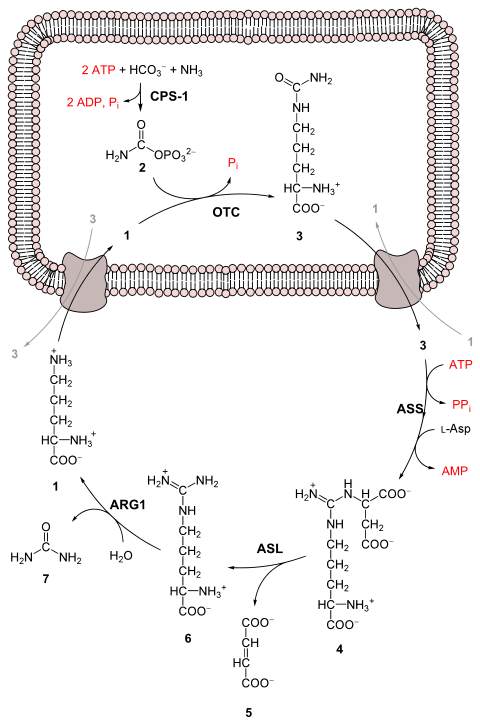 Thus, the overall equation of the urea cycle is:

Since fumarate is obtained by removing NH3 from aspartate (by means of reactions 3 and 4), and PPi + H2O → 2 Pi, the equation can be simplified as follows:

Note that reactions related to the urea cycle also cause the oxidation of 2 NADH, so the urea cycle releases slightly more energy than it consumes. These NADH are produced in two ways:

The two NADH produced can provide energy for the formation of 5 ATP, a net production of one high-energy phosphate bond for the urea cycle. However, if gluconeogenesis is underway in the cytosol, the latter reducing equivalent is used to drive the reversal of the GAPDH step instead of generating ATP.

The fate of oxaloacetate is either to produce aspartate via transamination or to be converted to phosphoenol pyruvate, which is a substrate to glucose.

The synthesis of carbamoyl phosphate and the urea cycle are dependent on the presence of NAcGlu, which allosterically activates CPS1. Synthesis of NAcGlu by NAGS, is stimulated by both Arg, allosteric stimulator of NAGS, and Glu, a product in the transamination reactions and one of NAGS's substrates, both of which are elevated when free amino acids are elevated. So, Arg is not only a substrate for the urea cycle reactions but also serves as an activator for the urea cycle.

The remaining enzymes of the cycle are controlled by the concentrations of their substrates. Thus, inherited deficiencies in the cycle enzymes other than ARG1 do not result in significant decrease in urea production (the total lack of any cycle enzyme results in death shortly after birth). Rather, the deficient enzyme's substrate builds up, increasing the rate of the deficient reaction to normal.

The anomalous substrate buildup is not without cost, however. The substrate concentrations become elevated all the way back up the cycle to NH4+, resulting in hyperammonemia (elevated [NH4+]P).

Although the root cause of NH4+ toxicity is not completely understood, a high [NH4+] puts an enormous strain on the NH4+-clearing system, especially in the brain (symptoms of urea cycle enzyme deficiencies include mental retardation and lethargy). This clearing system involves GLUD1 and GLUL, which decrease the 2-oxoglutarate (2OG) and Glu pools. The brain is most sensitive to the depletion of these pools. Depletion of 2OG decreases the rate of TCAC, whereas Glu is both a neurotransmitter and a precursor to GABA, another neurotransmitter. [1](p.734)

Most of them are associated with hyperammonemia.