Arginine (abbreviated as Arg or R)[1] is an α-amino acid. The L-form is one of the 20 most common natural amino acids. At the level of molecular genetics, in the structure of the messenger ribonucleic acid mRNA, CGU, CGC, CGA, CGG, AGA, and AGG, are the triplets of nucleotide bases or codons that codify for arginine during protein synthesis. In mammals, arginine is classified as a semiessential or conditionally essential amino acid, depending on the developmental stage and health status of the individual.[2] Preterm infants are unable to synthesize or create arginine internally, making the amino acid nutritionally essential for them.[3] There are some conditions that put an increased demand on the body for the synthesis of L-arginine, including surgical or other trauma, sepsis and burns.[citation needed] Arginine was first isolated from a lupin seedling extract in 1886 by the Swiss chemist Ernst Schultze.

In general, most people do not need to take arginine supplements because the body usually produces enough.[4]

The amino acid side-chain of arginine consists of a 3-carbon aliphatic straight chain, the distal end of which is capped by a complex guanidinium group. 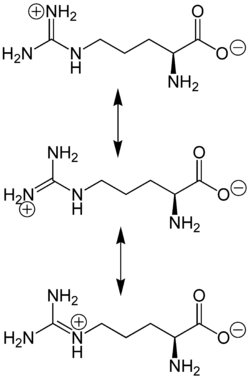 Delocalization of charge in guanidinium group of L-Arginine

With a pKa of 12.48, the guanidinium group is positively charged in neutral, acidic and even most basic environments, and thus imparts basic chemical properties to arginine. Because of the conjugation between the double bond and the nitrogen lone pairs, the positive charge is delocalized, enabling the formation of multiple H-bonds.

Arginine is a conditionally nonessential amino acid, meaning most of the time it can be manufactured by the human body, and does not need to be obtained directly through the diet. The biosynthetic pathway however does not produce sufficient arginine, and some must still be consumed through diet. Individuals who have poor nutrition or certain physical conditions may be advised to increase their intake of foods containing arginine. Arginine is found in a wide variety of foods, including[5]:

Citrulline can be derived from multiple sources:

The pathways linking arginine, glutamine, and proline are bidirectional. Thus, the net utilization or production of these amino acids is highly dependent on cell type and developmental stage.

On a whole-body basis, synthesis of arginine occurs principally via the intestinal–renal axis, wherein epithelial cells of the small intestine, which produce citrulline primarily from glutamine and glutamate, collaborate with the proximal tubule cells of the kidney, which extract citrulline from the circulation and convert it to arginine, which is returned to the circulation. As a consequence, impairment of small bowel or renal function can reduce endogenous arginine synthesis, thereby increasing the dietary requirement.

Synthesis of arginine from citrulline also occurs at a low level in many other cells, and cellular capacity for arginine synthesis can be markedly increased under circumstances that also induce iNOS. Thus, citrulline, a coproduct of the NOS-catalyzed reaction, can be recycled to arginine in a pathway known as the citrulline-NO or arginine-citrulline pathway. This is demonstrated by the fact that in many cell types, citrulline can substitute for arginine to some degree in supporting NO synthesis. However, recycling is not quantitative because citrulline accumulates along with nitrate and nitrite, the stable end-products of NO, in NO-producing cells.[6]

Arginine plays an important role in cell division, the healing of wounds, removing ammonia from the body, immune function, and the release of hormones.[2][7][8] Arginine taken in combination with proanthocyanidins[9] or yohimbine,[10] has also been used as a treatment for erectile dysfunction.

The benefits and functions attributed to oral supplementation of L-arginine include:

The distributing basics of the moderate structure found in geometry, charge distribution and ability to form multiple H-bonds make arginine ideal for binding negatively charged groups. For this reason, arginine prefers to be on the outside of the proteins where it can interact with the polar environment.

Incorporated in proteins, arginine can also be converted to citrulline by PAD enzymes. In addition, arginine can be methylated by protein methyltransferases.

Arginine is the immediate precursor of NO(Nitric Oxide), urea, ornithine, and agmatine; is necessary for the synthesis of creatine; and can also be used for the synthesis of polyamines (mainly through ornithine and to a lesser degree through agmatine), citrulline, and glutamate. As a precursor of nitric oxide, arginine may have a role in the treatment of some conditions where vasodilation is required.[2] The presence of asymmetric dimethylarginine (ADMA), a close relative, inhibits the nitric oxide reaction; therefore, ADMA is considered a marker for vascular disease, just as L-arginine is considered a sign of a healthy endothelium.

Arginine (8%) in dental products (e.g., toothpaste) provides effective relief from sensitive teeth by depositing a dentin-like mineral, containing calcium and phosphate, within the dentin tubules and in a protective layer on the dentin surface.[14]

An unproven claim is that a low ratio of arginine to lysine may be of benefit in the treatment of herpes simplex virus. For more information, refer to Herpes - Treatment also see journal article.[15]

A clinical trial found that patients taking an L-arginine supplement following a heart attack found no change in the heart's vascular tone or decrease in the symptoms of congestive heart failure (the heart's ability to pump). In fact, six more patients who were taking L-arginine died than those taking a placebo resulting in early termination of the study with the recommendation that the supplement not be used by heart attack patients.[16][17][18] These findings suggest L-arginine is not beneficial post-heart-attack.

The Mayo Clinic web page on L-arginine reports that inhalation of L-arginine can increase lung inflammation and worsen asthma.[19]

Several trials delved into effects of L-arginine in MELAS syndrome, a mitochondrial disease.[22][23][24][25]

Cellular arginine biosynthetic capacity determined by activity of argininosuccinate synthetase (AS) is induced by the same mediators of septic response — endotoxin and cytokines — that induce nitric oxide synthase (NOS), the enzyme responsible for nitric oxide synthesis.[26]

The malate salt of arginine can also be used during the treatment of alcoholic hepatitis and advanced cirrhosis.[27]

A preliminary study of supplementation with L-arginine and antioxidant vitamins showed that this combination may help to combat abnormally high blood pressure during high risk pregnancies.[28]