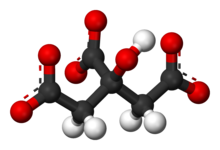 A citrate can refer either to the conjugate base of citric acid, (C3H5O(COO)33−), or to the esters of citric acid. An example of the former, a salt is trisodium citrate; an ester is triethyl citrate.

As a weak acid, citrate can be used as a component in buffer solutions, including the commonly used SSC 20X hybridization buffer.[1] This buffer uses sodium citrate and sodium chloride to maintain a neutral 7.0 pH. Other buffers may use a mixture of sodium citrate and citric acid – canonical buffer tables compiled for biochemical studies[2] describe solutions of citrate and acid for buffer pHs of between 3.0 and 6.2.

Citric acid can act as a mild chelating agent; citrate, usually in the form of trisodium citrate, may be given as an anticoagulant, because it chelates calcium ions, and therefore inhibits coagulation. Another application is in the form of iron(II) citrate as a nutritional supplement. Here, the benefit is the solubility as a chelate of the otherwise mostly insoluble iron.

Citrate is an intermediate in the TCA (Krebs) cycle. After the pyruvate dehydrogenase complex forms acetyl-CoA, from pyruvate and five cofactors (thiamine pyrophosphate, lipoamide, FAD, NAD+, and CoA), citrate synthase catalyzes the condensation of oxaloacetate with acetyl CoA to form citrate. Citrate continues in the TCA cycle via aconitase with the eventual regeneration of oxaloacetate, which can combine with another molecule of acetyl CoA and continue cycling.

Citrate can also be transported out of the mitochondria and into the cytoplasm, then broken down into acetyl-CoA for fatty acid synthesis. Citrate is a positive modulator of this conversion, and allosterically regulates the enzyme acetyl-CoA carboxylase, which is the regulating enzyme in the conversion of acetyl-CoA into malonyl-CoA (the commitment step in fatty acid synthesis). In short, citrate is transported to the cytoplasm, converted to acetyl CoA, which is converted into malonyl CoA by the acetyl CoA carboxylase, which is allosterically modulated by citrate.

High concentrations of cytosolic citrate can inhibit phosphofructokinase, catalyst of one of the rate-limiting steps of glycolysis.