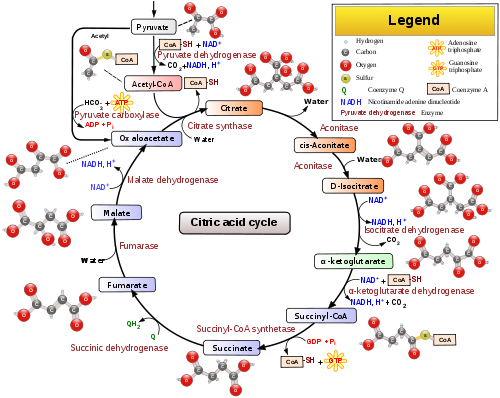 Overview of the citric acid cycle

The citric acid cycle — also known as the tricarboxylic acid cycle (TCA cycle), the Krebs cycle, or the Szent-Györgyi-Krebs cycle[1][2] — is a series of chemical reactions which is used by all aerobic living organisms to generate energy through the oxidization of acetate derived from carbohydrates, fats and proteins into carbon dioxide and water. In addition, the cycle provides precursors for the biosynthesis of compounds including certain amino acids as well as the reducing agent NADH that is used in numerous biochemical reactions. Its central importance to many biochemical pathways suggests that it was one of the earliest established components of cellular metabolism and may have originated abiogenically.[3]

The name of this metabolic pathway is derived from citric acid (a type of tricarboxylic acid) which is first consumed and then regenerated by this sequence of reactions to complete the cycle. In addition, the cycle consumes acetate in the form of acetyl-CoA, reduces NAD+ to NADH, and produces carbon dioxide. The NADH generated by the TCA cycle is fed into the oxidative phosphorylation pathway. The net result of these two closely linked pathways is the oxidation of nutrients to produce energy in the form of ATP.

In eukaryotic cells, the citric acid cycle occurs in the matrix of the mitochondrion. Bacteria also use the TCA cycle to generate energy, but since they lack mitochondria, the reaction sequence is performed in the cytosol.

The components and reactions of the citric acid cycle were established in the 1930s by seminal work from the Nobel laureates Albert Szent-Györgyi[4] and Hans Adolf Krebs.[5]

One of the primary sources of acetyl-CoA are sugars that are broken down by glycolysis to produce pyruvate that in turn is decarboxylated by the enzyme pyruvate dehydrogenase generating acetyl-CoA according to the following reaction scheme:

The product of this reaction, acetyl-CoA, is the starting point for the citric acid cycle. Below is a schematic outline of the cycle:

Two carbon atoms are oxidized to CO2, the energy from these reactions being transferred to other metabolic processes by GTP (or ATP), and as electrons in NADH and QH2. The NADH generated in the TCA cycle may later donate its electrons in oxidative phosphorylation to drive ATP synthesis; FADH2 is covalently attached to succinate dehydrogenase, an enzyme functioning both in the TCA cycle and the mitochondrial electron transport chain in oxidative phosphorylation. FADH2, therefore, facilitates transfer of electrons to coenzyme Q, which is the final electron acceptor of the reaction catalyzed by the Succinate:ubiquinone oxidoreductase complex, also acting as an intermediate in the electron transport chain.[9]

The citric acid cycle is continuously supplied with new carbon in the form of acetyl-CoA, entering at step 1 below.[10]

The GTP that is formed by GDP-forming succinyl-CoA synthetase may be utilized by nucleoside-diphosphate kinase to form ATP (the catalyzed reaction is GTP + ADP → GDP + ATP).[9]

Products of the first turn of the cycle are: one GTP (or ATP), three NADH, one QH2, two CO2.

Because two acetyl-CoA molecules are produced from each glucose molecule, two cycles are required per glucose molecule. Therefore, at the end of two cycles, the products are: two GTP, six NADH, two QH2, and four CO2

The total number of ATP obtained after complete oxidation of one glucose in glycolysis, citric acid cycle, and oxidative phosphorylation is estimated to be between 30 and 38. A recent assessment of the total ATP yield with the updated proton-to-ATP ratios provides an estimate of 29.85 ATP per glucose molecule.[13]

Although pyruvate dehydrogenase is not technically a part of the citric acid cycle, its regulation is included here.

Citrate is used for feedback inhibition, as it inhibits phosphofructokinase, an enzyme involved in glycolysis that catalyses formation of fructose 1,6-bisphosphate,a precursor of pyruvate. This prevents a constant high rate of flux when there is an accumulation of citrate and a decrease in substrate for the enzyme.

Recent work has demonstrated an important link between intermediates of the citric acid cycle and the regulation of hypoxia-inducible factors (HIF). HIF plays a role in the regulation of oxygen homeostasis, and is a transcription factor that targets angiogenesis, vascular remodeling, glucose utilization, iron transport and apoptosis. HIF is synthesized consititutively, and hydroxylation of at least one of two critical proline residues mediates their interaction with the von Hippel Lindau E3 ubiquitin ligase complex, which targets them for rapid degradation. This reaction is catalysed by prolyl 4-hydroxylases. Fumarate and succinate have been identified as potent inhibitors of prolyl hydroxylases, thus leading to the stabilisation of HIF.[16]

Several catabolic pathways converge on the TCA cycle. Reactions that form intermediates of the TCA cycle in order to replenish them (especially during the scarcity of the intermediates) are called anaplerotic reactions.

The citric acid cycle is the third step in carbohydrate catabolism (the breakdown of sugars). Glycolysis breaks glucose (a six-carbon-molecule) down into pyruvate (a three-carbon molecule). In eukaryotes, pyruvate moves into the mitochondria. It is converted into acetyl-CoA by decarboxylation and enters the citric acid cycle.

In protein catabolism, proteins are broken down by proteases into their constituent amino acids. The carbon backbone of these amino acids can become a source of energy by being converted to acetyl-CoA and entering into the citric acid cycle.

In fat catabolism, triglycerides are hydrolyzed to break them into fatty acids and glycerol. In the liver the glycerol can be converted into glucose via dihydroxyacetone phosphate and glyceraldehyde-3-phosphate by way of gluconeogenesis. In many tissues, especially heart tissue, fatty acids are broken down through a process known as beta oxidation, which results in acetyl-CoA, which can be used in the citric acid cycle. Beta oxidation of fatty acids with an odd number of methylene groups produces propionyl CoA, which is then converted into succinyl-CoA and fed into the citric acid cycle.[17]

The total energy gained from the complete breakdown of one molecule of glucose by glycolysis, the citric acid cycle, and oxidative phosphorylation equals about 30 ATP molecules, in eukaryotes. The citric acid cycle is called an amphibolic pathway because it participates in both catabolism and anabolism.

Click on genes, proteins and metabolites below to link to respective articles.[18]