Not to be confused with pyruvate decarboxylase, the enzyme which catalyses alcoholic fermentation. 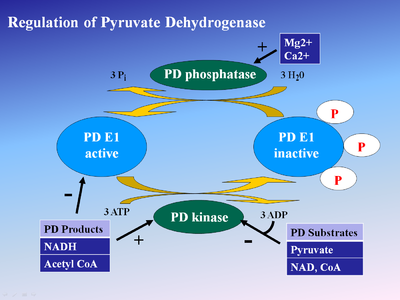 The ylide resonance form of thiamine pyrophosphate (TPP) begins by attacking the electrophilic ketone of pyruvate. The intermediate β-alkoxide then decarboxylates and the resulting enol is deprotonated on the carbon atom to form a stabilized 1,3-dipole involving a positively charged nitrogen atom of the thiamine heterocycle. This 1,3-dipole undergoes a reductive acetylation with lipoamide-E2.

Biochemical and structural data for E1 revealed a mechanism of activation of TPP cofactor by forming the conserved hydrogen bond with glutamate residue (Glu59 in human E1) and by imposing a V-conformation that brings the N4’ atom of the aminopyrimidine to intramolecular hydrogen bonding with the thiazolium C2 atom. This unique combination of contacts and conformations of TPP leads to formation of the reactive C2-carbanion, eventually. After the cofactor TPP decarboxylates pyruvate, the acetyl portion becomes a hydroxyethyl derivative covalently attached to TPP.[1] 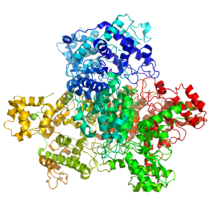 Pyruvate dehydrogenase (PDH) deficiency is a congenital degenerative metabolic disease resulting from a mutation of the pyruvate dehydrogenase complex (PDC) located on the X chromosome. Although defects have been identified in all 3 enzymes of the complex, the E1-α subunit is predominantly the culprit. Malfunction of the citric acid cycle due to PDH deficiency deprives the body of energy and leads to an abnormal buildup of lactate. PDH deficiency is a common cause of lactic acidosis in newborns and often presents with severe lethargy, poor feeding, tachypnea, and cases of death have occurred.[5]

In bacteria, a form of pyruvate dehydrogenase (also called pyruvate oxidase, EC 1.2.2.2) exists that links the oxidation of pyruvate into acetate and carbon dioxide to the reduction of ferrocytochrome. In E. coli this enzyme is encoded by the pox B gene and the protein has a flavin cofactor.[6] This enzyme increases the efficiency of growth of E. coli under aerobic conditions.[7]