Other names in common use include:

All dihydrolipoyl transacetylases have a unique multidomain structure consisting of (from N to C): 3 lipoyl domains, an interaction domain, and the catalytic domain (see the domain architecture at Pfam). Interestingly all the domains are connected by disordered, low complexity linker regions.

Depending on the species, multiple subunits of dihydrolipoyl transacetylase enzymes can arrange together into either a cubic or dodecahedral shape. These structure then form the catalytic core of the pyruvate dehydrogenase complex which not only catalyzes the reaction that transfers an acetyl group to CoA, but also performs a crucial structural role in creating the architecture of the overall complex.[4]

The cubic core structure, found in species such as Azotobacter vinelandii, is made up of 24 subunits total.[5][6] The catalytic domains are assembled into trimers with the active site located at the subunit interface. The topology of this trimer active site is identical to that of chloramphenicol acetyltransferase. Eight of these trimers are then arranged into a hollow truncated cube. The two main substrates, CoA and the lipoamide (Lip(SH)2), are found at two opposite entrances of a 30 Å long channel which runs between the subunits and forms the catalytic center. CoA enters from the inside of the cube, and the lipoamide enters from the outside.[7]

In many species, including bacteria such as Geobacillus stearothermophilus and Enterococcus faecalis [4] as well as mammals such as humans[8] and cows,[9] the dodecahedral core structure is made up of 60 subunits total. The subunits are arranged in sets of three, similar to the trimers in the cubic core shape, with each set making up one of the 20 dodecahedral vertices.

Pyruvate decarboxylation requires a few cofactors in addition to the enzymes that make up the complex. The first is thiamine pyrophosphate (TPP), which is used by pyruvate dehydrogenase to oxidize pyruvate and to form a hydroxyethyl-TPP intermediate. This intermediate is taken up by dihydrolipoyl transacetylase and reacted with a second lipoamide cofactor to generate an acetyl-dihydrolipoyl intermediate, releasing TPP in the process. This second intermediate can then be attacked by the nucleophilic sulfur attached to Coenzyme A, and the dihydrolipoamide is released. This results in the production of acetyl CoA, which is the end goal of pyruvate decarboxylation. The dihydrolipoamide is taken up by dihydrolipoyl dehydrogenase, and with the additional cofactors FAD and NAD+, regenerates the original lipoamide (with NADH as a useful side product). 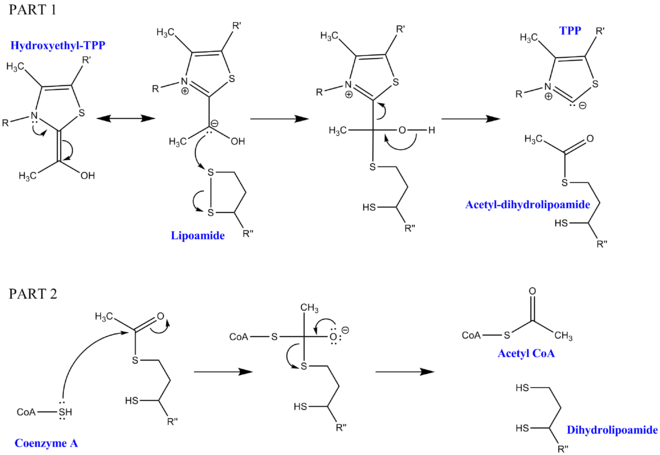 As mentioned above, dihydrolipoyl transacetylase participates in the pyruvate decarboxylation reaction that links glycolysis to the citric acid cycle. These metabolic processes are important for cellular respiration—the conversion of biochemical energy from nutrients into adenosine triphosphate (ATP) which can then be used to carry out numerous biological reactions within a cell. The various parts of cellular respiration take place in different parts of the cell. In eukaryotes, glycolysis occurs in the cytoplasm, pyruvate decarboxylation in the mitochondria, the citric acid cycle within the mitochondrial matrix, and oxidative phosphorylation via the electron transport chain on the mitochondrial cristae. Thus pyruvate dehydrogenase complexes (containing the dihydrolipoyl transacetylase enzymes) are found in the mitochondria of eukaryotes (and simply in the cytosol of prokaryotes).

Primary biliary cirrhosis (PBC) is an autoimmune disease characterized by autoantibodies against mitochondrial and nuclear antigens. These are called anti-mitochondrial antibodies (AMA) and anti-nuclear antibodies (ANA), respectively. These antibodies are detectable in the sera of PBC patients and vary greatly with regards to epitope specificity from patient to patient. Of the mitochondrial antigens that can generate autoantibodiy reactivity in PBC patients, the E2 subunit of the pyruvate dehydrogenase complex, dihydrolipoyl transacetylase, is the most common epitope (other antigens include enzymes of the 2-oxoacid dehydrogenase complexes as well as the other enzymes of the pyruvate dehydrogenase complexes).[10] Recent evidence has suggested that peptides within the catalytic site may present the immunodominant epitopes recognized by the anti-PDC-E2 antibodies in PBC patients.[11] There is also evidence of anti-PDC-E2 antibodies in autoimmune hepatitis (AIH) patients.[12]

Pyruvate dehydrogenase deficiency (PDH) is a genetic disease resulting in lactic acidosis as well as neurological dysfunction in infancy and early childhood. Typically PDH is the result of a mutation in the X-linked gene for the E1 subunit of the pyruvate dehydrogenase complex. However, there have been a few rare cases in which a patient with PDH actually has a mutation in the autosomal gene for the E2 subunit instead. These patients have been reported to have much less severe symptoms, with the most prominent disease manifestation being episodic dystonia, though both hypotonia and ataxia were also present.[13]

Click on genes, proteins and metabolites below to link to respective articles.[14]