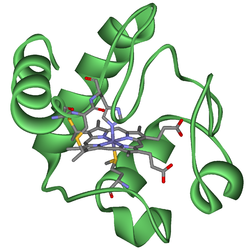 Cytochromes are, in general, membrane-bound hemoproteins that contain heme groups and carry out electron transport.

They are found either as monomeric proteins (e.g., cytochrome c) or as subunits of bigger enzymatic complexes that catalyze redox reactions.

Cytochromes were initially described in 1884 by MacMunn as respiratory pigments (myohematin or histohematin).[1] In the 1920s, Keilin rediscovered these respiratory pigments and named them the cytochromes, or “cellular pigments”, and classified these heme proteins, on the basis of the position of their lowest energy absorption band in the reduced state, as cytochromes a (605 nm), b (~565 nm), and c (550 nm). The UV-visible spectroscopic signatures of hemes are still used to identify heme type from the reduced bis-pyridine-ligated state, i.e., the pyridine hemochrome method. Within each class, cytochrome a, b, or c, early cytochromes are numbered consecutively, e.g. cyt c, cyt c1, and cyt c2, with more recent examples designated by their reduced state R-band maximum, e.g. cyt c559.[2]

The heme group is a highly-conjugated ring system (which allows its electrons to be very mobile) surrounding a metal ion, which readily interconverts between the oxidation states. For many cytochromes, the metal ion present is that of iron, which interconverts between Fe2+ (reduced) and Fe3+ (oxidised) states (electron-transfer processes) or between Fe2+ (reduced) and Fe3+ (formal, oxidised) states (oxidative processes). Cytochromes are, thus, capable of performing oxidation and reduction. Because the cytochromes (as well as other complexes) are held within membranes in an organized way, the redox reactions are carried out in the proper sequence for maximum efficiency.

In the process of oxidative phosphorylation, which is the principal energy-generating process undertaken by organisms, which need oxygen to survive, other membrane-bound and -soluble complexes and cofactors are involved in the chain of redox reactions, with the additional net effect that protons (H+) are transported across the mitochondrial inner membrane. The resulting transmembrane proton gradient ([protonmotive force]) is used to generate ATP, which is the universal chemical energy currency of life. ATP is consumed to drive cellular processes that require energy (such as synthesis of macromolecules, active transport of molecules across the membrane, and assembly of flagella).

Several kinds of cytochrome exist and can be distinguished by spectroscopy, exact structure of the heme group, inhibitor sensitivity, and reduction potential.

Three types of cytochrome are distinguished by their prosthetic groups:

In mitochondria and chloroplasts, these cytochromes are often combined in electron transport and related metabolic pathways:

A completely distinct family of cytochromes is known as the cytochrome P450 oxidases, so named for the characteristic Soret peak formed by absorbance of light at wavelengths near 450 nm when the heme iron is reduced (with sodium dithionite) and complexed to carbon monoxide. These enzymes are primarily involved in steroidogenesis and detoxification.