Myoglobin is an iron- and oxygen-binding protein found in the muscle tissue of vertebrates in general and in almost all mammals. It is related to hemoglobin, which is the iron- and oxygen-binding protein in blood, specifically in the red blood cells. The only time myoglobin is found in the bloodstream is when it is released following muscle injury. It is an abnormal finding, and can be diagnostically relevant when found in blood. [2]

Myoglobin (abbreviated Mb) is a single-chain globular protein of 153[3] or 154[4] amino acids, containing a heme (iron-containing porphyrin) prosthetic group in the center around which the remaining apoprotein folds. It has eight alpha helices and a hydrophobic core. It has a molecular weight of 17,699 daltons (with heme), and is the primary oxygen-carrying pigment of muscle tissues.[4] Unlike the blood-borne hemoglobin, to which it is structurally related,[5] this protein does not exhibit cooperative binding of oxygen, since positive cooperativity is a property of multimeric/oligomeric proteins only. Instead, the binding of oxygen by myoglobin is unaffected by the oxygen pressure in the surrounding tissue. Myoglobin is often cited as having an "instant binding tenacity" to oxygen given its hyperbolic oxygen dissociation curve. High concentrations of myoglobin in muscle cells allow organisms to hold their breaths longer. Diving mammals such as whales and seals have muscles with particularly high myoglobin abundance.[2]

Myoglobin was the first protein to have its three-dimensional structure revealed.[6] In 1958, John Kendrew and associates successfully determined the structure of myoglobin by high-resolution X-ray crystallography.[7] For this discovery, John Kendrew shared the 1962 Nobel Prize in chemistry with Max Perutz.[8] Despite being one of the most studied proteins in biology, its true physiological function is not yet conclusively established: mice genetically engineered to lack myoglobin are viable, but showed a 30% reduction in cardiac systolic output. They adapted to this deficiency through hypoxic genetic mechanisms and increased vasodilation.[9] In humans myoglobin is encoded by the MB gene.[10] 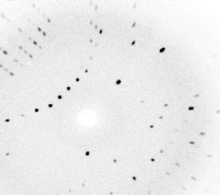 An X-ray diffraction image for the protein myoglobin

Myoglobin forms pigments responsible for making meat red. The color that meat takes is partly determined by the oxidation states of the iron atom in myoglobin and the oxygen species attached to it. When meat is in its raw state, the iron atom is in the +2 oxidation state, and is bound to a dioxygen molecule (O2). Meat cooked well done is brown because the iron atom is now in the +3 oxidation state, having lost an electron, and is now coordinated by a water molecule. Under some conditions, meat can also remain pink all through cooking, despite being heated to high temperatures. If meat has been exposed to nitrites, it will remain pink because the iron atom is bound to NO, nitric oxide (true of, e.g., corned beef or cured hams). Grilled meats can also take on a pink "smoke ring" that comes from the iron binding to a molecule of carbon monoxide to give metmyoglobin.[11] Raw meat packed in a carbon monoxide atmosphere also shows this same pink "smoke ring" due to the same coordination chemistry. Notably, the surface of this raw meat also displays the pink color, which is usually associated in consumers' minds with fresh meat. This artificially-induced pink color can persist in the meat for a very long time, reportedly up to one year.[12] Hormel and Cargill are both reported to use this meat-packing process, and meat treated this way has been in the consumer market since 2003.[13] Myoglobin is found in Type I muscle, Type II A and Type II B, but most texts consider myoglobin not to be found in smooth muscle.

Myoglobin is released from damaged muscle tissue (rhabdomyolysis), which has very high concentrations of myoglobin. The released myoglobin is filtered by the kidneys but is toxic to the renal tubular epithelium and so may cause acute renal failure.[14] It is not the myoglobin itself that is toxic (it is a protoxin) but the ferrihemate portion that is dissociated from myoglobin in acidic environments (e.g., acidic urine, lysozymes).

Myoglobin is a sensitive marker for muscle injury, making it a potential marker for heart attack in patients with chest pain.[15] However, elevated myoglobin has low specificity for acute myocardial infarction (AMI) and thus CK-MB, cTnT, ECG, and clinical signs should be taken into account to make the diagnosis.

Many functional models of myoglobin have been studied. One of the most important is that of picket fence porphyrin by James Collman. This model was used to show the importance of the distal prosthetic group. It serves three functions: