Aspartate transaminase (AST), also called aspartate aminotransferase (AspAT/ASAT/AAT) or serum glutamic oxaloacetic transaminase (SGOT), is a pyridoxal phosphate (PLP)-dependent transaminase enzyme (EC 2.6.1.1). AST catalyzes the reversible transfer of an α-amino group between aspartate and glutamate and, as such, is an important enzyme in amino acid metabolism. AST is found in the liver, heart, skeletal muscle, kidneys, brain, and red blood cells, and it is commonly measured clinically as a marker for liver health.

Aspartate transaminase catalyzes the interconversion of aspartate and α-ketoglutarate to oxaloacetate and glutamate.

As a prototypical transaminase, AST relies on PLP as a cofactor to transfer the amino group from aspartate or glutamate to the corresponding ketoacid. In the process, the cofactor shuttles between PLP and the pyridoxamine phosphate (PMP) form.[2] The amino group transfer catalyzed by this enzyme is crucial in both amino acid degradation and biosynthesis. In amino acid degradation, following the conversion of aspartate to glutamate, glutamate subsequently undergoes oxidative deamidation to form ammonium ions, which are excreted as urea. In the reverse reaction, aspartate may be synthesized from oxaloacetate, which is a key intermediate in the citric acid cycle.[3]

Two isoenzymes are present in a wide variety of eukaryotes. In humans:

These isoenzymes are thought to have evolved from a common ancestral AST via gene duplication, and they share a sequence homology of approximately 45%.[4]

AST has also been found in a number of microorganisms, including E. coli, H. mediterranei,[5] and T. thermophilus.[6] In E. coli, the enzyme is encoded by the aspCgene and has also been shown to exhibit the activity of an aromatic-amino-acid transaminase (EC 2.6.1.57).[7] 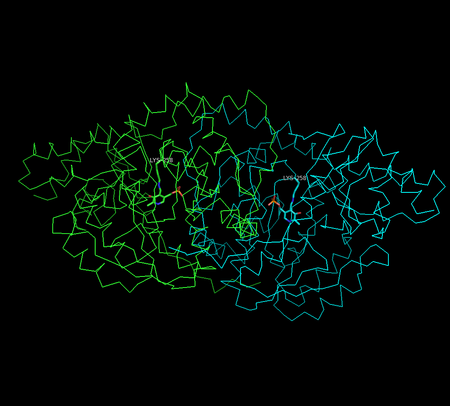 X-ray crystallography studies have been performed to determine the structure of aspartate transaminase from various sources, including chicken mitochondria,[8] pig heart cytosol,[9] and E. coli.[10][11] Overall, the three-dimensional polypeptide structure for all species is quite similar. AST is dimeric, consisting of two identical subunits, each with approximately 400 amino acid residues and a molecular weight of approximately 45 kD.[4] Each subunit is composed of a large and a small domain, as well as a third domain consisting of the N-terminal residues 3-14; these few residues form a strand, which links and stabilizes the two subunits of the dimer. The large domain, which includes residues 48-325, binds the PLP cofactor via an aldimine linkage to the ε-amino group of Lys258. Other residues in this domain – Asp 222 and Tyr 225 – also interact with PLP via hydrogen bonding. The small domain consists of residues 15-47 and 326-410 and represents a flexible region that shifts the enzyme from an "open" to a "closed" conformation upon substrate binding.[8][11][12]

The two independent active sites are positioned near the interface between the two domains. Within each active site, a couple arginine residues are responsible for the enzyme’s specificity for dicarboxylic acid substrates: Arg386 interacts with the substrate’s proximal (α-)carboxylate group, while Arg292 complexes with the distal (side-chain) carboxylate.[8][11]

In terms of secondary structure, AST contains both α and β elements. Each domain has a central sheet of β-strands with α-helices packed on either side.

Aspartate transaminase, as with all transaminases, operates via dual substrate recognition; that is, it is able to recognize and selectively bind two amino acids (Asp and Glu) with different side-chains.[13] In either case, the transaminase reaction consists of two similar half-reactions that constitute what is referred to as a ping-pong mechanism. In the first half-reaction, amino acid 1 (e.g., L-Asp) reacts with the enzyme-PLP complex to generate ketoacid 1 (oxaloacetate) and the modified enzyme-PMP. In the second half-reaction, ketoacid 2 (α-ketoglutarate) reacts with enzyme-PMP to produce amino acid 2 (L-Glu), regenerating the original enzyme-PLP in the process. Formation of a racemic product (D-Glu) is very rare.[14]

The specific steps for the half-reaction of Enzyme-PLP + aspartate ⇌ Enzyme-PMP + oxaloacetate are as follows (see figure); the other half-reaction (not shown) proceeds in the reverse manner, with α-ketoglutarate as the substrate.[2][3] 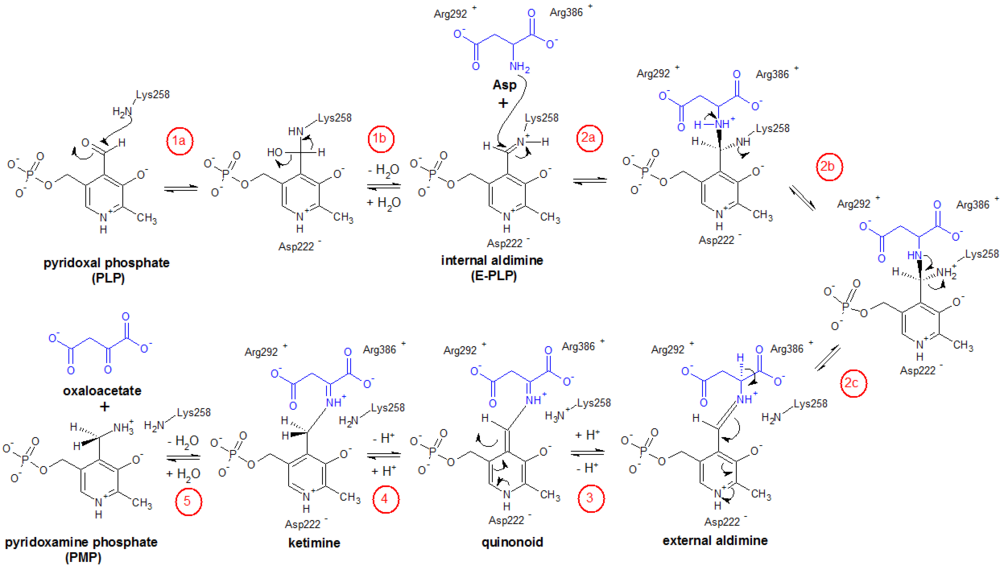 This mechanism is thought to have multiple partially rate-determining steps.[15] However, it has been shown that the substrate binding step (transaldimination) drives the catalytic reaction forward.[16]

AST is similar to alanine transaminase (ALT) in that both enzymes are associated with liver parenchymal cells. The difference is that ALT is found predominantly in the liver, with clinically negligible quantities found in the kidneys, heart, and skeletal muscle, while AST is found in the liver, heart (cardiac muscle), skeletal muscle, kidneys, brain, and red blood cells.[17] As a result, ALT is a more specific indicator of liver inflammation than AST, as AST may be elevated also in diseases affecting other organs, such as myocardial infarction, acute pancreatitis, acute hemolytic anemia, severe burns, acute renal disease, musculoskeletal diseases, and trauma.[18]

AST was defined as a biochemical marker for the diagnosis of acute myocardial infarction in 1954. However, the use of AST for such a diagnosis is now redundant and has been superseded by the cardiac troponins.[19]

It has also been shown to be a marker for chronic alcoholism. [21]