Propionyl-CoA carboxylase catalyses the carboxylation reaction of propionyl CoA in the mitochondrial matrix. The enzyme is biotin dependent. The product of the reaction is (S)-methylmalonyl CoA. Propionyl CoA is the end product of metabolism of odd-chain fatty acids, and is also a metabolite of most methyl-branched fatty acids. It is also the main metabolite of valine, and together with acetyl-CoA, is a metabolite of isoleucine, as well as a methionine metabolite. Propionyl-CoA is thus of great importance as a glucose precursor. (S)-Methylmalonyl-CoA is not directly utilizable by animals; it is acted on by a racemase to give (R)-methylmalonyl-CoA. The latter is converted by methylmalonyl-CoA mutase (one of a very few Vitamin B12 dependent enzymes) to give succinyl-CoA. The latter is converted to oxaloacetate and then malate in the Krebs cycle. Export of malate into the cytosol leads to formation of oxaloacetate, phosphoenol pyruvate, and other gluconeogenic intermediates.

It has been classified both as a ligase[1] and a lyase.[2]

Propionyl-CoA Carboxylase (PCC) is a 750 kDa alpha(6)-beta(6)-dodecamer. (Only approximately 540 kDa is native enzyme. [3] ) The alpha subunits are arranged as monomers, decorating the central beta-6 hexameric core. Said core is oriented as a short cylinder with a hole along its axis.

The alpha subunit of PCC contains the biotin carboxylase (BC) and biotin carboxyl carrier protein (BCCP) domains. A domain known as the BT domain is also located on the alpha subunit and is essential for interactions with the beta subunit. The 8-stranded anti-parallel beta barrel fold of this domain is particularly interesting. The beta subunit contains the carboxyltransferase (CT) activity.[4] 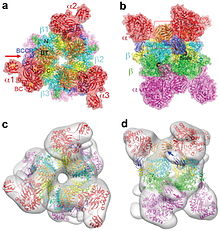 The BC and CT sites are approximately 55 Å apart, indicative of the entire BCCP domain translocating during catalysis of the carboxylation of propionyl-CoA. [5] This provides clear evidence of crucial dimeric interaction between alpha and beta subunits.

Figure 2.(a). Schematic drawing of the relative positioning of the BC and CT active sites in the holoenzyme. One α subunit and a β2 dimer (β1 from one layer and β4 from the other layer) are shown, and the viewing direction is the same as Fig. 1b. The two active sites are indicated with the stars, separated by 55 Å distance. The bound positions of ADP in complex with E. coli BC 18 and that of CoA in complex with the 12S subunit of transcarboxylase 21 are also shown. (b). Detailed interactions between BCCP-biotin and the C domain of a β subunit. Hydrogen-bonding interactions are indicated with the dashed lines in red. The N1′ atom of biotin is labeled as 1′, hydrogen-bonded to the main-chain carbonyl of Phe397. (c). Molecular surface of the CT active site, showing a deep canyon where both substrates are bound. (d). Schematic drawing of the CT active site.[5]

The biotin-binding pocket of PCC is hydrophobic and highly conserved. Biotin and propionyl-CoA bind perpendicular to each other in the oxyanion hole containing active site. The native enzyme to biotin ratio has been determined to be one mole native enzyme to 4 moles biotin. [6] The N1 of biotin is thought to be the active site base.[7]

Site-directed mutagenesis at D422 shows a change in the substrate specificity of the propionyl-CoA binding site, thus indicating this residue’s importance in PCC’s catalytic activity. [8] In 1979, inhibition by phenylglyoxal determined that a phosphate group from either propionyl-CoA or ATP reacts with an essential arginine residue in the active site during catalysis.[9] Later (2004), it was suggested that Arginine-338 serves to orient the carboxyphosphate intermediate for optimal carboxylation of biotin. [10]

The normal catalytic reaction mechanism involves a carbanion intermediate and does not proceed through a concerted process.[13] Figure 3 shows a probable pathway.

The reaction has been shown to be slightly reversible at low propionyl-CoA flux.[14]

a. 6-Deoxyerythronolide B: decrease in PCC levels lead to increased production [23]