Clopidogrel is a prodrug, the action of which may be related to an adenosine diphosphate (ADP) receptor on platelet cell membranes. The drug specifically and irreversibly inhibits the P2Y12 subtype of ADP receptor, which is important in aggregation of platelets and cross-linking by the protein fibrin.[1] The blockade of this receptor inhibits platelet aggregation by blocking activation of the glycoprotein IIb/IIIa pathway. The IIb/IIIa complex functions as a receptor mainly for fibrinogen and vitronectin but also for fibronectin and von Willebrand factor. Activation of this receptor complex is the "final common pathway" for platelet aggregation and is important in the cross-linking of platelets by fibrin.

Platelet inhibition can be demonstrated two hours after a single dose of oral clopidogrel, but the onset of action is slow, so that a loading-dose of 300–600 mg is usually administered.

Clopidogrel is indicated for:[3]

It is also used, along with aspirin, for the prevention of thrombosis after placement of intracoronary stent[3] or as an alternative antiplatelet drug for patients who are intolerant to aspirin.[4]

International guidelines granted the highest grade of recommendation for NSTE-ACS, PCI and stent,[clarification needed] for clopidogrel in addition to aspirin. Consensus-based therapeutic guidelines recommend also the use of clopidogrel, instead of aspirin, in patients requiring antiplatelet therapy but with a history of gastric ulceration, as inhibition of the synthesis of prostaglandins by aspirin (acetylsalicylic acid) can exacerbate this condition. A study has shown that in patients with healed aspirin-induced ulcers, however, patients receiving aspirin plus the proton pump inhibitor esomeprazole had a lower incidence of recurrent ulcer bleeding than patients receiving clopidogrel.[5] However, a more recent study suggested that prophylaxis with proton pump inhibitors along with clopidogrel following acute coronary syndrome may increase adverse cardiac outcomes, possibly due to inhibition of CYP2C19, which is required for the conversion of clopidogrel to its active form.[6][7][8] The European Medicines Agency has issued a public statement on a possible interaction between clopidogrel and proton pump inhibitors.[9] However, several cardiologists have voiced concern that the studies on which these warnings are based have many limitations and that it is not certain whether there really is an interaction between clopidogrel and proton pump inhibitors.[10]

Clopidogrel is marketed as clopidogrel bisulfate (clopidogrel hydrogen sulfate), most commonly under the trade names Plavix, as 75 mg oral tablets.

The active metabolite of clopidogrel [11]

After repeated 75-mg oral doses of clopidogrel (base), plasma concentrations of the parent compound, which has no platelet inhibiting effect, are very low and are generally below the quantification limit (0.000258 mg/L) beyond two hours after dosing.

Clopidogrel is a pro-drug activated in the liver by cytochrome P450 enzymes, including CYP2C19. The active metabolite has an elimination half-life of about eight hours and acts by forming a disulfide bridge with the platelet ADP receptor. Patients with a variant allele of CYP2C19 are 1.5 to 3.5 times more likely to die or have complications than patients with the high-functioning allele.[12][13][14]

Following an oral dose of 14C-labeled clopidogrel in humans, approximately 50% was excreted in the urine and approximately 46% in the feces in the five days after dosing.

Effect of Food: Administration of clopidogrel bisulfate with meals did not significantly modify the bioavailability of clopidogrel as assessed by the pharmacokinetics of the main circulating metabolite.

In March 2010, the U.S. Food and Drug Administration (FDA) added a boxed warning to Plavix alerting that the drug can be less effective in people who cannot metabolize the drug to convert it to its active form.[15][16]

CYP2C19 is an important drug-metabolizing enzyme that catalyzes the biotransformation of many clinically useful drugs including antidepressants, barbiturates, proton pump inhibitors, antimalarial and antitumor drugs. Clopidogrel is one of the drugs metabolized by this enzyme.

Several recent landmark studies have proven the importance of 2C19 genotyping in treatment using clopidogrel or Plavix. In March 2010, the FDA put a black box warning on Plavix to make patients and healthcare providers aware that CYP2C19 poor metabolizers, representing up to 14% of patients, are at high risk of treatment failure and that testing is available.[17] Researchers have found that patients with variants in cytochrome P-450 2C19 (CYP2C19) have lower levels of the active metabolite of clopidogrel, less inhibition of platelets, and a 3.58 times greater risk for major adverse cardiovascular events such as death, heart attack, and stroke; the risk was greatest in CYP2C19 poor metabolizers.[18]

In November 2009, the FDA announced that clopidogrel should not be taken with proton pump inhibitors such as omeprazole and esomeprazole.[22][23] 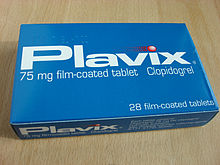 A box of Plavix

In 2006, generic clopidogrel was briefly marketed by Apotex, a Canadian generic pharmaceutical company before a court order halted further production until resolution of a patent infringement case brought by Bristol-Myers Squibb.[27] The court ruled that Bristol-Myers Squibb's patent was valid and provided protection until November 2011.[28]