Molecular mass
This article is about the mass of a single molecule. For the mass of a substance commonly used in basic stoichiometric calculations, see Molar mass. 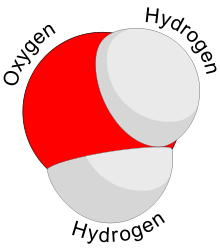 Assuming hydrogen and oxygen are standard weights in this image (as opposed to deuterium oxide) the molecular mass should be 18.01528 u.

Molecular mass differs from more common measurements of the mass of chemicals, such as molar mass, by taking into account the isotopic composition of a molecule rather than the average isotopic distribution of many molecules. As a result, molecular mass is a more precise number than molar mass; however it is more accurate to use molar mass on bulk samples. This means that molar mass is appropriate most of the time except when dealing with single molecules.

The concept of molecular mass is important for all molecules, especially for complex molecules like polymers and biopolymers such as proteins and carbohydrates. The determination of their molecular mass is often difficult, and is usually inferred from gel permeation chromatography and mass spectrometry.

There are varying interpretations of this definition. Many chemists use molecular mass as a synonym of molar mass,[3] differing only in units (see average molecular mass below). A stricter interpretation does not equate the two,as the mass of a single molecule is not the same as the average of an ensemble. Because a mole of molecules may contain a variety of molecular masses due to natural isotopes, the average mass is usually not identical to the mass of any single molecule. The actual numerical difference can be very small when considering small molecules and the molecular mass of the most common isotopomer in which case the error only matters to physicists and a small subset of highly specialized chemists; however it is always more correct, accurate and consistent to use molar mass in any bulk stoichiometric calculations. The size of this error becomes much larger when considering larger molecules or less abundant isotopomers. The molecular mass of a molecule which happens to contain heavier isotopes than the average molecule in the sample can differ from the molar mass by several mass units. Also the molar mass comes into comparison with the number of particles contained within the structure by multiplying the number of moles by Avogadro's constant: NA=6.022 141 79(30)·1023 mol−1.

The molecular mass can be calculated as the sum of the individual isotopic masses (as found in a table of isotopes) of all the atoms in any molecule. This is possible because molecules are created by chemical reactions which, unlike nuclear reactions, have very small binding energies compared to the rest mass of the atoms ( < 10−9) and therefore create a negligible mass defect. The use of average atomic masses derived from the standard atomic weights found on a standard periodic table will result in an average molecular mass, whereas the use of isotopic masses will result in a molecular mass consistent with the strict interpretation of the definition, i.e. that of a single molecule. However, any given molecule may contain any given combination of isotopes, so there may be multiple molecular masses for each chemical compound.

The basis for determination of molecular weight according to the Staudinger method (since replaced by the more general Mark-Houwink equation[4]) is the fact that relative viscosity of suspensions depends on volumetric proportion of solid particles.

There are several companies that manufacture accurate instruments for determining absolute molecular weight quickly and easily. These companies include Brookhaven Instruments, Malvern Instruments, and Horiba

The molar mass of a substance is the mass of 1 mol (the SI unit for the basis SI quantity amount of substance, having the symbol n) of the substance. This has a numerical value which is the average molecular mass of the molecules in the substance multiplied by Avogadro's constant approximately 6.022×1023. The most common units of molar mass are g/mol because in those units the numerical value equals the average molecular mass in units of u.

The average atomic mass of natural hydrogen is 1.00794 u and that of natural oxygen is 15.9994 u; therefore, the molecular mass of natural water with formula H2O is (2 × 1.00794 u) + 15.9994 u = 18.01528 u. Therefore, one mole of water has a mass of 18.01528 grams. However, the exact mass of hydrogen-1 (the most common hydrogen isotope) is 1.00783, and the exact mass of oxygen-16 (the most common oxygen isotope) is 15.9949, so the mass of the most common molecule of water is 18.01056 u. The difference of 0.00472 u or 0.03% comes from the fact that natural water contain traces of water molecules containing, oxygen-17, oxygen-18 or hydrogen-2 (Deuterium) atoms. Although this difference is trivial in bulk chemistry calculations, it can result in complete failure in situations where the behavior of individual molecules matters, such as in mass spectrometry and particle physics (where the mixture of isotopes does not act as an average).