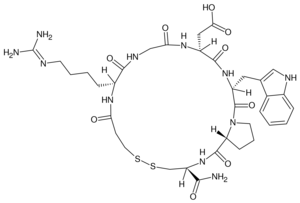 Eptifibatide (Integrilin, , also co-promoted by Schering-Plough/Essex), is an that selectively blocks the receptor. Eptifibatide is a cyclic heptapeptide derived from a protein found in the venom of the southeastern pygmy rattlesnake ("Sistrurus miliarus barbouri"). It belongs to the class of the so called arginin-glycin-aspartat-mimetics and reversibly binds to platelets. Eptifibatide has a short . The drug is the third inhibitor of GPIIb/IIIa that has found broad acceptance after the specific antibody and the non-peptide entered the global market.

Eptifibatide is used to reduce the risk of acute cardiac ischemic events (death and/or myocardial infarction) in patients with unstable angina or non-ST-segment-elevation (e.g., non-Q-wave) myocardial infarction (i.e., non-ST-segment elevation acute coronary syndromes) both in patients who are to receive non surgery (conservative) medical treatment and those undergoing (PCI).

The drug is always applied together with or and (low molecular weight or unfractionated) . Additionally, the usual supportive treatment consisting of applications of nitrates, beta-blockers, lidocaine, opioid analgesics and/or benzodiazepines should be employeed as indicated. Angiographic evaluation and other intensive diagnostic procedures may be considered a first line task before initiating therapy with eptifibatide.

The drug should exclusively be used in hospitalized patients both because of the serious degree of patients' illness and because of the possible side-effects of eptifibatide.

* : The drug is contraindicated in patients with platelet counts of less than 100,000 because no clinical experience exists regarding such patients.
* : Eptifibatide undergoes renal elimination. In such patients with renal insufficiency where a glycoprotein IIb/IIIa inhibitor is likely to provide benefit, (trade name: ) is an alternative medication.
* Current bleeding tendencies or abnormally prolonged coagulation parameters observed within 30 days before starting therapy with eptifibatide is intended.
* Coagulation parameters such as ACT, aPTT, TT, and PT should be followed closely during therapy and afterwards.
* to eptifibatide and/or other ingredients.
* Severe, uncontrolled .
* Pregnancy : No experience exists. Pregnant patients should be treated only when clearly needed.
* Lactation : No human data exists. Breast-feeding should be avoided during treatment in order to prevent damage to the newborn.
* Geriatric patients : No differences in side effects compared with younger patients have been seen. Nevertheless, geriatric patients should be very closely observed for bleeding and other side-effects.
* Pediatric patients : Eptifibatide is not indicated in patients below 18 years of age, because no experience exists.

It should be noticed that all patients receiving eptifibatide were seriously ill and most of them were concomitantly treated with other drugs known to have the potential to cause significant side effects. Therefore, not all side effects listed as follows may be attributable to eptifibatide treatment alone:

The major adverse event in the PURSUIT study was severe . Bleeding occurred as well at sites of clinical intervention (local sites) as at other sites (systemically) like urogenital bleedings. Sometimes, these events were severe enough to require transfusion of blood or plasma concentrates to stop bleeding and counteract . Severe bleedings occurred in 4.4 and 4.7 % of patients respectively depending on the infusion rate (0.5 µg/kg and minute vs. 0.75 µg/kg and minute). A few cases of death due to severe bleeding events attributable to drug therapy were reported. No cases of hemorrhagic stroke were seen. Thrombocytopenia of unknown origin (allergic reaction?) was also noticed in 0.2 % of patients.

Additionally, was seen frequently (6 %). Cardiovascular failure was also frequent (2 %) as were serious arrhythmias (ventricular fibrillation 1.5 %, atrial fibrillation 6 %). Severe allergic (anaphylactic) reactions occurred in almost 0.2 % of patients. These reactions can be life-threatening and may be due to the peptide character of eptifibatide. Other side effects were rare and mild in nature and may not be connected to eptifibatide therapy.

The recommended adult dosage is an i.v. loading dose of 180 µg/kg over 1 to 2 minutes immediately after diagnosis, followed by continuous i.v.-infusion of 2 µg/kg per minute until either hospital discharge or initiation of coronary artery bypass grafting, or for up to 72 hours. At least 4 hours before discharge all local or systemic bleedings should have been controlled and terminated.

Eptifibatide was licensed due to the positive results of the so called PURSUIT study encompassing 10,948 patients. In this study all patients had suffered either unstable angina or a non-ST-segment-elevation myocardial infarction. Significantly fewer patients developed a myocardial infarction under therapy with eptifibatide. Death rates showed a tendency in favour of eptifibatide, but this superiority was not statistically significant.

Sometimes the treating physicians require the patient after discharge from hospital to continue treatment with aspirin or clopidrogel or heparin for a few weeks, some months or even for life (as usually is the case with aspirin) to prevent recurrence of symptoms, development of myocardial infarction and/or death related to cardiovascular disease. These advises should be adhered to strictly.Eptifibatide is one of very many antiplatelet drugs [http://www.healthvalue.net/antiplateletdrugs.html] that all have different consequences on the platelet's activity.

Integrilin was invented by Robert M. Scarborough [http://www.sfgate.com/cgi-bin/article.cgi?file=/c/a/2006/08/01/BAGFLK8UD41.DTL] and David Phillips, at COR Therapeutics, Inc. in South San Francisco, CA. The company was acquired by Millennium pharmaceuticals,Inc,. of MA in 2001. David Phillips is also the original discoverer of GPIIb/IIIa on the platelets ( [http://www.neurology.org/cgi/content/abstract/57/suppl_2/S12] ). Robert Scarborough, a medicinal chemist, is also the discoverer of Natrecor (), sold by Johnson and Johnson.