Sanofi S.A. is a multinational pharmaceutical company headquartered in Paris, France, the world's fourth-largest by prescription sales.[2][3] Sanofi engages in the research and development, manufacturing and marketing of pharmaceutical products for sale principally in the prescription market, but the firm also develops over-the-counter medication. The company covers 7 major therapeutic areas: cardiovascular, central nervous system, diabetes, internal medicine, oncology, thrombosis and vaccines (it is the world's largest producer of the latter through its subsidiary Sanofi Pasteur).[4] Sanofi is a full member of the European Federation of Pharmaceutical Industries and Associations (EFPIA).[5]

The company was formed as Sanofi-Aventis in 2004 by the merger of Aventis and Sanofi-Synthélabo. It changed its name to Sanofi in May 2011.

Aventis was formed in 1999 when French company Rhône-Poulenc S.A. merged with the German corporation Hoechst Marion Roussel, which itself was formed from the 1995 merger of Hoechst AG with Roussel Uclaf and Marion Merrell Dow. The merged company was based in Schiltigheim, near Strasbourg, France.

Sanofi-Aventis was formed in 2004 when Sanofi-Synthélabo acquired Aventis. In early 2004, Sanofi-Synthélabo made a hostile takeover bid worth €47.8 billion for Aventis. Initially, Aventis rejected the bid because it felt that the bid offered inferior value based on the company's share value. The three-month takeover battle concluded when Sanofi-Synthélabo launched a friendly bid of €54.5 billion in place of the previously rejected hostile bid. French government intervention also played an active role. The French government, desiring what they called a "local solution", put heavy pressure on Sanofi-Synthélabo to raise its bid for Aventis after it became known that Novartis, a Swiss pharmaceutical company, was in the running.

October 2010: Sanofi-Aventis SA will lay off 1,700 US employees due to restructuring triggered by growing generic competition and other factors. The cuts being completed throughout 2011 according to transition needs. The layoffs amount to about 25 percents of the workers in the company's US pharmaceutical business. The company deny the action is related with acquisition plan of buying US biotech firm Genzyme Corp.[6]

The company dropped the -Aventis suffix of its name on 6 May 2011 after receiving approval at its AGM. The reason given by the company for the change was to make its name easier to pronounce in countries such as China.[7]

The company also produces a broad range of over-the-counter products, among them IcyHot for muscle pain, Gold Bond for skin irritation, and Selsun Blue dandruff shampoo (these three brands were acquired in 2010 when Sanofi-Aventis purchased Chattem). 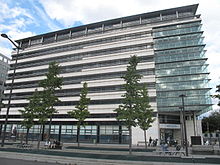 The head office is located in the 13th arrondissement of Paris, 174 Avenue de France. The architecture of the head office is of the predominate style of the area surrounding the François Mitterrand Library. After Sanofi and Aventis merged, the employees at the former Aventis head office in Schiltigheim, Alsace moved to Paris.[10]

In addition to internal research and development activities Sanofi is also involved in publicly funded collaborative research projects, with other industrial and academic partners. One example in the area of non-clinical safety assessment is the InnoMed PredTox.[11][12] The company is expanding its activities in joint research projects within the framework of the Innovative Medicines Initiative of EFPIA and the European Commission.[13]

In June 2010, Sanofi and the Charite University of Berlin signed a cooperation agreement for the research and development of medicines and therapies.[14]