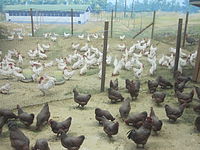 Poultry exhibit at the Louisiana State Exhibit Museum in Shreveport

Ducks amongst other poultry

Poultryfood is a category of domesticated birds kept by humans for the purpose of collecting their eggs, or raising for their meat and/or feathers. These most typically are members of the superorder Galloanserae (fowl), especially the order Galliformes (which includes chickens, quails and turkeys) and the family Anatidae (in order Anseriformes), commonly known as "waterfowl" (e.g. domestic ducks and domestic geese). Poultry also includes other birds which are killed for their meat, such as pigeons or doves or birds considered to be game, like pheasants. Poultry comes from the French/Norman word, poule, itself derived from the Latin word Pullus, which means small animal.

Poultry is the second most widely eaten meat in the world, accounting for about 30% of meat production worldwide, after pork at 38%.[1]

Cuts from a plucked chicken 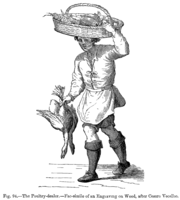 The Poultry-dealer, after Cesare Vecellio

The meatiest parts of a bird are the flight muscles on its chest, called breast meat, and the walking muscles on the first and second segments of its legs, called the thigh and drumstick, respectively. The wings are also eaten, usually (in the United States) without separating them, as in Buffalo wings; the first and second segment of the wings are referred to as drumette (meatier) and flat when these need to be distinguished, though these are technical terms. In Japan, the wing is frequently separated, and these parts are referred to as 手羽元 (teba-moto "wing base") and 手羽先 (teba-saki "wing tip").

Dark meat, which avian myologists refer to as "red muscle," is used for sustained activity—chiefly walking, in the case of a chicken. The dark color comes from the protein myoglobin, which plays a key role in oxygen uptake within cells. White muscle, in contrast, is suitable only for short, ineffectual bursts of activity such as, for chickens, flying. Thus the chicken's leg and thigh meat are dark while its breast meat (which makes up the primary flight muscles) is white. Other birds with breast muscle more suitable for sustained flight, such as ducks and geese, have red muscle (and therefore dark meat) throughout.

Consumption of large quantities of meat, including poultry, like overconsumption of any caloric food, has certain adverse effects[2] which can include: obesity, heart disease, and constipation.[3] In recent years, health concerns have been raised about the consumption of meat increasing the risk of cancer. Bird and animal fat, particularly from ruminants, tends to have a higher percentage of saturated fat vs. monounsaturated and polyunsaturated fat when compared to vegetable fats, with the exception of some tropical plant fats;[4] consumption of which has been correlated with various health problems. The saturated fat found in meat has been associated with significantly raised risks of colon cancer,[5][6] although evidence suggests that risks of prostate cancer are unrelated to animal fat consumption.[7] USDA claims (see Dietary Guidelines for Americans) that consumption of meat as a source of protein in the human diet is crucial have been resoundingly contradicted by recent studies.[8][9][10]

The correlation of meat, including poultry, consumption to increased risk of heart disease is controversial. A survey conducted in 1960 of 25,153 California Seventh-Day Adventists found that the risk of heart disease is three times greater for 45-64 year old men who eat meat daily, versus those who did not eat meat.[11] In another study[12] in 2010 involving over one million people who ate meat found that only processed meat had an adverse risk in relation to coronary heart disease. The study suggests that eating 50g (less than 2oz) of processed meat per day increases risk of coronary heart disease by 42%, and diabetes by 19%.

Chicken meat contains about two to three times as much polyunsaturated fat than most types of red meat when measured as weight percentage.[13]

A recent study by the Translational Genomics Research Institute showed that nearly half (47%) percent of the meat and poultry in U.S. grocery stores were contaminated with Staphylococcus aureus, with more than half (52%) of those bacteria resistant to antibiotics.[14]