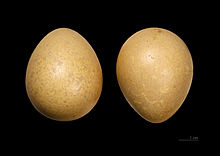 The Helmeted Guineafowl (Numida meleagris) is the best known of the guineafowl bird family, Numididae, and the only member of the genus Numida. It breeds in Africa, mainly south of the Sahara, and has been widely introduced into the West Indies, Brazil, Australia and southern France.

It breeds in warm, fairly dry and open habitats with scattered shrubs and trees such as savanna or farmland. Males often show aggression towards each other, and will partake in ravenous fighting which will leave other males bloodied and otherwise injured. Attempts at making themselves look fearsome is when their wings raise upwards from their sides and feathers bristle across the length of the body, or they may also rush forwards with a gaping beak. The nest is a well-hidden, generally unlined scrape and a clutch is normally 6-12 eggs which the female incubates for 26–28 days. Nests containing larger numbers of eggs are generally believed to be the result of more than one hen using the nest; eggs are large and an incubating bird could not realistically cover significantly more than a normal clutch. Domestic birds at least, are notable for producing extremely thick-shelled eggs that are reduced to fragments as the chicks hatch, rather than leaving two large sections and small chips from where any chick has removed the end of the egg. It has been noted that domesticated Guineahens are not the best of mothers, and will often abandon their nests. The chicks are cryptically coloured and rapid wing growth enables them to flutter onto low branches barely a week after hatching. These guineafowl live as long as 12 years in the wild. 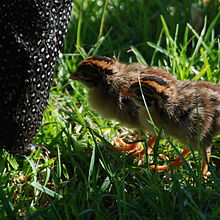 The Helmeted Guineafowl is a large (53–58 cm) bird with a round body and small head. They weigh about 1.3 kg. The body plumage is gray-black spangled with white. Like other guineafowl, this species has an unfeathered head, in this case decorated with a dull yellow or reddish bony knob, and red and blue patches of skin. The wings are short and rounded, and the tail is also short. Various sub-species are proposed, differences in appearance being mostly a large variation in shape, size and colour of the casque and facial wattles.

This is a gregarious species, forming flocks outside the breeding season typically of about 25 birds that also roost communally. Guineafowl are particularly well-suited to consuming massive quantities of ticks, which might otherwise spread lyme disease.[2] These birds are terrestrial, and prone to run rather than fly when alarmed. Like most gallinaceous birds, they have a short-lived explosive flight and rely on gliding to cover extended distances. Helmeted Guineafowl are great runners, and can walk 10 km and more in a day. They make loud harsh calls when disturbed. Their diet consists of a variety of animal and plant food; seeds, fruits, greens, snails, spiders, worms and insects, frogs, lizards, small snakes and small mammals. Guineafowl are equipped with strong claws and scratch in loose soil for food much like domestic chickens, although they seldom uproot growing plants in so doing. As with all of the numididae, they have no spurs.

Flocks of guineafowl have flourished in recent years in the Southern Suburbs of Cape Town, where they seem to have adapted remarkably well. The flocks move slowly the quieter suburban roads, looking for food on the grassy 'pavements' and in gardens where the fence is low enough for some to enter without feeling separated from the flock. They often roost at night on the roofs of bungalows. While residents generally appreciate the local wildlife, it can be a nuisance, obstructing traffic and making a lot of noise in the early morning. Their success is probably due to the large but cautious flock - they can fend off cats, do not enter gardens with dogs, and are visible enough in the quiet roads in which they live to avoid being run over. Although many young guineafowl manage to fall down drains (and are left behind by the flock), it is not enough to restrain their numbers. Adult birds are sometimes caught and eaten by the homeless.

In the early days of the European colonisation of North America, the native Wild Turkey (Meleagris gallopavo) was confused with this species. This led to the English name of the American bird, since Turkey and Guinea were equally far-off and exotic places. The word meleagris, Greek for guineafowl, is also shared in the scientific names of the two species, although for the guineafowl it is the species name, whereas for the turkey, it is the name of the genus and (in an altered state) the family.

Helmeted Guineafowl are often domesticated, and it is this species that is sold in Western supermarkets.

There are nine recognized subspecies: