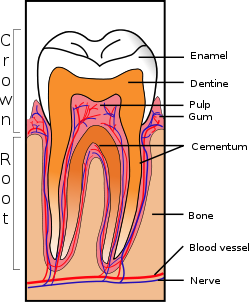 Parts of a tooth, including dentine

Dentine (AE: dentin) is a calcified tissue of the body, and along with enamel, cementum, and pulp is one of the four major components of teeth. Usually, it is covered by enamel on the crown and cementum on the root and surrounds the entire pulp. By weight, seventy percent of dentin consists of the mineral hydroxylapatite, twenty percent is organic material and ten percent is water.[1] Yellow in appearance, it greatly affects the color of a tooth due to the translucency of enamel. Dentin, which is less mineralized and less brittle than enamel, is necessary for the support of enamel.[2]

Dentin consists of microscopic channels, called dentinal tubules, which radiate outward through the dentin from the pulp to the exterior cementum or enamel border.[3] These tubules contain fluid and cellular structures. As a result, dentin has a degree of permeability which can increase the sensation of pain and the rate of tooth decay.

The formation of dentin, known as dentinogenesis, begins prior to the formation of enamel and is initiated by the odontoblasts of the pulp. Unlike enamel, dentin continues to form throughout life and can be initiated in response to stimuli, such as tooth decay or attrition.

There are different types of dentin, differentiated by appearance and stage of development. Primary dentin forms most of the tooth. Secondary dentin develops after root formation is complete and forms much more slowly than primary dentin. Tertiary dentin forms as a biological response to stimuli.

Dentine is bone like matrix characterized by multiple closely packed dentinal tubules that traverse its entire thickness and contain the cytoplasmic extensions of odontoblasts that once formed the dentine and maintain it. The cell bodies of the odontoblasts are aligned along the inner aspect of dentine against a layer of predentine where they also form the peripheral boundary of the dental pulp.

Primary dentin, the most prominent dentin in the tooth, lies between the enamel and the pulp chamber. The outer layer closest to enamel is known as mantle dentin. This layer is unique to the rest of primary dentin. Mantle dentin is formed by newly differentiated odontoblasts and forms a layer approximately 150 micrometers wide. Unlike primary dentin, mantle dentin lacks phosphoryn, has loosely packed collagen fibrils and is less mineralized. Below it lies the circumpulpal dentin, a more mineralized dentin which makes up most of the dentin layer and is secreted after the mantle dentin by the odontoblasts.

Newly secreted dentin is unmineralised and is called predentin. It is easily identified in haematoxylin and eosin stained section since it stains less intensely then dentin. It is usually 10-47 micrometer and lines the innermost region of the dentin. It is unmineralized and consists of collagen, glycoproteins and proteoglycans. It is similar to osteoid in bone and is thickest when dentinogenesis is occurring.

Secondary dentin is formed after root formation is complete, normally after the tooth has erupted and is functional. It grows much more slowly than primary dentin, but maintains its incremental aspect of growth. It has a similar structure to primary dentin, although its deposition is not always even around the pulp chamber. It is the growth of this dentin that causes the decrease in the size of the pulp chamber with age. This is clinically known as pulp recession; cavity preparation in young patients therefore carries a greater risk of exposing the pulp. If this occurs, the pulp can be treated by different therapies such as direct pulp capping. Pulp capping is most successful if followed by a stainless steel crown. Attempts are made not to extract a pulpal exposure as to maintain space in the primary dentition.

Tertiary dentin is dentin formed as a reaction to external stimulation such as cavities. It is of two types, either reactionary, where dentin is formed from a pre-existing odontoblast or is it reparative, where newly differented odontoblast-like cells are formed due to the death of the original odontoblasts, from a pulpal progenitor cell. Tertiary dentin is only formed by an odontoblast directly affected by stimulus, therefore the architecture and structure depends on the intensity and duration of the stimulus e.g. if the stimulus is a carious lesion, there would be extensive destruction of dentin and damage to the pulp, due to the differentiation of bacterial metabolites and toxins. Thus tertiary dentin is deposited rapidly, with a sparse and irregular tubular pattern and some cellular inclusions known as osteodentin. However if the stimulus is less active, it would be laid down less rapidly with a more regular tubular pattern and hardly any cellular inclusions. This is an amazing spectacle.

Elephant ivory is solid dentin. The structure of the dentinal tubules contributes both to its porosity (useful for piano keys) and its elasticity (useful for billiard balls.) Elephant tusks are formed with a thin cap of enamel, which soon wears away, leaving the dentin exposed. Exposed dentin in humans causes the symptom of sensitive teeth.

Because dentin is softer than enamel, it wears away more quickly than enamel. Some mammalian teeth exploit this phenomenon, especially herbivores such as horses, deer or elephants. In many herbivores, the occlusal (biting) surface of the tooth is composed of alternating areas of dentin and enamel. Differential wearing causes sharp ridges of enamel to be formed on the surface of the tooth (typically a molar), and to remain during the working life of the tooth. Herbivores grind their molars together as they chew (masticate), and the ridges help to shred tough plant material.

Unlike enamel, dentin may be demineralized and stained for histological study. Dentin rates approximately 3 on the Mohs scale of mineral hardness.

A material similar to dentin forms the hard material that makes up dermal denticles in sharks and other cartilaginous fish.