The maxillary central incisor is a human tooth in the front upper jaw, or maxilla, and is usually the most visible of all teeth in the mouth. It is located mesial (closer to the midline of the face) to the maxillary lateral incisor. As with all incisors, their function is for shearing or cutting food during mastication (chewing). There are no cusps on the teeth. Instead, the surface area of the tooth used in eating is called an incisal ridge or incisal edge. Formation of these teeth begin at 14 weeks in utero for the deciduous (baby) set and 3–4 months of age for the permanent set.[1]

The aggregate of cells which eventually form a tooth are derived from the ectoderm of the first branchial arch and the ectomesenchyme of the neural crest.[5] As in all cases of tooth development, the first hard tissue to begin forming is dentin, with enamel appearing immediately afterwards.[citation needed]

The deciduous maxillary central incisor begins to undergo mineralization 14 weeks in utero, and at birth 5/6ths of the enamel is formed.[6] The crown of the tooth is completed 1.5 months after birth and erupts into the mouth at around 10 months of age, making these teeth usually the second type of teeth to appear. The root completes its formation when the child is 1.5 years old.[citation needed]

The permanent maxillary central incisor begins to undergo mineralization when a child is 3–4 months of age.[7] The crown of the tooth is completed at around 4–5 years of age and erupts into the mouth at 7–8 years of age. The root completes its formation when the child is 10 years old.[citation needed]

The overall length of the deciduous maxillary central incisor is 16 mm on average, with the crown being 6 mm and the root being 10 mm.[8] In comparison to the permanent maxillary central incisor, the ratio of the root length to the crown length is greater in the deciduous tooth. The diameter of the crown mesiodistally is greater than the length cervicoincisally, which makes the tooth appear wider rather than taller from a labial viewpoint.

The marginal ridges and the cingulum of the tooth are well-developed. The cingulum reaches incisally a great length and is large enough to create small fossa on either side of it. Depicted by the cementoenamel junction, the cervical line is the border between the root and crown of a tooth. On the mesial and distal surfaces, the cervical line curves incisally, which is also seen in the permanent maxillary central incisor.[citation needed]

The root of this tooth is cone-shaped with a rounded apex. Most of the surfaces are smooth, but the mesial surface of the root may have a developmental groove or a concavity.[citation needed]

The permanent maxillary central incisor is the widest tooth mesiodistally in comparison to any other anterior tooth. It is larger than the neighboring lateral incisor and is usually not as convex on its labial surface. As a result, the central incisor appears to be more rectangular or square in shape. The mesial incisal angle is sharper than the distal incisal angle. When this tooth is newly erupted into the mouth, the incisal edges have three rounded features called mammelons.[9] Mammelons disappear with time as the enamel wears away by friction.

Generally, there are gender differences in the appearance of this tooth. In males, the size of the maxillary central incisor is larger usually than in females. Gender differences in enamel thicknes and dentin width are low. Age differences in the gingival-incisal length of maxillary central incisors are seen and are attributed to normal attrition occurring throughout life. Thus, younger individuals have a greater gingival incisal length of the teeth than older individuals.[citation needed]

The labial view of this tooth considers the portion of the tooth visible from the side where the lips would be. The mesial outline of the tooth is straight or slightly convex, whereas the distal outline is much more convex.[10] Consequently, the height of curvature (the point furthest away from the central axis of the tooth) is closer to the mesioincisal angle on the mesial side while more apical on the distal side. the distal outline of the crown is more convex than the mesial outline, and the distoincisal angle is not as sharp as the mesoincisal angle. After the mammelons are worn away, the incisal edge of the maxillary central incisor is straight mesiodistally. The center of the incisal edge curves slightly downward in the center of the tooth. The cervical line, which is seen as the border between the crown and the root of the tooth, is closer to the apex of the root in the center of the tooth. This makes the cervical line appear as a semicircle in shape.[citation needed]

The mesial view of this tooth considers the portion of the tooth visible from the side closest to where the middle line of the face would be.the mesial exis should be parallel to the midline. The mesial side of the maxillary central incisor shows the crown of the tooth as a triangle with the point at the incisal edge and the base at the cervix.[9] The root appears cone shaped with a blunt apex. Unlike most other teeth, a line drawn through the center of the incisal edge will also cross through the center of the root apex.[13] This also occurs in maxillary lateral incisors.

The crest of curvature for the palatal and labial surfaces is located directly incisally to the cervical line. The labial surface of the crown is convex from the crest of curvature to the incisal edge. The lingual surface of the crown is convex near the cingulum and near the incisal edge, but for the most part is concave along the surface between those two areas.[citation needed]

More than any other tooth in the mouth, the cervical line from this view curves tremendously toward the incisal. In an average crown length of 10.5 to 11 mm, the curvature of the cervical line in a maxillary central incisor is 3 to 4 mm.[13]

The incisal view of this tooth considers the portion of the tooth visible from the side where the incisal edge is located. From this angle, only the crown of the tooth is visible, and overall the tooth looks bilateral. The labial surface appears broad and flat. The lingual surface tapers toward the cingulum. The distance between the mesioincisal angle to the cingulum is slightly longer than the distance between the distoincisal angle to the cingulum.[14]

The pulp is the location of the nerve and blood supply of a tooth. In the deciduous maxillary central incisor, endodontic treatment is less frequent. In the permanent maxillary central incisor, root canal treatment can be effective. There frequently are three pulp horns in this tooth.[10] In nearly all maxillary central incisors, there is one canal with one apex.[15] During root canal therapy, access into the pulp is frequently located centrally on the lingual surface between the incisal edge and the cingulum. At the level of the cervical line, the shape of the canal is triangular but becomes circular at the middle level of the root.[15] Although the root is generally straight, the most common points of curvature is near the apex, and their direction is more common toward the distal and lingual. 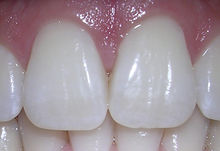 As with all maxillary anterior teeth, the central incisors are usually located facially to the mandibular teeth when the mouth is closed.[17] In instances when the maxillary anterior teeth are lingual to the mandibular teeth, the condition is referred to as an anterior crossbite. In some cases, this arrangement of teeth may indicate a displacement of the mandible relative to the maxilla and is called Class III or Pseudo-Class III malocclusion. Normal occlusion is Class I occlusion.

Sinodonty, a genetic variation occurring in Native Americans and some East Asian populations, is possibly a trait retained from an indigenous East Asian archaic human ancestor Homo Erectus Pekinensis. Among its features are shovel-shaped incisors that derive their name from the deeper-than-normal lingual fossa and prominent marginal ridges of the teeth.[citation needed] When seen from lingual view, the tooth is said to resemble a shovel and are rotated slightly inward. It is also common to see signs of attrition, which is wear over time from other tooth contact. The lingual of maxillary incisors and the facial of mandibular incisors are the most common places for attrition to occur.[citation needed]

When space exists between the contacts of the maxillary central incisors, the condition is referred to as a diastema or "gap tooth." One frequent cause of the space is the presence of a large labial frenum from the upper lip extending near the teeth. Treatment depends upon the cause and extent of the gap. Periodontal surgery may be required to reduce the frenum. A small space may be corrected with a filling, veneer, or crown. Larger spaces may require orthodontics.[citation needed]

All incisors have the potential to be affected by a case of congentital syphilis, which can cause a notch to form on the incisal edges of these teeth. These teeth, sometimes described as screwdriver-shaped, are called "Hutchinson's incisors."[20] They serve as part of Hutchinson's triad, which also includes interstitial keratitis and eighth nerve deafness.