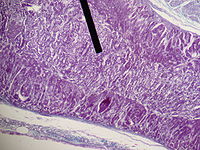 Medullary part of the adrenal gland (on the pointer).

Rather than releasing a neurotransmitter, the cells of the adrenal medulla secrete hormones.

Composed mainly of hormone-producing chromaffin cells, the adrenal medulla is the principal site of the conversion of the amino acid tyrosine into the catecholamines epinephrine, norepinephrine, and dopamine.

Because the ANS exerts direct control over the chromaffin cells the hormone release can occur rather quickly. In response to stressors such as exercise or imminent danger, medullary cells release catecholamines into the blood in a 17:3 ratio of adrenaline to noradrenaline.[1]

Notable effects of adrenaline and noradrenaline include increased heart rate and blood pressure, blood vessel constriction in the skin and gastrointestinal tract, bronchiole dilation, and increased metabolism, all of which are characteristic of the fight-or-flight response. Release of catecholamines is stimulated by nerve impulses, and receptors for catecholamines are widely distributed throughout the body.

Medullary cells are derived from the embryonic neural crest and, as such, are simply modified neurons.

In particular, they are modified postganglionic cells of the Autonomic nervous system that have lost their axons and dendrites, receiving innervation from corresponding preganglionic fibers. The cells form clusters around large blood vessels.

Moreover, as the synapses between pre- and postganglionic fibers are called ganglia, the adrenal medulla is actually a ganglion of the sympathetic nervous system.