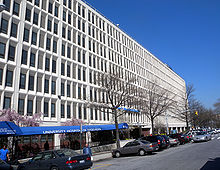 It includes the College of Medicine, College of Nursing, College of Health Related Professions, School of Graduate Studies, School of Public Health, and University Hospital of Brooklyn, as well as a student center and residences.

It has partnerships with several other institutions, and as of 2010 7,117 people worked there. The College of Nursing offers graduate programs in all major tracks. The College of Health Related Professions has the oldest midwifery program in the nation. The School of Graduate Studies does basic science education and research. SUNY Downstate’s Advanced Biotechnology Incubator and Biotechnology Park provides space for product developers and job training.

In 2010 SUNY Downstate celebrated its sesquicentennial, commemorating the year that the Long Island College Hospital (as it was then known) first opened its doors to students. Yet Downstate traces its roots back even further (to 1856) when a small group of physicians set up a free dispensary in Brooklyn to care for poor immigrants.

Known as the German General Dispensary, its original aim was to care for indigent Germans living in Brooklyn, but changing demographics soon required it to broaden its outreach. In 1857 it was reorganized as a charitable institution and renamed The St. John’s Hospital—the first of many name changes.

Officially chartered by the state in 1858 as the Long Island College Hospital of the City of Brooklyn, it was authorized to operate a hospital and confer medical degrees on candidates who attended two lecture courses and completed a three-year preceptorship under a practicing physician. The notion that patient care should be included as an essential part of medical training was revolutionary for its time, but other medical schools soon adopted the approach and it came to be regarded as essential pedagogy.

In 1860 the school officially opened its doors to 57 (male) students. The first faculty included many distinguished physicians, such as Dr. Austin Flint, Sr., remembered for his role in introducing the stethoscope into standard medical practice in this country. Dr. Flint delivered the commencement address on July 24, 1860, when the school graduated its first new doctors.

In the following decades The Long Island College Hospital greatly expanded both its facilities and medical school curriculum. By the time of the First World War, admission was opened to women and postgraduate training had been introduced. In 1930 the college and hospital were separated from one another so that each would be under its own governing board. The following year, the school was rechartered as the Long Island College of Medicine; the hospital retained its name and continues to operate to this day. Affiliations with other Brooklyn hospitals, including Kings County Hospital, made it possible for the college to conduct much of its clinical teaching at locations throughout the borough.

In 1945 the purchased a large tract of land that would become the site of the future Downstate Medical Center. The “Downstate” era began on April 5, 1950, with the signing of a merger contract between the State University of New York (SUNY) and the Long Island College of Medicine. The medical center came to be known as Downstate to distinguish it from the SUNY medical center in Syracuse, New York. Several years later the current campus was built in the East Flatbush section of Brooklyn.

In 1954 President Dwight D. Eisenhower laid the cornerstone for the Basic Science Building. In the following years, the complex grew rapidly, with the addition of a student center and residence halls, as well as nurses' residences. In 1966 Governor Nelson Rockefeller officiated at the dedication of University Hospital of Brooklyn (UHB), Downstate’s own teaching hospital. The School of Graduate Studies, the College of Health Related Professions, and the College of Nursing were established that same year. In 1987 Governor Mario Cuomo and Mayor Edward Koch helped break ground for the new Health Science Education Building, where most student classes now take place.

Since the arrival of John C. LaRosa, MD, in 2000 as SUNY Downstate’s new president, the medical center has entered a period of renewed growth and expansion. In addition to the completion of a multimillion capital improvement program for the hospital, and the addition of new clinical and research facilities, the campus has expanded to include a Biotechnology Park and Advanced Biotechnology Incubator.

Designed for start-up and early-stage biotech companies, it includes a commercial synthetic chemistry facility. Plans are underway to develop biotech research and manufacturing at the Brooklyn Army Terminal. These initiatives are part of a strategic plan to position SUNY Downstate as the center for biomedical discovery and development in Brooklyn.

Additionally, in 2011, Downstate completed the purchase of the economically troubled Long Island College Hospital, which was once the precursor hospital of the College of Medicine. This adds over 500 additional beds to the University Hospital of Brooklyn and consolidates many of the academic departments at Downstate. It also brings the number of campuses of the University Hospital of Brooklyn to three when including the UHB outpatient center at Bay Ridge.

BS with a Major in Nursing

Opened in 1966, University Hospital of Brooklyn (UHB) is an eight-story, 376-bed facility with 8 intensive care and step-down units, 12 operating rooms, an adult and pediatric ER, diagnostic and ambulatory surgery facility, and 75 outpatient clinics. It operates 3 community-based health centers in the Brooklyn neighborhoods of East New York, Bedford-Stuyvesant, and Midwood; an ambulatory care center in Bay Ridge; plus a nearby Dialysis Center. The addition of Long Island College Hospital brings the total to nearly 900-beds and the ability to offer comprehensive advanced medical care throughout Brooklyn.

Research is one of SUNY Downstate’s primary missions. In 2000, funding for sponsored research, including 506 basic science investigations and 44 programs funded by the National Institutes of Health (NIH), totaled close to $50 million. Developments include:

First in country to develop MRI machine capable of producing whole body images, and first to propose fundamental science underlying MRI technology. Built on the Downstate campus by Dr. Raymond Damadian, who was awarded the National Medal of Technology in 1988.

Nitric oxide molecule and its role in the body

Discovery of nitric oxide molecule and its relaxation effect on blood vessels has been the basis for heart medications and drugs to combat erectile dysfunction. Professor Emeritus Robert F. Furchgott was awarded the Nobel Prize for this work in 1998.

Dr. Clarence Dennis, chair of the Department of Surgery from 1951 to 1971, built his own heart/lung machine from scratch in his Brooklyn laboratory. He missed performing the first successful open heart surgery in the country by a matter of days, but did perform the second successful procedure– and the first in New York State—using his heart/lung machine, which is now part of the Smithsonian collection.

With over 40 scientists studying the hippocampus, Downstate is one of the largest facilities in the country for the study of neuroscience. Research by Todd Sacktor and Andre Fenton on the core molecular mechanism for memory storage was highlighted by Science magazine as one of the top 10 science breakthroughs of the year in 2006.

The late Dr. Henri Begleiter was the first to define the role that genetics plays in the development of alcoholism. His research has helped redefine medical science’s view of alcoholism. The nine-site Collaborative Study on the Genetics of Alcoholism, which he spearheaded, is the world’s largest study of the genetics of alcoholism.

In 1985, SUNY Downstate launched the first federally funded study of HIV transmission from mother to baby. Later, Dr. Howard Minkoff, led the first federally funded study of the manifestations of AIDS in women. With funding from the NIH’s Fogarty International Center, Dr. Jack DeHovitz established the Central/East European HIV Education Center. To date, it has trained more than 5,300 health care workers in Central and Eastern Europe, and in Africa.

SUNY Downstate Medical Center is the fifth largest employer in Brooklyn. Eighty-five percent of its employees are New York City residents; 62 percent live in Brooklyn. The center's total direct, indirect, and induced economic impact on New York State is in excess of $627 million. For every $1 the state invests, SUNY Downstate returns more than $12 to the economy. The addition to lifetime earning power for each nursing and allied health graduate ranges from $288,000 to $925,000. SUNY Downstate Medical Center attracted $33.7 million in external research funding in 1998/99, including $24 million from federal sources. Clarkson Avenue separates its campus from Kings County Hospital Center.