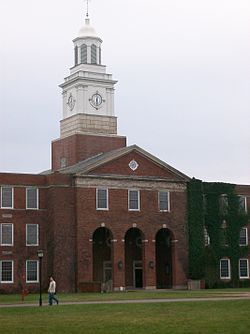 The State University of New York at Potsdam, also known as SUNY Potsdam, or, colloquially, Potsdam, is a public university located in the Village of Potsdam in St. Lawrence County, New York. Founded in 1816, it is among the 50 oldest colleges in the United States. It is composed of the College of Arts & Sciences, the School of Education and Professional Studies, and the Crane School of Music.

Potsdam was founded by Benjamin Raymond in 1816 as the St. Lawrence Academy. In 1834, the academy was chosen by the New York State Legislature to exclusively offer a teacher education program for its senatorial district. With funds from the state, and from support by preceptor Reverend Asa Brainerd, the first diploma in teaching was given in 1836, thus beginning the academy's and eventually the college's longstanding tradition of excellence in the field of teacher education.

In 1866, the State Legislature ended its funding of teacher education departments in private academies, and began establishing several normal schools throughout the state. The Village of Potsdam was thus named as one of four locations for new normal schools, and in 1867, the St. Lawrence Academy became the Potsdam Normal School.

By 1886, the Potsdam Normal School had become the first institution in the United States to offer a normal training course for public school music teachers in the United States. Founded by Julia E. Crane, the Crane Normal Institute of Music continues today as the world-renowned Crane School of Music as a leader in the field of music education.

The State University of New York was founded in 1948, and Potsdam became one its founding members, and was thus renamed New York State Teachers College at Potsdam. In 1964, the college's mission changed to providing multiple programs, and the university adopted its current name.

During the 1980s, despite the college's traditional strengths in music and education, the college gained recognition for its quickly blossoming mathematics program under the guidance of Dr. Clarence F. Stephens. Known as the Potsdam Miracle, Stephens transformed a practically non-existent department to having the third largest number of mathematics majors of any institution in the United States during his tenure.

The college has a total enrollment of approximately 4,500 students and approximately 930 freshmen entered Potsdam in 2010. That is the biggest first-year class since 1982, and an 11.4 percent increase over last year’s incoming freshman class, which had 835 students.[citation needed]

The college has two libraries, the Frederick W. Crumb Memorial Library in the center of the academic quad, and the Crane Music Library, located in Schuette Hall at the Crane complex. The college also has six performance facilities, The College Theater and the Black Box, both of which are in Satterlee hall, and the dance studio in Dunn Hall, plus three that serve the Crane School, an art gallery, and the Maxcy Hall Athletic Facility.

In 1981 and 1986, under Hall of Fame Coach Jerry Welsh, the Potsdam Bears basketball team won the NCAA Division III National Championship. In 1979, 1982, and 1982, the Potsdam Bears were national runners up for this title. The SUNY-Potsdam men's ice hockey team has competed in the NCAA for 27 years, from 1976 to the present. Most recently they played in the State University of New York Athletic Conference,[2] which is a Division III athletics conference.

SUNY Potsdam athletics were recently placed in NCAA probation due to an inadvertent error in the awarding of international student grants was noticed. The teams affected by the NCAA are the Men's and Women's hockey teams, Women's Volleyball, Men's and Women's Lacrosse, and the Women's Soccer team.

Many SUNY Potsdam students participate in the Army ROTC and Air Force ROTC programs. Students can apply for ROTC scholarships to the university, and may commission as officers in the United States military upon graduation. 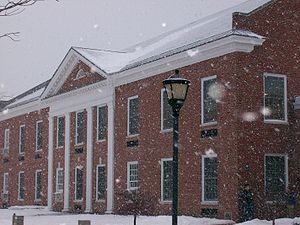 The Potsdam Miracle refers to the unusual success of the Mathematics Department at SUNY Potsdam, USA, under the guidance of Dr. Clarence F. Stephens, in attracting large numbers of students to become successful mathematics majors. For example, in one year, about 25% of the degrees conferred by Potsdam were in mathematics and over 40% of the institution’s honor students were mathematics majors. The 184 majors in that year was the third largest number of colleges and universities in the United States.

Seven of the eight valedictorians for the period 1980–1987 were mathematics majors. No student who graduated from SUNY Potsdam between the time of its founding in 1816 and the arrival of Stephens in 1969 is known to have subsequently earned a Ph.D. in mathematics. However, twelve students who graduated during Stephens's tenure are known to have done so, half of them women.

The Potsdam Miracle confirmed the effectiveness of the Potsdam Model of mathematics education. The model is based not on lowering student standard but in raising teaching standards.

In explaining the program in Dilip Datta's book Math Education at its Best: The Potsdam Model, Dr. Stephens said that his primary goal was to create the most favorable possible conditions for students to learn and for faculty to teach. He and a team of other student-oriented faculty members taught a course, "How to Read Mathematics Literature with Understanding and to Become Independent Learners," to students early in their study of mathematics. For undergraduates that was typically in the freshman or sophomore year, while for graduate students it was during their first year.

The Potsdam Model is “based on the premise that the study of pure mathematics can be undertaken successfully by a large number of students if they are provided with a supportive environment including: careful and considerate teaching by a well-trained and dedicated faculty, continual encouragement, successful (student) role models, enough success to develop self-esteem, enough time to develop intellectually, recognition of their achievement, and the belief that the study is a worthwhile endeavor.”

Stephens had largely developed his ideas and earlier implemented them at Morgan State College (now Morgan State University). Although no graduates of Morgan are known to have ever received a Ph.D. in mathematics, nine did so during his tenure there. Hence, the Potsdam Model is sometimes called the Morgan-Potsdam Model.