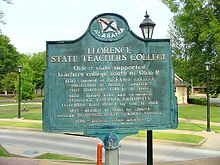 A normal school is a school created to train high school graduates to be teachers. Its purpose is to establish teaching standards or norms, hence its name. Most such schools are now called teachers' colleges; however, in some places, the term normal school is still used.

In 1685, John Baptist de La Salle, founder of the Institute of the Brothers of the Christian Schools, founded what is generally considered the first normal school, the École Normale, in Reims. According to the Oxford English Dictionary, normal schools in the United States and Canada trained primary school teachers, while in Europe, normal schools educated primary, secondary and tertiary-level teachers.[1] The first public normal school in the United States was founded in the Commonwealth of Massachusetts in 1839. It operates today as Framingham State University.

In the United States, teacher colleges all over the country were suddenly denominated universities beginning in the 1960s. A good example is Southern Illinois University, a mere teachers college that enrolls more than 26,000 students, has its own "university press", and issues most of its bachelor degree's in "education", an immediate sign not of a university but of what used to be called and more honestly, a normal school.[2]

Many famous state universities, such as the University of California, Los Angeles were founded as normal schools. In Canada, such institutions are typically part of a university as the Faculty of Education offering a one- or two-year Bachelor of Education program. It requires at least three (usually four) years of prior undergraduate studies.

The term "normal school" originated in the early 19th century from the French école normale.[3] The French concept of an "école normale" was to provide a model school with model classrooms to teach model teaching practices to its student teachers.[4] The children being taught, their teachers, and the teachers of the teachers were often together in the same building.[citation needed] Although a laboratory school, it was the official school for the children—primary or secondary.[citation needed]

In Finland, normal schools are under national university administration, whereas most schools are administered by the local municipality. A normal school is the official school of the children. Teacher aspirants do most of their compulsory trainee period in normal schools and teach while being supervised by a senior teacher. 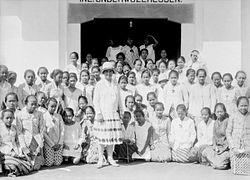 The terminology is still preserved in the official translations of such schools in China since the early 20th century, Beijing Normal University being the first. A Chinese normal university (Chinese: 師範大學; pinyin: shīfàn dàxué, abbreviated 師大; shīdà) is usually controlled by the national or provincial government.

In Taiwan, the four national normal universities (located in Taipei, Taichung, Changhua, and Kaohsiung) prepared secondary school teachers (although they have become de facto liberal arts universities in the late 20th century). There were also about ten Taiwanese provincial teachers' colleges (Chinese: 師範學院; pinyin: shīfàn xuéyuàn, abbreviated 師院; shīyuàn, literally "normal colleges") that originated as normal schools established by the Japanese. After the retrocession of the island, they were renamed provincial normal schools before becoming provincial teachers' colleges. In the early 1990s, these teachers' colleges came under national control and by the mid-2000s were all renamed "universities of education" (教育大學) or simply "universities" to signify their comprehensive training.

In Naga City, the Philippines, one can find the oldest normal school for girls in the Far East, the Universidad de Santa Isabel. It is a sectarian school run by the Daughters of Charity. The first secular normal school was founded in 1901 by the Thomasites, the Philippine Normal School. It was coverted into a college in 1949 and was elevated to its present university status in 1992 as the Philippine Normal University, . In 2009, it was named National Center of Excellence for Teacher Education by virtue of Republic Act 9647. 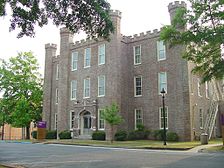 Historic Wesleyan Hall in Florence, Alabama, site of the first state-supported normal school established south of the Ohio River and now part of the University of North Alabama. Florence Normal School is one of many state normal schools that developed into four-year state teachers colleges and eventually into comprehensive state universities. 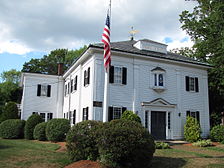 Site of the first public normal school
in the United States,
in Lexington, Massachusetts

In 1823, the Columbian School, the first normal school in the United States, was founded in Concord, Vermont by the Reverend Samuel Read Hall.[5] Influenced by similar academies in Prussia and elsewhere in Europe, American normal schools were intended to improve the quality of the burgeoning common school system by producing more qualified teachers.

Sixteen years later the first state-funded normal school was founded in Lexington, Massachusetts, thanks largely to the efforts of education reformers such as Horace Mann and James G. Carter.[6] Shortly after its founding that school moved to Framingham, Massachusetts. Today, Framingham State University is recognized as the oldest, continuously operated public normal school in the United States.

The first normal school west of the Appalachian Mountains in the United States was the Michigan State Normal School, now Eastern Michigan University. It was created by legislative action in 1849 and opened in Ypsilanti, Michigan in 1853.[7] Harris–Stowe State University, now a state university in Missouri, was founded by the St. Louis public school system in 1857 and claims to be the oldest normal school west of the Mississippi River. The first state-authorized normal college to open west of the Mississippi River was Winona State Normal School, now called Winona State University. Opening in 1858, its creation was one of the first acts of the newly formed Minnesota Legislature.

The State of Illinois passed an act to establish a normal school on 18 February 1857, and proposals were submitted to locate the new school in Batavia, Bloomington, Peoria, and Washington (in Tazewell County). Bids were opened by the State Board of Education in Peoria on 7 May 1857 and the offer from Bloomington, Illinois, was accepted. The normal school was located near the village of North Bloomington, which later was renamed Normal in honor of the school. The school, originally known as Illinois State Normal University (ISNU), is now known as Illinois State University.

The first normal school in what is now considered the Southwest was opened in 1879 as Sam Houston Normal Institute (now Sam Houston State University). Finally, the first state-run normal school on the West Coast was the Minns Evening Normal School, created in 1857 to train teachers for San Francisco's schools. It was taken over by the State of California in 1862 and became the California State Normal School (now San Jose State University).

Perhaps the oldest continually operating normal school in Latin America is the Escuela Normal Superior José Abelardo Núñez, founded in Santiago, Chile, in 1842 as the Escuela de Preceptores de Santiago under the direction of the emininent Argentine educator, writer, and politician Domingo Faustino Sarmiento. The first normal school in the Dominican Republic was founded in 1875 by Puerto Rican educator and activist Eugenio María de Hostos. In Argentina, normal schools were founded starting in 1852, and still exist today and carry that name. Teachers training is considered higher education and required a high school diploma, but normal schools have the particularity of granting four year teacher degrees while at the same time hosting secondary and primary school students (and sometimes kindergarten and pre-school). Teachers-to-be do intense practical training in the schools annexed to the higher education section.

In Rio de Janeiro city there is the bigger public normal senior high school of the city. In Instituto de Educação Sarah Kubitschek more of 2,000 new students begin their studies in theory of education in high school level. However, this school is a reflection of the poor quality of education in Brazil. Most students from senior high school are still functionally illiterate and they'll "teach" Brazilian kids to "read and write".