The municipalities (Finnish: kunta; Swedish: kommun) represent the local level of administration in Finland and act as the fundamental, self-governing administrative units of the country. The entire country is incorporated into municipalities and legally, all municipalities are equal, although certain municipalities are called cities. Municipalities have the right to levy a flat percentual income tax, which is between 16 and 20 percent, and they provide two thirds of public services. Municipalities control many community services, such as schools, health care and the water supply, and local streets. They do not maintain highways, set laws or keep police forces — these tasks are the responsibility of the central government.

Municipalities have council-manager government, i.e. they are governed by an elected council (kunnanvaltuusto, kommunfullmäktige), which is legally autonomous and answers only to the voters. The size of the council is proportional to the population, the extremes being 9 in Sottunga and 85 in Helsinki. Municipal managers (kaupunginjohtaja, stadsdirektör for cities, kunnanjohtaja, kommunsdirektör for other municipalities) are civil servants named by the council. The city manager of Helsinki is called ylipormestari/överborgmästare "Lord Mayor" for historical reasons.

There were previously no mayors in Finland, but after a change in law, Tampere was first city to elect a mayor (pormestari/borgmästare) in 2007. The mayor is not, however, currently elected directly, but by the municipal council. The mayor acts as municipal manager and as a speaker of municipal council.

The municipal tax is a flat income tax that is levied on lower income levels than state taxes, which in contrast are progressive taxes. The lowest tax of 16% is found in Kauniainen, while a 20% tax is in the another extreme. Municipalities also receive funding directly from the state (valtionapu). Municipalities levy a property tax on property, which is comparatively low. It is higher for summer cottages or other property intended for leisure. Corporate tax called yhteisövero, "community tax", is also a source of income. Some functions are funded both by the municipality and the state, e.g. AMK schools.

The municipal tax, although in principle a flat tax, is affected by deductions, such that the real average tax percentage is lower than the nominal rate. Municipal taxes are collected by the state (Verohallinto) and paid to the municipalities.

Although municipalities do not have police or legislative powers, local ordinances concerning traffic can be set, and municipal parking inspectors can give parking tickets. Municipalities are legal persons and can appear in an administrative court. Likewise, the state of Finland is a separate legal person.

Although there are exceptions, the line between a city and a small town or rural municipality can be drawn at the city of Hamina with 21,402 inhabitants. In the population ranking, above Hamina there are only cities (and their surrounding areas). However, there are many cities with much smaller populations than Hamina. Finland's smallest city, Kaskinen, dates back to 1785 but had a population of only 1,430 (31 January 2011).[1]

The areas of the municipalities vary, as the population is the primary criterion for forming a municipality. The largest are found in Lapland, of which the largest is Inari at 17,333.77 km² (130 km square). The smallest municipalities are very small towns. Kaskinen is an independent town with the land area of only 10.49 km². Kauniainen, which was originally a corporation in Espoo, is only 6.00 km².[2]

Distinctively, the capital area, or Greater Helsinki, has no special arrangements. The area consists of four entirely independent cities that form a continuous conurbation. Greater Helsinki has grown in population and area relatively quickly: the nearby municipalities, considered rural only 50 years ago, have become suburbs, and the growth is projected to continue. A state-imposed merger of Helsinki and a part of Sipoo, a rural, 40% Swedish-speaking municipality adjacent to Greater Helsinki, was recently approved by the government, counter to the opinion of the Sipoo municipal council. This area will effectively become a new (and Finnish-speaking) suburb with multiple times the inhabitants than there are in Sipoo.

There is currently a heated political debate in Finland about reforming the municipality system. Essentially, a large number of small municipalities is seen as detrimental to the provision of public services, having been originated from a time when horses and carriages were used from transport, and there have been suggestions of state-imposed mergers. A committee led by Minister for Regional and Municipal Affairs Hannes Manninen (since April 2007 the post is held by Mari Kiviniemi) has suggested creating a two-tier system of municipalities with different powers, while the Association of Finnish Local and Regional Authorities (Kuntaliitto) favours a system where municipalities would be units of at least 20,000–30,000 inhabitants, cf. the current median at 4,700. The motion has been inspired by a similar reform in Denmark (see Municipalities of Denmark). Former government (Vanhanen II), however, planned to not impose mergers.

Recently, a large number of voluntary mergers have been agreed on.[3] 14 mergers were completed in 2007 and one in 2008. In 2009, there were even more, and many of these mergers consolidated more than two municipalities. Several cities merged with surrounding rural municipalities in Hämeenlinna, Loviisa, Salo, Kouvola, Seinäjoki, Naantali, Kauhava, Lohja, Ekenäs, Jyväskylä and Oulu in 2009. In total, there were 30 mergers, involving 92 municipalities, that reduce the number of municipalities by 62. Four mergers are currently under consideration and may be effected in 2009. The year 2009 also marked the end of the last maalaiskunta, a municipality surrounding a city but sharing the name, in Jyväskylä. 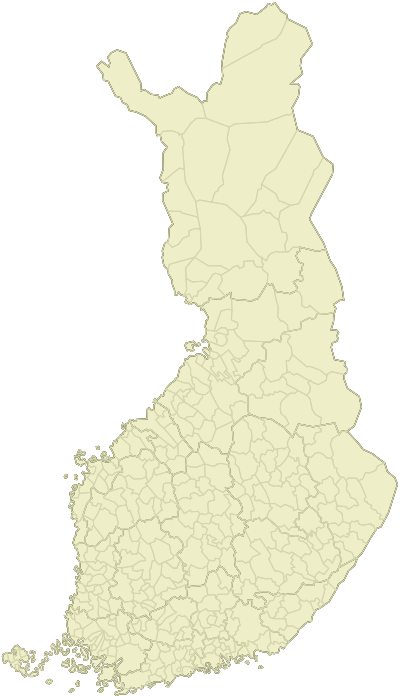 Media related to Municipalities in Finland at Wikimedia Commons