The districts of Germany are known as German: Landkreise, except in the states of North Rhine-Westphalia and Schleswig-Holstein where they are known simply as German: ''Kreise'' (singulars: Landkreis and Kreis).

The districts are at an intermediate level of administration between the Länder (German states) and the counties or the municipal governments (Gemeinden). They are not to be confused with the larger Regierungsbezirk. They correspond to level 3 administrative units of the Nomenclature of Territorial Units for Statistics (NUTS 3).

The title German: "Reichskreis" (Imperial Circle) was given to groups of states in the Holy Roman Empire. 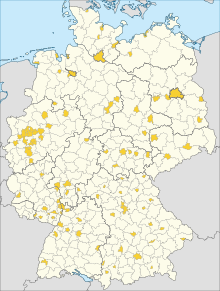 The majority of the districts are rural districts[1] (Landkreise) of which there are 295. Cities with more than 100,000 inhabitants (and smaller towns in some states) do usually not belong to a district, but take over district responsibilities themselves, similar to the concept of independent cities. These are known as urban districts (Kreisfreie Städte / Stadtkreise)—cities which constitute a district in their own right—and there are currently (2011) 107 of them, bringing the total number of districts to 402.

In North Rhine-Westphalia, there are some cities with more than 100,000 inhabitants which are not urban districts, for example Recklinghausen, Siegen, Paderborn, Bergisch Gladbach, Neuss and Moers. These cities, however, take over many district responsibilities themselves although belonging to a district. Moers is the biggest city in Germany (and at present time the only one with more than 100,000 inhabitants) that is neither an urban district, nor takes over district responsibilities.

The districts are responsible for the following:

All these tasks are carried out by local (municipal) authorities operating together. Urban districts have these responsibilities and also those of the municipalities.

The district council, the Kreistag, is the legislative body of the district and is responsible for local self-administration. The parliament is elected directly every five years, except in Bavaria where it is elected every six years.

The executive authority is an officer known as Landrat or Landrätin, who administers the district. In parts of northern Germany, this is also the name of the district administration, which in southern Germany is known as Kreisverwaltung.

The district court, or "Landgericht," is the court that has original jurisdiction in felony criminal cases where the time of imprisonment exceeds 4 years and certain other crimes, and appellate jurisdiction in all other cases. Decisions of the district court can be appealed to the Landesgericht or Oberlandesgericht (state supreme court), depending on the term used in each of the various states.[2] This is similar to judicial proceedings in some US states like Nebraska where all felonies are tried in district courts and misdemeanors originate one level below in county courts.