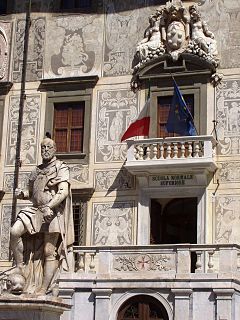 The Scuola Normale Superiore di Pisa, also known in Italian as Scuola Normale (English: Normal School), is a public higher learning institution in Italy. It was founded in 1810, by Napoleonic decree, as a branch of the École Normale Supérieure of Paris. Since its foundation it has operated a highly selective student admission procedure, and its main goal was, during that period, essentially to form the best college and high school teachers. Recognized as a "national university" in 1862, one year after Italian unification, and named during that period as "Normal School of the Kingdom of Italy". During the fascist dictatorship of Benito Mussolini, the philosopher Giovanni Gentile enacted the reform that gave the Scuola its current structure; autonomy from the University of Pisa was granted in 1932. [2] After the war, the Normal School has become an entity separate from the University of Pisa, with complete administrative, didactic and regulative freedom.

The Scuola, together with the University of Pisa and with Sant'Anna School of Advanced Studies, belongs to the Pisa University System. It is one of the three officially sanctioned special-statute public universities in Italy, being part of the process of Superior Graduate School in Italy or Scuola Superiore Universitaria.[1]

The Scuola Normale offers classes in both humanities and sciences. Currently the university offers the following classes : 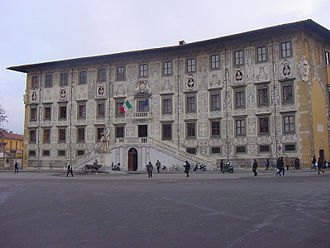 In order to become a student at the Scuola Normale, or normalista, the candidate must pass an extremely selective admissions exam (there are only sixty candidates admitted out of nearly 1000 applicants on average every year), with questions covering the entire chosen field of study. The normalisti receive free housing, free lunches and dinners, and a monthly stipend.

The Scuola does not have a full programme of undergraduate and graduate studies; instead, the students follow the ordinary courses at the public University of Pisa, and complement them with additional classes and seminars taught by the professors of the Scuola Normale. The normalisti are required to score high marks in their exams at the public university (average marks of at least 27/30 and no mark below 24/30) in order to maintain their scholarship. The PhD programme, instead, is separate and completely independent of the degrees at the University of Pisa. The PhD course is called corso di perfezionamento, and the students are called perfezionandi. The perfezionamento, instituted in 1927, is much older than the PhD programme of the Italian public university, instituted in 1980.

The Scuola Normale is located in its original historical building, called Palazzo della Carovana, in Piazza dei Cavalieri, in the medieval centre of Pisa.

Nowadays, students are housed in four dorms located nearby in the city.